Excel's conditional formatting feature can do a whole lot more than many people realize. Susan Harkins runs through 10 practical ways to put this tool to work.

Note: This list is also available as a photo gallery, and you can download a sample workbook (xls and xlsx format) that includes examples of the techniques described here.

Using conditional formatting, you can visually discern when something is breaking a business rule. For example, Figure A shows a simple timekeeping sheet that highlights a workday that’s greater than eight hours. Why? Because your organization requires approval for anything over an eight-hour day.

Working with the time values complicates things a bit, as you can see in Figure B. This solution uses >.34 to represent time values greater than eight hours, which will work in most cases — you can’t use the value 8 or even the time value 8:00. Or you could use the predefined Greater Than rule in Excel 2007 and 2010, which will automatically use the more accurate value of 0.333333….

This formula returns True when a time value is greater than eight hours.

Using conditional formatting (in 2007 and 2010), you can display icons that are often easier to interpret than the values they represent. For instance, a simple checkmark might be quicker to discern than the text value yes, on, true, and so on. Figure C shows an icon solution for the same rule violation in #1.

Use icons instead of traditional formats to represent conditional rules.

First, select the values in column E and apply one of the default icon sets. Then, use Manage Rules to manipulate the results. Figure D shows the final settings (click Reverse Icon Order first).

These settings display green and red icons to alert users to an overtime violation.

3: Highlight a row based on a single value

Filters are great for limiting what you see, but sometimes you want to compare records. When this is the case, conditional formats can distinguish records. Figure E shows a data set of products with a conditional format highlighting only Condiment records.

You can distinguish records based on a single value.

Select the entire data range (not the column headings) so Excel can format the entire record (row). Figure F shows the formula-based settings. The $G2 component creates a relative address, which updates with each row: G4, G5, G6, and so on. When the value in the referenced cell equals the string “Condiment,” Excel highlights the entire row.

You can highlight a row by applying the conditional format to the entire data range instead of a single column.

Let users choose the highlighted category from a validation list.

This rule references the validation list instead of a literal string value.

It’s common to compare values. For instance, you might track inventory levels by comparing the stock on hand to a reorder level. Using conditional formatting, you can alert users when it’s time to reorder, as shown in Figure J. Select the values you want to format — in this case, that’s B2:B46. (You could highlight the entire row or one of the inventory values.) Then, apply the format shown in Figure K.

Highlighted items that are running low.

This rule highlights the product in column A when the in stock value goes below the reorder level.

Apply this rule to compare the two side-by-side lists.

Many sheets highlight every other row (banding) to improve readability. The Table feature offers several predefined formats that include bands, but you end up with a table instead of a plain data set, and that might not be what you want. When you don’t want a table, use conditional formatting to create alternating bands, as shown in Figure N. The rule shown in Figure O highlights cells to achieve the alternate band effect. 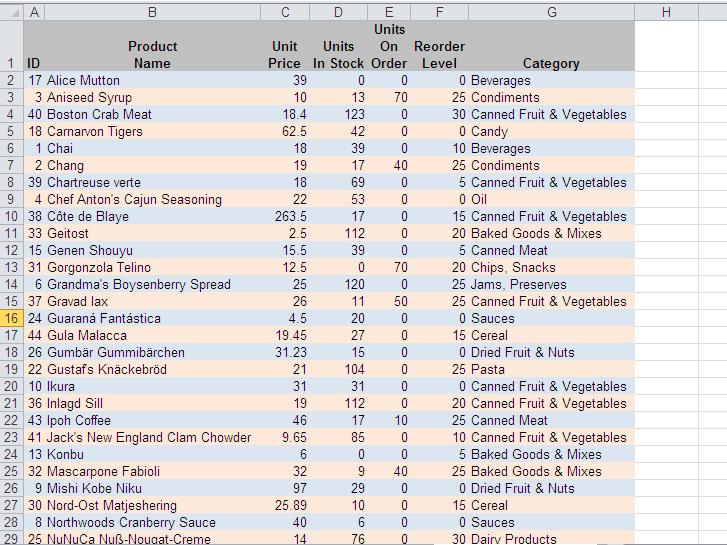 Banding can improve readability, but you’ll probably want to highlight even or odd rows and not both, as shown here.

Apply either of these rules to create an alternate band effect.

This rule highlights all occurrences of the same value.

To ignore the first occurrence and highlight only subsequent values, use this formula:

If you want to check for duplicate values across multiple columns, concatenate the values and apply a similar rule to the results, as shown in Figure R. You can also hide duplicates (which I don’t always recommend) by selecting a font color that matches the sheet’s background.

You can use Excel 2007 and 2010’s built-in Find Duplicates rule, but it has a few limitations. First, you don’t have much flexibility with the actual formats. Second, this rule selects all duplicate values; you can’t choose to ignore the first occurrence and highlight just the subsequent values, as this more flexible formula-based rule can.

Verifying data is an important task, and Excel’s conditional formatting can help by alerting you to inconsistencies. Figure S shows a common accounting tool known as cross-footing — the process of double-checking totals by comparing subtotals across rows and columns — in cell F16. Adding the conditional format makes the discrepancy hard to miss when the two totaling values don’t match. Select either of the cross-foot formulas and apply the rule shown in Figure T.

Combine conditional formatting with cross-footing for a hard-to-miss alert.

10: Find the smallest or largest duplicate

This option finds the smallest or largest value in a range.

A more complex rule highlights the smallest or largest duplicate value in a range.

This rule is unstable if you use normal referencing, so apply a range name to your data set before applying the conditional formatting rule. The rule shown in Figure W will highlight the value 3 in the range named List only if 3 is also a duplicate. To find the largest duplicate value, substitute the MIN() function with MAX().

This rule ignores the smallest value unless it’s also a duplicate value.

Affiliate disclosure: TechRepublic may earn a commission from the products and services featured on this page.

Share: 10 cool ways to use Excel’s conditional formatting feature
By Susan Harkins
Susan Sales Harkins is an IT consultant, specializing in desktop solutions. Previously, she was editor in chief for The Cobb Group, the world's largest publisher of technical journals.