Aaron Swartz, activist for Internet freedom: You will be missed

Congress shall make no law respecting an establishment of religion, or prohibiting the free exercise thereof; or abridging the freedom of speech, or of the press; or the right of the people peaceably to assemble, and to petition the Government for a redress of grievances.

The First Amendment to the United States Constitution seems clear. Yet:

There’s a battle going on right now, a battle to define everything that happens on the internet in terms of traditional things the law understands…

If we lost the ability to communicate with each other over the internet, it would be a change to the Bill of Rights, the freedoms guaranteed in our Constitution.

New technology, instead of bringing us greater freedom, would have snuffed out fundamental rights we’d always taken for granted.

Those quotes are from Aaron Swartz. Aaron has been called many things; boy genius, hacker, overly aggressive activist, and an emotionally troubled young man.

Regardless of what you think, Aaron and a handful of concerned activists quickly spread the word about a proposed law — with proponents forecasting easy passage by a hitherto deadlocked Congress — that experts of constitutional law considered a direct violation of our First Amendment rights:

Conceivably, an entire website containing tens of thousands of pages could be targeted if only a single page were accused of infringement. Such an approach would create severe practical problems for sites with substantial user-generated content, such as Facebook, Twitter, and YouTube, and for blogs that allow users to post videos, photos, and other materials.

The bill/s went by many names. It started out as Combating Online Infringement and Counterfeit Act (COICA), next as Protect IP Act (PIPA), and finally as Stop Online Piracy Act (SOPA). You probably are most familiar with SOPA. Remember when Wikipedia and other prominent websites participated in American Censorship Day:

That unprecedented show of unity was aimed at stopping the passage of SOPA. Proposed laws like good novels have protagonists and antagonists. Wikipedia provided an overview of both sides: 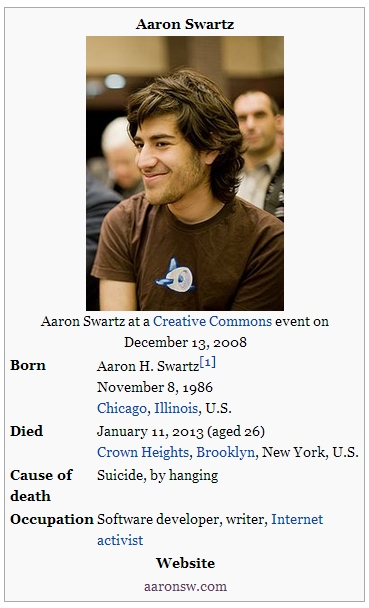 I first learned of Aaron Swartz several years ago from friend Cory Doctorow; a privacy activist and gifted science-fiction writer. It was also from Cory I learned Aaron took his own life on January 11th. Cory’s tribute is particularly moving, as Cory knew Aaron for twelve of his 26 years:

I’m so sorry for Aaron, and sorry about Aaron. My sincere condolences to his parents, whom I never met, but who loved their brilliant, magnificently weird son, and made sure he always had chaperonage when he went abroad on his adventures.

My condolences to his friends, especially Quinn and Lisa, and the ones I know and the ones I don’t, and to his comrades at DemandProgress. To the world: we have all lost someone today who had more work to do, and who made the world a better place when he did it.

If I may, I would ask that you watch the YouTube video Cory linked of Aaron giving his now famous “How we stopped SOPA” talk last May at Freedom to Connect 2012 in Washington D.C.

It will give you an idea of how SOPA nearly became a law, and the amazing groundswell of people — more than 325,000 — who joined Aaron’s petition drive on the Demand  Progress website created specifically to fight COICA/PIPA/SOPA.

I admire those who have the courage to publicly take a stance, and then back it up with action. To our benefit, it worked. Politicians began receiving immense pressure by a now-informed public that SOPA was a bad bill, and they quickly tabled it.

Still, Aaron cautioned us near the end of his “How we stopped SOPA” speech:

It will happen again. Sure, it will have yet another name, maybe a different excuse, and probably do its damage in a different way. But make no mistake; the enemies of the “freedom to connect” have not disappeared.

I keep wondering about something. If SOPA had passed, could/would websites like Demand Progress have been added to the black list?

I think we owe it to Aaron, all of those who worked tirelessly to get the word out, and finally ourselves to remain alert and challenge anything that would erode the freedoms our Founding Fathers and Mothers have fought and died for.

In his SOPA talk, Aaron mentioned numerous times he did not do it alone, other individuals and organizations played a huge role — particularly the Electronic Freedom Foundation. I also wanted to thank Cory Doctorow for sharing his website, and Wikipedia for use of their slide.

Share: Aaron Swartz, activist for Internet freedom: You will be missed
By Michael Kassner
Information is my field...Writing is my passion...Coupling the two is my mission.