Add a second monitor to Windows the easy way with MaxiVista

In this edition of the Windows Desktop Report, Greg Shultz introduces you to MaxiVista, an application that will allow you to turn any networked system into a second monitor of your primary system. 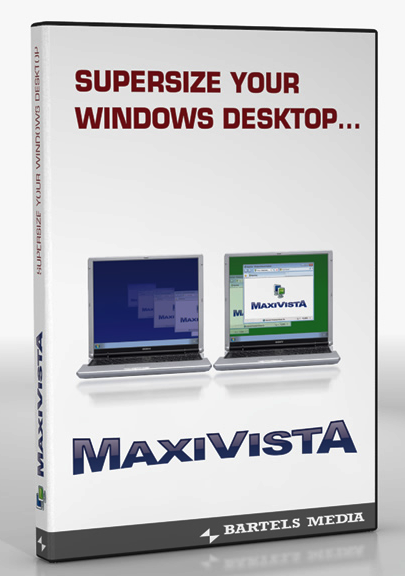 Well, what if I told you that if you have another computer positioned close to your main Windows 7 system, you could easily set up multiple-monitor configurations with nothing more than a network connection? It’s true! With MaxiVista from Bartels Media you can add the monitor on that other system to your Windows 7 system and create a virtual multiple monitor. All you need between the two PCs is a network connection — no additional hardware required!

This will allow you to turn any networked system into a second monitor of your primary system. Or, if you already have a multiple-monitor configuration, MaxiVista will allow you to add an additional virtual-graphics adapter to your existing setup.

In this edition of the Windows Desktop Report, I’ll introduce you to MaxiVista. As I do, I’ll tell you about some of this program’s impressive features.

Of course, the first question on your mind is, how does it work? Well, in a nutshell, to work its magic, MaxiVista runs on two PCs with the primary PC running as a Server and the secondary PC running as a Viewer. The Server creates a virtual-graphics adapter that then seeks out the Viewer on the network. Once the connection is established, the Viewer allows the Sever’s virtual-graphics adapter to take control of the monitor on the secondary system.

Using what Bartels Media calls state-of-the-art compression algorithms, MaxiVista transfers only the changing regions between single frames of the secondary display content over the network. The end result is so fast and seamless that you would swear that the monitor is connected to your primary PC. And, because MaxiVista’s data protocol is optimized for local networks, there is no noticeable degradation in your network performance.

MaxiVista runs on the 32-bit and 64-bit versions of Windows XP, Windows Vista, and Windows 7. Now, Bartels Media encourages you to start with the free Demo version before purchasing the full version in order to make sure that MaxiVista performs as expected in your system environment.

Another reason is that the Demo version features an extended installation wizard that walks you through a very thorough step-by-step procedure that is very helpful in ferreting out any potential stumbling blocks. The demo version runs for 14 days after first installation or the first 50 program launches — whichever comes first.

If you like what you see in the Demo, you can then purchase one of the real versions: Standard, Professional, or Mirror Pro. The Standard version, which sells for $39.95, just provides monitor extension to a single secondary PC. The Pro version, which sells for $49.95, allows you to connect up to three secondary PCs, thus adding three monitors to your virtual multiple-monitor configuration. The Mirror Pro version ($99.95) adds Desktop Mirroring, which allows you to mirror the screen of one PC on another PC. Check out the comparison page for features and pricing information of the various versions.

If you are using Windows 7 or Windows Vista, there is one caveat. MaxiVista supports only the classic display mode. The Aero display mode is temporarily disabled by the operating system while MaxiVista is running. Aero is re-enabled immediately after closing MaxiVista.

Installing the Server and Viewer programs

Once you obtain a copy of MaxiVista, installation is a relatively simple procedure. However, it is very important that you pay careful attention to all the information presented on-screen as well as in the Software Installation section of the online user manual. For example, if you have DisplayFusion or UltraMon installed, you will have to exit the program before you install MaxiVista in order to avoid conflicts.

If you download the Demo version, you’ll receive a ZIP file that contains two executable files — one for the primary or Server program and one for the Viewer program — and will run each one on the appropriate system. If you purchase the Professional version, you’ll receive a single executable installation file that installs the Server program and then prompts you to create the Viewer program file(s) the first time that it is run.

In either case, the installation procedure of the Server program operates via a standard Wizard interface and consists of several steps. Keep in mind that during the installation procedure, your monitor will flash repeatedly and will even blank out for a moment. This is normal as the software is integrating its virtual-graphics adapter into the operating system’s native support for multiple monitors and then reorients the display system. Once the installation procedure is complete, you’ll be prompted to reboot before you run the program for the first time. This last step is extremely important, so don’t skip it!

After your system reboots, you can launch the Server program. When you do, you’ll encounter a prompt from your Firewall program asking if it is OK to allow MaxiVista to communicate on your network.

You’ll see the MaxiVista icon appear in the Notification area. The icon consists of two monitors, and you’ll notice that one of the monitors in the icon will periodically flash yellow. This indicates that the Server program is actively searching the network for a system that is running the Viewer program. Hover your mouse pointer over the icon and you’ll see a pop-up that says: MaxiVista is searching for the Viewer program on the network.

You can then copy the Viewer program to another system and simply run it — there’s no installation procedure for the Viewer. However, keep in mind that you’ll encounter a prompt from your Firewall program asking if MaxiVista is safe. As soon as you allow MaxiVista access to the network, you’ll see the MaxiVista Viewer icon in the system tray.

The Server program will then find the Viewer program and establish a connection. Keep in mind that this procedure will also cause the monitor on the Server and Viewer systems to flash and blank out for a moment as the software integrates its virtual-graphics adapter into the operating system and reorients the display system as a secondary monitor.

Once the connection occurs, you’ll see one of the monitors in the icon in the system tray of the Server system stop flashing and remain a solid green to indicate that the connection has been established. You’ll then see that the secondary monitor is now showing the desktop on the primary monitor. When you launch MaxiVista for the first time, you’ll see the Optimize Performance dialog box shown in Figure A. Just click the Optimize Now button and allow MaxiVista to optimize itself for your network.

MaxiVista will prompt you to run the Network Parameter Optimizer.

Once you begin using MaxiVista to take advantage of the monitor on another system, you’ll soon discover that MaxiVista comes with a whole slew of features that allow you to configure and control the virtual-graphics adapter. Let’s take a look.

In addition you’ll find that some features of third-party multiple-monitor utilities will also work with MaxiVista’s virtual-graphics adapter. For instance, all the features in DisplayFusion, such as the Taskbar, work perfectly with MaxiVista.

If you have an iPad, you can get the iPad MaxiVista app at iTunes for just $9.99, and turn your iPad into an extended monitor for your PC. You can see a demo of this app on YouTube.

Do you have another PC sitting around that could be put to better use as an additional monitor on your main system? If so, do you think that you will investigate MaxiVista? As always, if you have comments or information to share about this topic, please take a moment to drop by the TechRepublic Community Forums and let us hear from you.

Share: Add a second monitor to Windows the easy way with MaxiVista
By greg shultz
My first computer was a Kaypro 16 \"luggable\" running MS-DOS 2.11 which I obtained while studying computer science in 1986. After two years, I discovered that I had a knack for writing documentation and shifted my focus over to technical writing.