Add a self-made Start button to the Windows 8 desktop

Greg Shultz shows you how to create the CLSID shortcut to the Apps screen and set it up like a Start button.

After my You don’t really need a Start Menu in Windows 8 article was published, the ensuing discussion really took off sprouting points from both sides of the issue. It seems that a lot of people are really ticked off that the Start menu is no longer a part of the operating system. While my guess is that a lot of those folks will opt for a Start menu replacement, such as StartW8, Classic Shell, or Start8, I heard from plenty of others who stated that they were willing to give the new Start screen and Apps screen a shot even though they lamented the passing of the Start menu.

As you probably know by now, my method of choice for launching applications in Windows 8 it to press the [Windows] on my keyboard, which immediately brings up the Apps screen along with the Search panel into which I just type the first few letters of the application that I want to launch. While some folks like that technique, others detested the thought of typing anything into a GUI in order to launch an application. They’d much rather just click with the mouse. Thinking that was a reasonable request, I began investigating a way to create a shortcut that would allow you to directly access the Apps screen with a simple click of the mouse.

So using this technique, you can just click a Start button to bring up the Apps screen and then click the icon of the application you want to launch. No keyboard, no shortcut keystrokes, just mouse clicks. And, best of all, if you implement the technique I showed you in the article Make Windows 8 boot straight to the desktop, you’ll basically have a Windows 7 style interface in Windows 8 without having to use any third-party utilities.

In this post, I’ll show you how to create the CLSID shortcut to the Apps screen and set it up like a Start button.

While you won’t have to go traipsing around the registry in order to implement this technique – I already did that – you may be curious as to where the CLSID came from. Essentially, a CLSID key is a part of the registry that contains code that provides access to specific system objects in the operating system, such as system folders. The CLSID keys can be found in two places in the Registry:

Now, under normal circumstances, you would never need to use a CLSID because it is specifically designed to be used by developers and the operating system. In fact, a CLSID is a 128 bit Hexadecimal number enclosed in braces, so it’s not very user friendly.

In any case, the CLSID that provides access to the Apps screen is

To use the CLSID to launch the Apps screen, you’ll use the Shell command. In order to launch a Shell command from a shortcut, you need to use the explorer.exe command. As such, the shortcut to launch the Apps screen consists of the following command line. (Take note that there are three colons between the word shell and the left brace. Also keep in mind that there is only one space in the whole command line between the .exe file extension and the word shell.)

To create the shortcut, just open the Documents folder, right-click on the background, and choose the New | Shortcut command. When you see the first screen in the Create Shortcut wizard, type the shortcut in the text box, as shown in Figure A. Then, click Next. 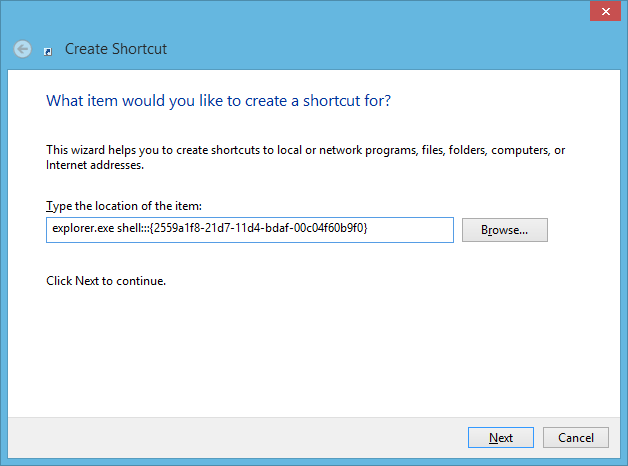 As you type the shortcut, beware of typos.

When you see the second screen in the Create Shortcut wizard, type a short name for your shortcut. As you can see in Figure B, I named my example shortcut Apps. To complete the wizard, just click Finish. 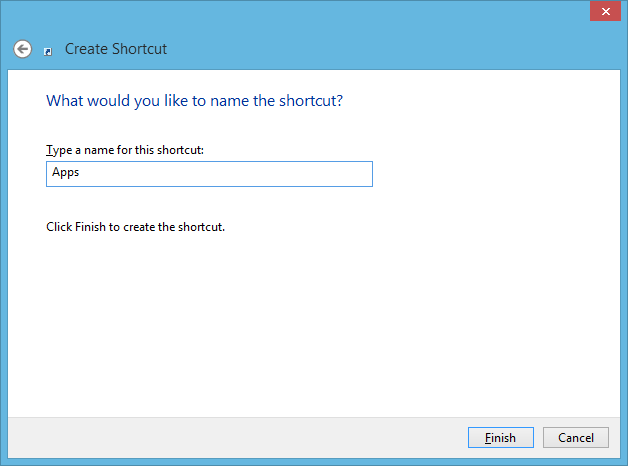 Just use a short name for the shortcut.

As soon as you see the shortcut icon, right click on it and select the Properties command, as shown in Figure C. 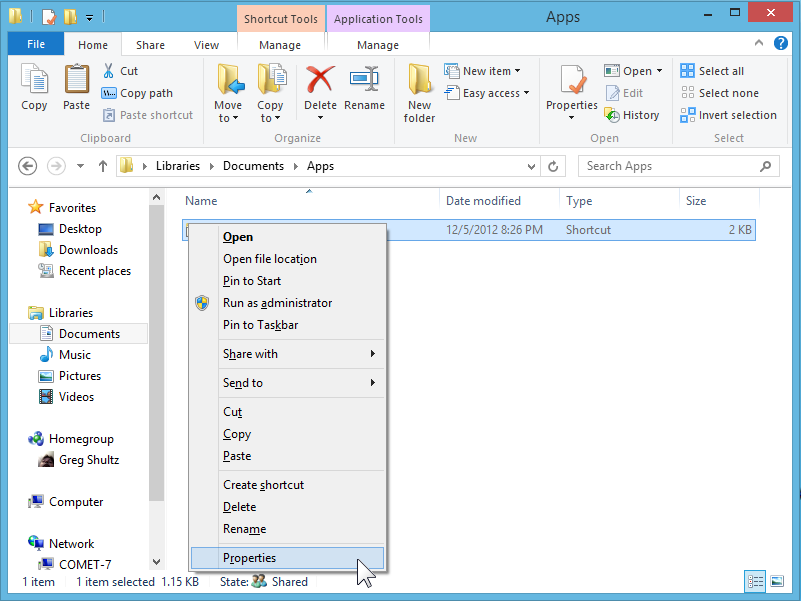 Right click on the shortcut and choose the Properties command. 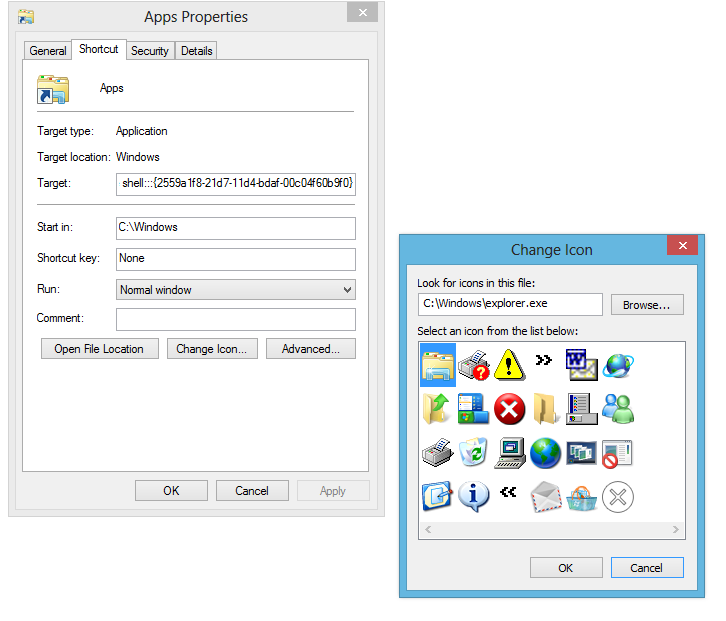 By default, the Change Icon dialog box displays the icons from the explorer.exe.

I first found a nice Windows flag in the imageres.dll file (C:\Windows\System32.dll) that I considered using, but then I remembered the green Orb icon from Windows Media Center was very nice and found it in the ehshell.exe file (C:\Windows\ehome). Both are shown in Figure E. 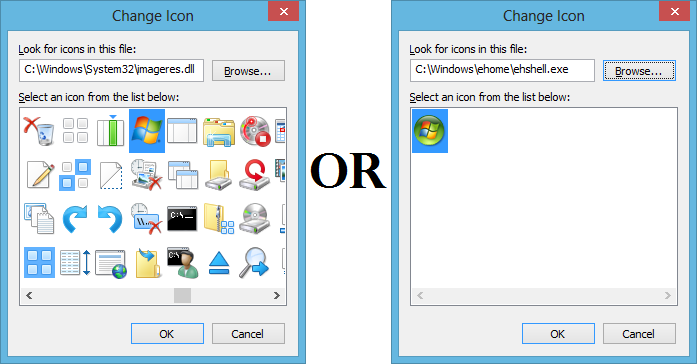 I ended up choosing the Windows Media Center icon because it resembles the Start button but since it is green, it is different from the blue Windows 7 icon. Of course, you can use any icon that you prefer. As soon as you choose your icon, right click on it and then select the Pin to Taskbar command, as shown in Figure F. 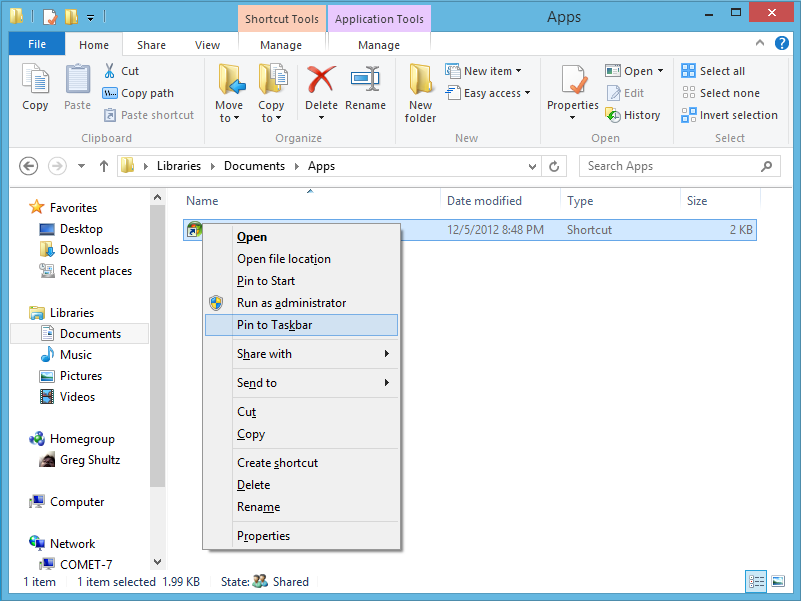 Select the Pin to Taskbar command.

Once your custom Start button appears on the taskbar, drag it all the way to the left side of the taskbar, as shown in Figure G. As you can see, using the green Orb icon and positioning it at the end of the taskbar really makes the desktop look like Windows 7. 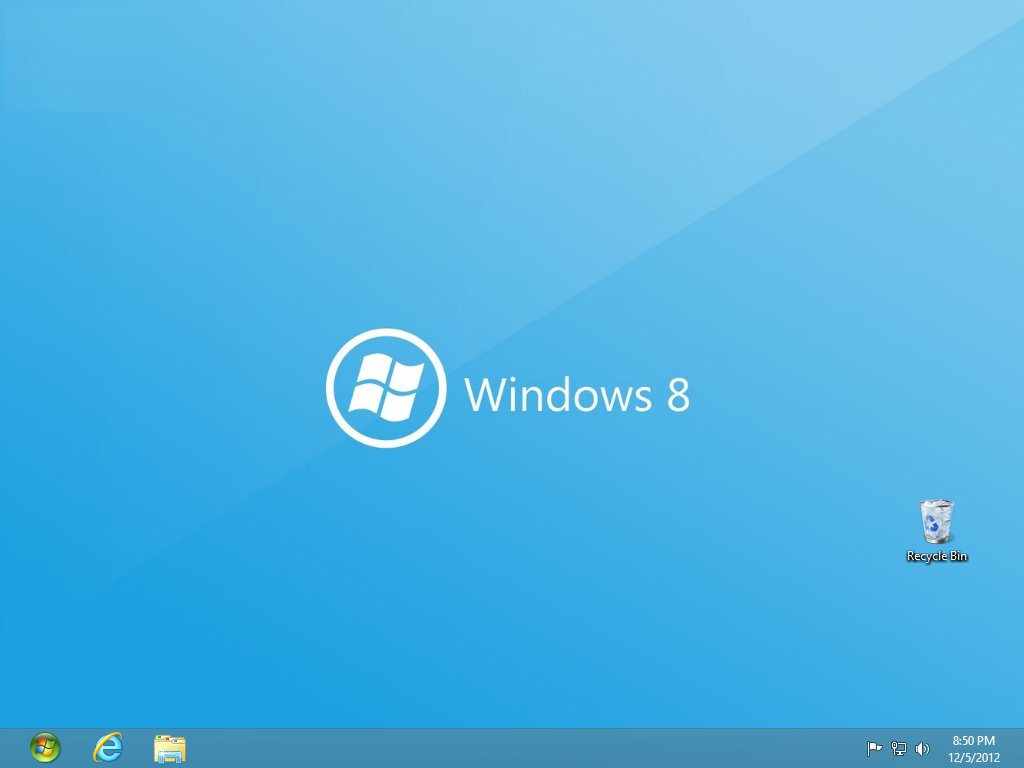 Drag the pinned icon to the left side of the taskbar.

Now when you click your custom Start button, the Apps screen will appear, as shown in Figure H. You can then click once to dismiss the Search panel, and then select the icon of the application that you want to launch. And, as I mentioned, if you combine this custom Start button technique with the trick I showed you in the article Make Windows 8 boot straight to the desktop, you’ll basically have a Windows 7 style interface in Windows 8 without having to use any third-party utilities. 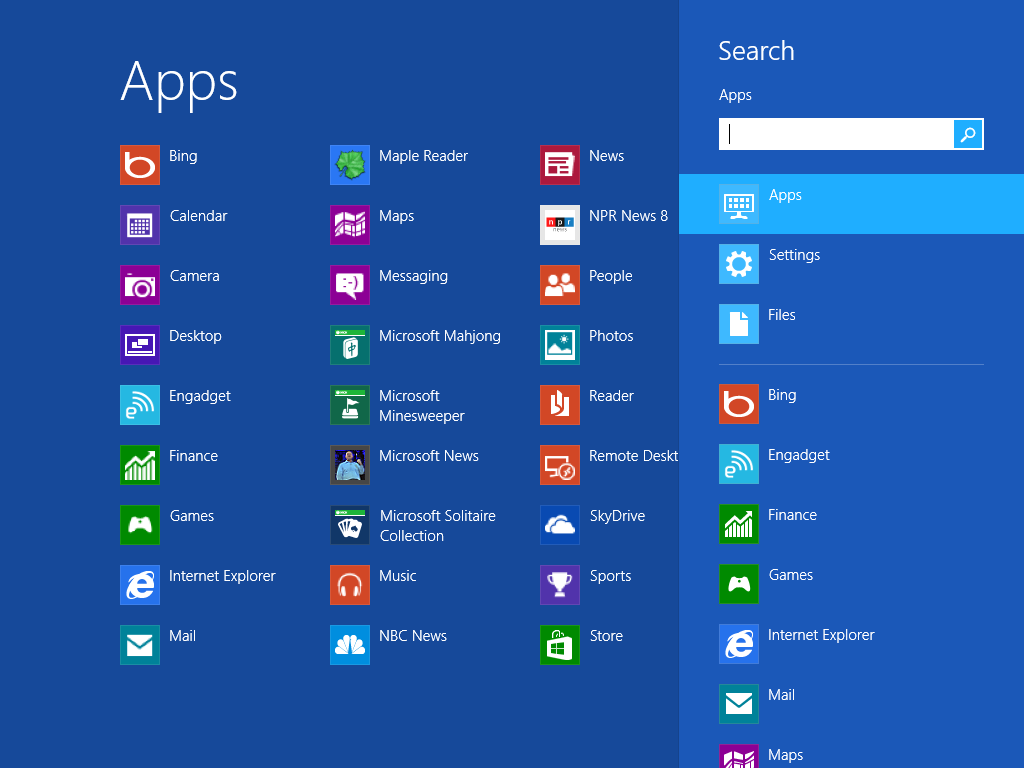 Clicking your custom Start button brings up the Apps screen.

What do you think about creating a Start button to access the Apps screen in windows 8? Will you try it? As always, if you have comments or information to share about this topic, please take a moment to drop by the TechRepublic Community Forums and let us hear from you.

Share: Add a self-made Start button to the Windows 8 desktop
By greg shultz
My first computer was a Kaypro 16 \"luggable\" running MS-DOS 2.11 which I obtained while studying computer science in 1986. After two years, I discovered that I had a knack for writing documentation and shifted my focus over to technical writing.