Google unveiled Android 4.0 "Ice Cream Sandwich" on Wednesday and showed off lots of eye candy. Here's a look at the useful stuff.

Google and Samsung teamed up for a joint announcement on Android 4.0 “Ice Cream Sandwich” in Hong Kong on Wednesday. Samsung was involved because it’s manufacturing the first Android 4.0 device, the Galaxy Nexus, which becomes the latest “Google phone,” following in the footsteps of the Nexus One and the Nexus S. 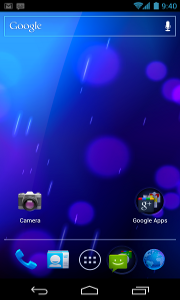 Thankfully, the announcement was dominated by updates about Android 4.0, which reunites the platform around one OS for both smartphones and tablets. On Wednesday, Google was mostly talking about Android 4.0’s smartphone features and there were a lot to like.

While Google showed off plenty of the improvements were just eye candy, here’s my list of eight new features in Ice Cream Sandwich that will actually be quite useful:

This is a secure peer-to-peer sharing mechanism using NFC that lets you quickly send content or information from one Android device to another. My colleague Larry Dignan said it reminds him of using IR to beam a digital business card on the old Palm devices.  Hopefully, Beam will prove to be more versatile and reliable.

Android 4.0 integrates its own built-in tools for tracking and controlling your data usage so that you don’t go over your data plan cap and owe your carrier extra money at the end of the month. This is more important than ever with the inevitable advent of usage caps in 4G.

There’s a new “voice input engine” in Ice Cream Sandwich that allows you to dictate an extended message like an email or a text message. Don’t confuse this with the iPhone’s new Siri digital assistant, but it could be a very useful feature for when you’re in the car.

Google has introduced facial recognition to its unlock screen. Instead of using a PIN or pattern recognition, you can now choose facial recognition as your login/unlock method. In the demo at the announcement, the feature failed, so this could need a couple iterations before it works smoothly.

Android already has copy-and-paste but the various Android skins from the OEMs (and even some apps) implement it differently. In Android 4.0, Google has improved the feature and made it universal.

When you receive a call but choose to send it to voicemail, you can now select from a series of canned messages (like “Sorry, in a meeting” or “Call me back in 20 min”) and an automatic text message will be sent to the caller.

You can now take screenshots in Android by holding down the power and volume-down buttons. Thank you! This is especially helpful for us journalists, but it’s also useful for IT and business pros who need to put together documentation or show an employee how to do something in Android. No longer do we have to install the whole SDK just to take a simple screenshot.

The camera app has gotten a big upgrade. Google promises “continuous focus, zero shutter lag exposure, and decreased shot-to-shot speed.” I have my doubts about zero shutter lag, but if they’ve improved significantly on the laggy camera app in most Android phones then it will be a welcome upgrade.

The first Android 4.0 device, the Galaxy Nexus, will arrive in November. Here’s what the details look like:

Share: Android 4.0: Eight new features that actually matter
By Jason Hiner
Jason Hiner is Editorial Director of CNET and former Editor in Chief of TechRepublic. He's co-author of the book, Follow the Geeks.