A reader asked for a comparison of Shark007 and K-Lite and Matt Nawrocki obliged.

Back in June, I reviewed a software package that gives Windows a much needed booster shot in the audio and video codec department, allowing one to watch or listen to content in formats not typically supported out of the box by Windows Media Player. At the request of one of my readers, who goes by the handle “craigkra” on TechRepublic, I was asked to make a blow-by-blow comparison of Shark007 and another codec pack I had never heard of before, called K-Lite.

Since it’s always good to find the best software for any given situation, I decided to give K-Lite a whirl and note any differences. Each codec pack was tested in a clean install of Windows by themselves so as not to mess with the results. And now, I present to you all an epic codec pack comparison showdown!

I went to the developer sites for Shark007 and K-Lite respectively in order to retrieve the codec packs. In terms of site quality, Shark007’s page lacked a great deal in coherency and was a bit too “noisy”. K-Lite’s site on the other hand made it very easy for me to find exactly what downloads I needed to get for my version of Windows.

Another point in K-Lite’s favor is the fact that, unlike Shark007 where the installation had to be done exactly a certain way in order to make the new codecs recognizable in Windows, particularly 64-bit editions, K-Lite could be installed in any way, shape or fashion with all the defaults left as they are, regardless of what edition was ultimately installed. K-Lite also offers “variants” ranging from a basic barebones codec-only package to one that offers extra bells and whistles, such as a nifty third-party media player and extra DirectShow filters.

Oh and one final point I should make. Although I understand Shark007 wants to make some revenue on the side, having to uncheck boxes for toolbars during installation is rather annoying. I believe it should be an opt-in only thing and it gives Shark007 a more spammer-friendly vibe, which is a major turn off all around.

After going through the paces with several different file formats, including MKV, MP4 (h.264) and OGM for video as well as OGG and FLAC for audio, both Shark007 and K-Lite played the files without any difficulty. Of course, it is imperative to note that on 64-bit Windows, if 64-bit versions of the codec packs are installed but not their 32-bit counterparts, 32-bit media players simply will not be able to take advantage of the added codecs. Windows Media Player comes as a 32-bit app, even in 64-bit Windows, so it’s important to keep in mind. 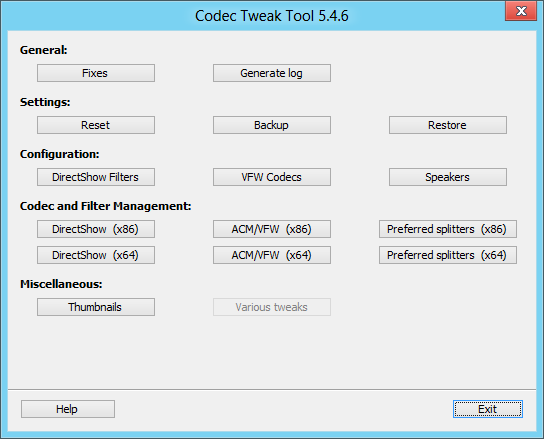 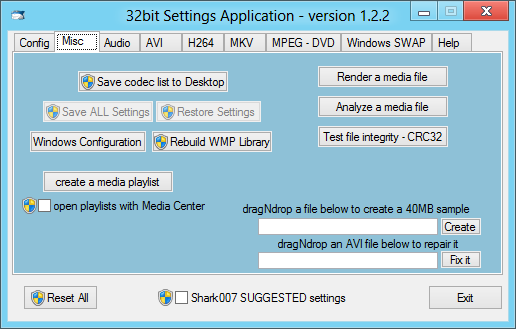 When I fired up the configuration panels for both codec packs, both were packed with oodles of different options and settings to change at will. At first glance though, Shark007’s panel, much like the product website page, looked way too busy and overwhelming, whereas the K-Lite panel was much cleaner and a bit more coherent in its layout. Another annoyance I found with Shark007 was the fact that there was a separate control panel for 32-bit and 64-bit versions. K-Lite, with its single configuration area, handles both versions at the same time and everything can be accessed from one place, for the sake of simplicity. K-Lite gets another point here in my book.

Both Shark007 and K-Lite offer excellent and well-staffed support forums, should you have any issues, questions or concerns regarding the respective codec packs. In fact, thanks to Shark007’s support forms, I was finally able to figure out what exactly I needed to do to get up and running on one system as well as fix some odd playback bugs that hampered on my experience using their solution.

At the end of the day, I’m going to end up siding with K-Lite’s package over Shark007, for the simple reason that I didn’t have to wade through a site trying to get the correct downloads as well as some of the initial playback bugs I encountered. When both products are configured properly however, I was able to get pretty much anything I threw at Windows Media Player to play back with relative ease, and that’s always a good thing of course. Ultimately, depending on your system and preferences, your mileage will vary. Don’t forget to opine with your experiences, tips and questions in the comments section below.

Share: App face-off: Shark007 versus K-Lite codec packs
By matthewnawrocki
An avid technology writer and an IT guru, Matthew is here to help bring the best in software, hardware and the web to the collective consciousness of TechRepublic's readership. In addition to writing for TechRepublic, Matthew currently works as a Customer Success Professional for Ultimate Software in Santa Ana, California.