If you’re interested in the Apple iPad, you’ve probably read the initial reviews. Here is TechRepublic’s real world review, from a business perspective.

You can watch it as a video, or read the full text below.

We’ve had tablet computers like the one below from Hewlett-Packard since Microsoft unveiled its Tablet PC platform back in 2001. At that time, Microsoft Chairman Bill Gates said of the tablet, “It’s a PC that is virtually without limits and within five years I predict it will be the most popular form of PC sold in America.”

Hewlett-Packard Tablet PC (circa 2001) next to the Apple iPad. Photo by Jason Hiner.

Obviously, that never happened. But those tablets were based on pen computing, which involved using a digital stylus in place of a mouse and keyboard, while the iPad – and a new generation of PC tablets that will be emulating it – are based on a more natural touch-screen interface, which has already proven itself to be user-friendly in smartphones like the Apple iPhone, Palm Pre, and Google Android devices. Still, the question remains whether touch tablets will succeed where pen tablets failed. 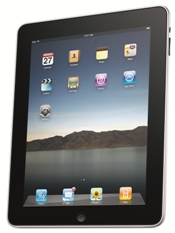 1. Compelling form factor: The iPad is remarkably thin and minimalistic for such a powerful computer. Compared to a laptop, the device is more portable and a little more accessible to use, especially for employees who typically don’t have good luck with technology.
2. Long battery life: The killer feature of the iPad may be the fact that it gets over 10 hours of battery life in the real world. That means you almost never need to charge it in order to make it through an entire day, and it easily makes it through an entire coast-to-coast flight across the U.S.
3. Excellent reading device: Within a week of testing the iPad it quickly became my preferred option for reading PDFs, business books, and even long articles from the Web. That’s mostly because the iPad has an excellent hi-res screen and it gives you a little more freedom to read in the places you’d typically read a physical newspaper or magazine – although it’s not as great in bright sunlight outdoors.
4. Good speed: The computing performance of the iPad is surprisingly good. Almost all functions are noticeably faster on the iPad than on most smartphones. And, compared to a laptop, the iPad turns on instantly and opens apps within a few seconds.

1. Limited to light computing: While the iPad has plenty of horsepower to handle lots of different computing tasks, its lack of keyboard and mouse limit its power as a data entry device. I had a colleague who experimented with using the iPad as a complete PC replacement at work and he felt like he was at about two-thirds of his normal productivity.
2. Imprisoned in the Apple ecosystem: While Apple has made efforts to make its iPhone OS (which powers the iPad) more friendly to the enterprise, the fact is that the iPad is still tied to iTunes software for many of its basic functions and is not a stand-alone computer. That is a huge turn-off to many businesses and IT departments.

All in all, versatility is one of the things that makes the iPad great. You can use it to read big PDFs, look at business reports and dashboards, view video clips, quickly scan through emails and calendars, and pull up full Web pages – all in the palm of your hand. The problem is that the iPad is not necessarily fantastic at any one function. As a result, the iPad and other touch tablets like it will need to make the ROI case to businesses and IT departments based on ease-of-use, which could possibly save on training and troubleshooting, for example.

Delivered Weekdays
Sign up today
Share: Apple iPad: The business review
By Jason Hiner
Jason Hiner is Editorial Director of CNET and former Editor in Chief of TechRepublic. He's co-author of the book, Follow the Geeks.