Wil Limoges talks about the iPhone 4S features that he thinks are the most significant. 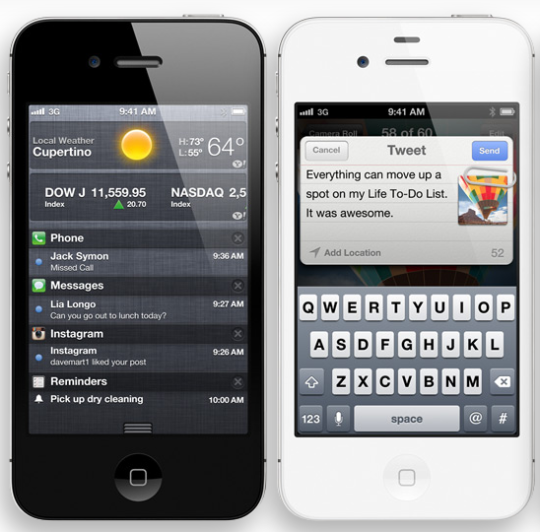 If you missed all the buzz, here is a quick run down of some of the significant features that we will see in the iPhone 4S and iOS 5.

As far as an upgrade is concerned the iPhone 4S doesn’t appear on the surface very different from the iPhone 4, however, the internals have been completely overhauled.
Powering the iPhone 4S is the dual-core A5 chip currently used in the iPad 2, aiding in running and launching applications much more quickly, as well as providing a significant upgrade to on-screen graphics which future games and graphic applications will take advantage of.
The camera in the iPhone 4S has also been updated to 8 megapixels and has a custom five lens configuration along with a larger aperture providing sharper images and which will allow the iPhone 4s to take better pictures in low light situations. The new camera also allows for faster image capture thanks to the A5 processor as well as 1080p video recording.

Another addition to the iPhone 4S’s hardware is that the phone can now use both CDMA as well as GSM. This is huge in so many ways. Consider this, you purchase your iPhone 4S and later on down the road you no longer want to stay with AT&T for whatever reason. Before iPhone 4S, your only option would have been to switch from AT&T to T-Mobile by hacking your phone or purchasing a new iPhone on Verizon’s network. Now with the iPhone 4S, you not only can migrate from AT&T to Verizon, technically, you can move to any of the four networks. How this will actually play out once the phone hits the market is yet to be seen but it is likely that at some point Apple will offer a contract-free unlocked version of the iPhone 4S as it has in the past.
The second advantage to having both CDMA and GSM capabilities is that the iPhone 4S is now a world phone. What this means is there are truly no limits to where you can go with your phone so long as the location has coverage by any cellular carrier in the world. Beyond that it also will allow you to roam between the two network types, so if you find that you are in an area where there is limited coverage by one network such as AT&T, it is possible for you to switch to Verizon or Sprint’s network if they have coverage in that area.
The last but definitely not the least of the iPhone 4S hardware updates I’m going to discuss is the wireless switching capability of the phone. The iPhone 4S can intelligently switch between two antennas when sending and receiving data, allowing the device to appear to have 4G-like speeds on the slower 3G network. It probably won’t be long before other vendors follow suit, but this is a clear advantage because Apple can advertise its handset as having 4G speeds with the power consumption of a 3G handset.
The iPhone 4S has many new tricks up its sleeve and in no time we will have assimilated these tricks into our daily lives. The iPhone 4S with all of the great new hardware will have the potential to further propel Apple as the number one smartphone producer in the world.

Share: Apple iPhone 4S: Digging into the hardware updates
By wil limoges
Wil Limoges is a Louisville, KY freelance web designer and Digital Savant at the vimarc group. He has had the pleasure of working for Apple as a Genius, loves science, and aspires to make great things!