From Apple blunders, to the unleashing of Siri and the great Apple TV set puzzle...

Will Apple revert to a summer launch for the next iPhone, which it used for everything bar the iPhone 4S?Photo: Apple

With a new leader and a strong product range, what will be the key factors affecting Apple’s direction and strategy in 2012? Seb Janacek offers his take on the year ahead for the world’s largest tech company.

Apple forecast monster revenues of $37bn for Q1 2012 at its last quarterly results call. Expect that lofty figure to be surpassed. The company has an $81bn cash stockpile, but could it pass $100bn in 2012?

Apple’s coffers will be boosted by sales buoyed by huge pent-up demand for a new iPhone and strong sales of iOS devices over Christmas. Over 1.2 billion apps were downloaded in a single week in the last days of December, according to analytics firm Flurry, as millions of users tried out new iOS and Android devices.

Equally predictable is that despite the record-breaking revenues, Apple will forecast its traditionally conservative figures for the second quarter and the stock price will drop. Don’t hold your breath for a special dividend for investors either.

Is a pattern emerging? iPhone 3G in 2008, iPhone 3GS in 2009, iPhone 4 in 2010 and iPhone 4S in 2011. It’s possible to make a reasonably safe guess that the handset nomenclature goes through a major iteration every two years and a minor iteration every year in between.

Standard US mobile contracts are now two years long, which means 2012 will probably be the year of the iPhone 5. Will Apple revert to the summer release date it used for everything except the iPhone 4S or will it revert to an autumn release in September or October?

My guess is that it will opt for early autumn. There are two reasons. One is that a summer release would mean the iPhone 4S will have had less than a year on the market before being replaced. The other is that the summer isn’t an ideal time for a major consumer product release. A few months before Christmas? That’s a different matter.

It seems inconceivable that a new iPad won’t be announced. The iPad 3 is another safe bet, unless it’s called the iPad 2S. One of the reasons for the iPhone’s ‘S’ increment is with the device’s apparent link to the two-year contract with the mobile company. This factor doesn’t apply with the iPad where 3G is an option.

The big question is whether the device will ship with a so-called Retina Display, the super-HD display offered on the iPhone. Improvements to the insides and the cameras will be inevitable but the inclusion of a Retina Display on the next iPad will have competitors struggling to keep up. 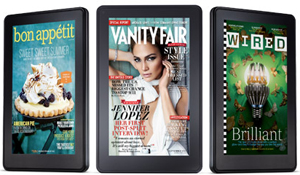 The past two months have been punctuated with reports about Apple releasing a seven-inch iPad to compete with devices of a similar size. I can’t see this release happening for a few reasons.

First, Steve Jobs himself derided the form factor as being inappropriate for tablets. He claimed the seven-inch form factor was “dead on arrival”. Secondly, apart from the Amazon Kindle Fire, seven-inch tablets are hardly setting sales records.

User experience on iOS devices is as much about consistency as it is about delight. Thirdly, much of Apple’s success with iOS comes from the developer community – interfaces need to be redesigned for different screens and the company has long criticised the Android platform for having a fragmented approach.

Amazon and Apple will lead the pack with Amazon competing for the low-end, content-subsidised slice of the tablet market and Apple dominating most of the rest. Apple may continue to sell the iPad 2 at a slightly discounted rate to attract the undecided consumers.

Samsung, Motorola and others may find themselves squeezed from both ends. Meanwhile, the late arrival of Windows 8 later in the year may…

Apple CEO Tim Cook will be under intense scrutiny but even Steve Jobs made mistakes will he was in chargePhoto: Apple

…cause more uncertainty for those trying to gain traction. Some would-be competitors will fall by the wayside. In 2011 it was HP. In 2012 it could well be RIM.

Prediction 6. Apple makes a mistake and the media goes crazy

Apple makes mistakes. It will inevitably make one in 2012 and Tim Cook will be under intense scrutiny. Investors will wail and gnash their teeth. Lest we forget, Cook was effectively operating as Apple CEO for most of 2011 and the company has hardly suffered.

Apple made mistakes while Jobs was in charge and will probably commit some more. Cook strikes me as the kind of guy who goes to sleep with a risk register under his pillow.

The Siri voice assistant application on the iPhone 4S will emerge from beta and proliferate across other Apple devices, starting with the new iPad and later on to the iPhone touch. If it makes it onto a new version of Apple TV that would really make things interesting.

I just can’t imagine it being released on legacy devices, only on new products – if only for reasons of server capacity. Siri may also provide new scope for developers to enhance the Apple experience.

I expect Apple to announce that the service has shed its beta tag at the same time it opens the technology out to developers. Should this announcement happen, the logical time and place is June at the Worldwide Developer Conference.

Opening up the Siri voice assistant app to the vast iOS and Mac developer community could propel it far beyond the reach of competitorsPhoto: Apple

Siri has been a marketing revelation for Apple. Opening it up to the vast iOS and Mac developer community could propel it far beyond the reach of competitors.

Apple may start to move away from Samsung and Google as suppliers as it increasingly competes with them. A master operations guy, Cook will not risk his beloved supply chain efficiencies.

Likewise, Apple has been snapping up companies specialising in mapping technology. It may feel confident enough to ditch Google maps in favour of its own in-house mapping service.

Meanwhile, the patent wars will continue with the same levels of ferocity and tedium. Apple and Samsung lawyers will know each other better than their spouses and partners by the end of 2012.

Jobs managed to set imaginations racing when he stated posthumously in his biography that he had finally cracked the problem of the TV. That may be the case but that doesn’t mean we’re about to see one. This issue is likely to be the big rumour of the year.

It’s not beyond the realms of imagination but it may be too soon for Apple’s tilt at living room domination. The matter of negotiating with the networks is a small matter. Any updates to the existing Apple TV box might offer some clues as to future directions Apple has for the ultimate consumer product market.

Prediction 10. MacBook Pro will evolve into something resembling the MacBook Air

Jobs described the Air as the future of mobile computing. Don’t expect the company to let Apple’s range of powerful notebooks linger in the past. But whether the two ranges will merge is a different matter altogether. The company does like simplified product ranges, especially as the marketing focus shifts from the tech-savvy to the tech-curious.

Jobs described the MacBook Air as the next generation for MacBooks and added that Apple believed all notebooks would be like it one day. Don’t bet against that day falling within the next 12 months.