Are netbooks quietly driving us to thin clients and cloud computing?

Cost is the primary factor driving the rise and spread of netbooks. Businesses are even starting to get on board. However, the proliferation of netbooks will quietly drive us into the arms of thin client infrastructure and cloud computing.

I want to be completely honest about something: I can’t stand netbooks. Netbooks have drawn a surprising amount of attention from corporate users, so TechRepublic has tested virtually every netbook on the market and in the process I’ve kicked the tires on all of them. 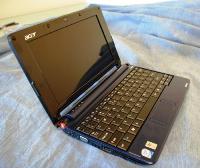 While I have a few favorites – the Acer Aspire (right) and the HP Mini 2140 – all of them are essentially useless for me. When I’m mobile I prefer a smartphone for instant access, and when I sit down I’d prefer to use a full laptop in order to get real work done.

Despite the fact that a netbook is not a viable choice for me and a lot of other power users like me, it’s impossible to ignore the growing influence of the netbook phenomenon – and it still hasn’t peaked. Here are a few metrics that demonstrate the growth and trajectory of netbooks:

Last week Intel CEO Paul Otellini called Netbooks the “only bright spot of growth in the PC industry,” and said, “Not only will [a netbook] appeal to people in emerging markets as first-time machines, it will also offer an alternative to somebody that wouldn’t have bought a higher-end laptop even in mature markets.”

Meanwhile, Gartner analyst Mika Kitagawa said, “It looks like [netbooks] are definitely stronger than regular notebook growth rates and may be eating up traditional notebook shipments.”

As netbooks continue to spread and become a common option for entry-level users, road warriors, and users who primarily need just e-mail and the Web, netbooks are going to inevitably change the computing world. Why? It’s because of their limitations.

Nearly all netbooks suffer from the following drawbacks:

All four of these issues are related to the smaller footprint and the lower power consumption of the netbooks. And these factors are ultimately what make the netbooks so cheap – under $500 and even as low as $300. And since the price tag is the primary factor driving netbook sales, these limitations are not likely to disappear any time soon.

As a result, the limited local processing and limited local storage available on netbooks are likely to become catalysts for transferring more processing and storage to the data center, where companies such as Google, Microsoft, and Amazon are currently building up large reservoirs of computing resources.

Those three companies will certainly be beneficiaries of this trend – especially in terms of their cloud storage initiatives – but so will many other companies that host Software-as-a-Service applications, hosted storage, and cloud computing services.

Enterprises will also exploit this trend to gain efficiency and manageability improvements by being able to centralize more applications, and in some cases even migrating to more of a thin client architecture. Corporate users have often resisted this scenario because it took away some of the flexibility they were used to on their PCs. However with netbooks, this type of centralization would actually help speed up and simplify storage and applications for users on their netbooks, and so it’s much more likely to be accepted.

Delivered Weekdays
Sign up today
Share: Are netbooks quietly driving us to thin clients and cloud computing?
By Jason Hiner
Jason Hiner is Editorial Director of CNET and former Editor in Chief of TechRepublic. He's co-author of the book, Follow the Geeks.