ZDNet's Sam Diaz offers his reaction to two related stories to this matter of Apple and the Google Voice app for the iPhone.

This is a guest post from Sam Diaz of TechRepublic’s sister site ZDNet. You can follow Sam on his ZDNet blog Between the Lines, or subscribe to the RSS feed.

I’m probably just as tired as all of you over this matter of Apple and the Google Voice app for the iPhone. But I would like to share two related posts that I read this morning and chime in with some reaction to both.

The first, which appeared in the MacLife blog, recounted the story of an iPhone app developer team at technology consulting firm Riverturn that is plenty upset that their VoiceCentral Google Voice app was removed from iTunes on June 27 with no warning. The short – and only – answer they’ve received from Apple is that their app, which was previously approved, “duplicates features of the iPhone… and was causing confusion in the user community.” And now, it seems, the company that developed the app is on the hook for refunds for those who bought it.

What’s interesting here is that the backlash from the developer community is starting to mount against Apple – and that can be a dangerous thing, seeing how the real secret sauce behind the iPhone is the third-party apps. (There’s no way the phone service on that device is the big reason for its success.) One of the biggest problems highlighted by the Riverturn developers is that there is no “us” at Apple for the developers to work with about resolving concerns for app development. Apple tells the FCC in response to inquiries from Washington that “we also let (developers) know they can contact the app review team or technical support, or they can write to us for further guidance.”

Hey Apple, the folks at Riverturn sure could use a name and number for the “us” that you referenced there. Oh, and they’d like a few other things, too. They are calling for Apple to create a non-binding pre-approval process – basically, an early thumbs up or thumbs down about the app idea before developers waste their time and money building it and then finding out that it doesn’t meet Apple’s criteria. They also want a complete overhaul of the approval process and inclusion of a formal appeals process.

Yeah, good luck with that.

As for the second item I read this morning, the New York Times had a story this morning with the headline, “A Teenager’s Dream: An iPhone App for Free Texting.”

Just the headline alone tells me that the company approved an app that takes away from a core iPhone feature and that the app goes directly at the heart of one of the revenue streams for the mobile carriers – and not just AT&T. Even the opening paragraph of the story acknowledges that whopping cell phone bills because of teenager texting can be a thing of the past. The NYT writes:

A recently released app that offers free text messages on the iPhone is welcome news to parents of teenagers upset over the cellphone bills of their hypertexting children.

Seriously? That app gets approval – even though it’s disrupting the iPhone experience and it’s blatantly going after one of the core revenue streams for a partner. (If my kids had iPhones, I would buy this app and dump that unlimited messaging plan in a heartbeat.) 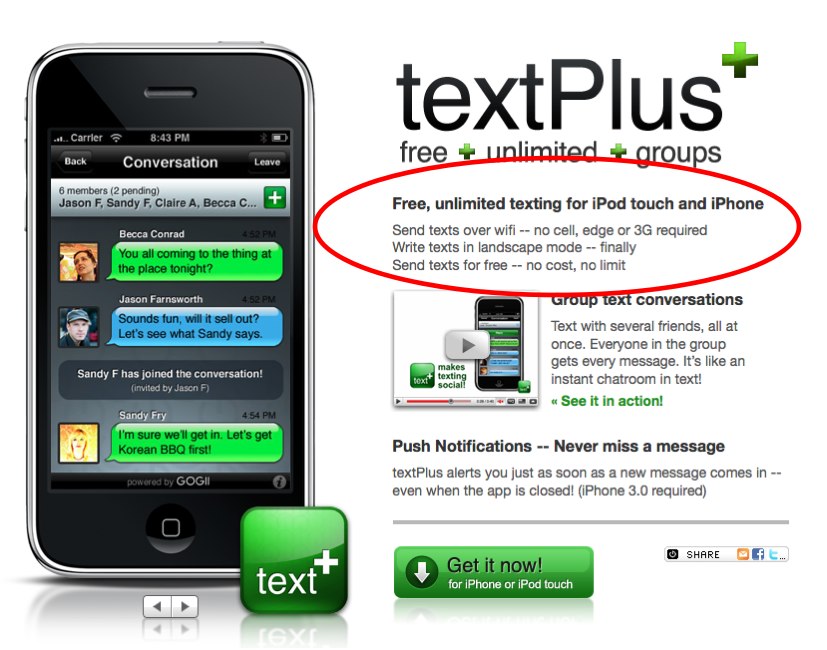 Actually, the app developer, called TextPlus, pays the text messaging bill to AT&T so wireless carrier apparently doesn’t miss out on any revenue. That’s a pretty shaky business model, seeing how the company pays more to AT&T than it receives in advertising revenue, according to the NYT.  But AT&T also misses out on those big money “gotcha” bills, too – the ones where teens text to their hearts delight until Mommy and Daddy get the bill and blow their gaskets.

Bottom line: I have nothing against the folks who created the TextPlus app, but I also think it’s extremely unfair for Apple to approve an app like that and then drag their feet on the Google Voice app, which – I’ll say it again – does not replace the AT&T phone service.