If you have a telescope and a camera, you have the makings of a cool, geeky hobby -- astrophotography. View the gallery for inspiration and learn more about how to get started from three astrophotographers who have shared their work.

I’ve always loved astronomy, and even though I’ve never pursued it scientifically, from a fan’s point of view, I guess you could say, I never get tired of looking at those amazing images captured from NASA’s Hubble and Spitzer telescopes. However, I don’t think I realized what great photographs amateurs can take from their own backyard with equipment that won’t require the budget of a nationally supported space program!

Astrophotography has to be the ultimate geek hobby — combining the allure of deep space, an interest in science, and gear — lots of cool gear — as simple as your means will allow, or as complicated and expensive as you want to make it. I found three astrophotographers who agreed to let me use their images — some experimental, and some very accomplished — and created an astrophotography gallery to give you a taste of what’s possible from your own backyard. Star trails in the night sky, a full solar eclipse, moon shots, and deep space objects are all included.

Even light-polluted cities don’t necessarily count you out; two of the three photographers are located in very populous areas: Geert Vanhauwaert lives in Santiago, Chile and Narayan Mukkavilli lives in Sydney, Australia. The third is Oklahoman Thomas Shahan. Of course, most astrophotographers are also willing to travel routinely to capture just the right shots from dark spaces and local observatories.

When I asked about advice for beginning astrophotographers, Shahan said, “Read, read, and read some more. Astrophotography can get pretty complicated, but at its core, it’s a fairly simple process – enjoy yourself and don’t worry about trying to get spectacular photos right away – it takes time.” 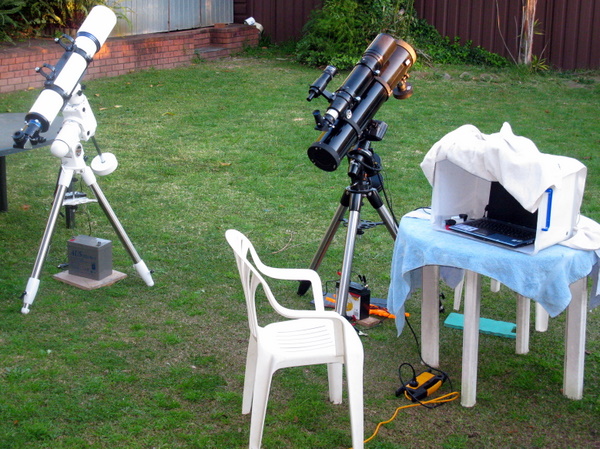 Sydney-based Mukkavilli said that he started astro-imaging in 2004 with an ETX 70 telescope that cost under $200, and a modified webcam (you can see some of his earliest attempts here). As he continued to learn and gain experience, he added and upgraded his set-up: “I then purchased a dedicated Astro Imaging camera — an Orion Deep Space Imager I, and the results were a considerable improvement, even with my little $200 telescope.

“Encouraged, I followed the natural progression of most amateur astroimagers by purchasing a Canon DSLR — the famous 300D — and a much better mount, though still modest compared to most serious astroimagers. This was a Celestron CG-5 AS — an equitorial mount with full GoTo. I also gave away my ETX and purchased an ED80, an 80 mm apochromatic refractor. This superior kit enabled me to started taking long exposures by autoguiding the mount — using “Guidemaster” initially and then “PHD guiding” — both freeware. I use the brilliant “Deep Sky Stacker” software, also freeware, to combine a large number of sub frames — each sub frame ranging from 5 to 10 minutes usually.

“I now also possess a Skywatcher EQ6 mount and an ED127, a 5-inch apochromat, which I purchased directly from a Chinese company, and have moved on to a dedicated cooled Astroimaging CCD camera, a QHY8.

“Because much of my imaging is done at home, where the sky is light polluted I do a fair bit of work in narrowband, using a 7 nm H alpha Filter. Occasionally I will travel to a dark site around new moon to collect colour data. 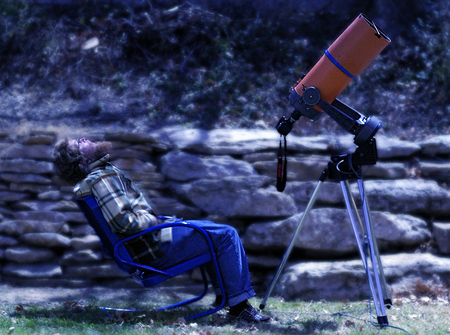 View the gallery, Astrophotography: The ultimate geek hobby, to see images from each of these photographers. If you’re interested in getting started yourself, you might want to check out this site, which has a ton of resources for beginners, as well as more advanced practitioners. [Update: Thomas Shahan said these forums were very helpful to him, if you’re interested in taking your own photos: http://www.cloudynights.com/ubbthreads/postlist.php/Cat/0/Board/DSLR.]

If you are already dabbling in astrophotography, let us know in the discussion.

Delivered Weekdays
Sign up today
Share: Astrophotography: The ultimate geek hobby
By Selena Frye
Selena Frye is a former Senior Editor for TechRepublic. Her background is in technical writing, editing, and research. I edit the Data Center, Linux and Open Source, Apple in the Enterprise, and IT Security blogs.