Despite a clampdown after the dot-com bust, some employees now have more options about when and where they work.

Brad Short comes up with key design ideas for Hewlett-Packard printers from a lounge chair in his backyard.

And if he’s feeling uninspired, he doesn’t hesitate to stop working for a spell. He’ll return to his duties later. “Not everyone can be innovative in a very structured, 9-to-5 type office environment,” said Short, a lead mechanical-design engineer in HP’s printer group. At home, “you stop watching the clock,” Short explained. “It now becomes more of a focus on getting the task done.”

Short isn’t alone in having an unconventional work arrangement. In the wake of the dot-com crash, some technology companies clamped down on telecommuting options. But thanks to better technology, employee desires and a focus on results, a number of firms in the industry are giving more workers flexibility in the way they do their jobs.

Telecommuting, flextime and the like are good for both employers and workers when set up properly, said Ellen Galinsky, president of the Families and Work Institute. These sorts of arrangements are maturing from a mere carrot used to hire workers to a fundamental way of doing business in a global, demanding economy, she said. “Providing flexibility isn’t a perk,” Galinsky said. “Flexible work (options) are part of effective companies.”

Practices such as telecommuting and working flexible hours have been around for decades. But they became more pronounced in the late 1990s, as the Internet and e-mail made remote work more feasible. In addition, technology companies eager to snap up talent during the dot-com rush gave employees a lot of latitude when it came to work. Remember stories of people bringing pets to work?

But after the Internet bubble burst, some companies reviewed their workplace rules as the business world refocused on financial results. Some technology companies decided to restrict their telecommuting policies earlier this decade, said Jack Nilles, president of JALA International, a consulting firm focused on telecommuting. “Strangely, tech companies sometimes are more conservative in this respect,” he said.

Such companies are missing out, Nilles argues. Telecommuting increases workers’ average productivity by 5 percent to 20 percent, he said. “Most offices are dysfunctional,” Nilles said. “Interruptions are unbelievable.”

Galinsky said some businesses had poorly designed “loosey-goosey” workplace policies in the late 1990s. Her institute has found that creating flexible guidelines that make sense for both employer and employee works best. Done well, it pays off for both sides: Research from the institute has found that employees with flexibility are more engaged in their jobs and committed to helping their companies succeed, more likely to plan on staying with their employer and more satisfied with their jobs.

One reason flexible workplaces are becoming more common: Businesses are focusing more on whether and how well work gets done, not just when and where it gets done, Galinsky said. In addition, employees are calling for new work arrangements as they spend more time overall on the job.

Given these factors, companies are becoming more flexible. For example, the number of people who work away from the office at least one day every couple of weeks is just less than 30 million this year, up about 10 percent from last year, Nilles estimated.

Companies in the technology arena are among those providing flexible workplaces. Diane Berry, a vice president at technology researcher Gartner, allows one of her subordinates to work unusual hours. “She may come in at 10, leave at 4, and then work from 7 to midnight at home,” Berry said. 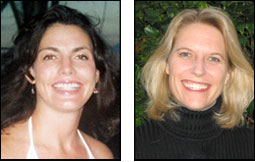 Katy Mann (left) joined Network Appliance as a
unit with Pamela Sotnick (right). Together, the
job-sharing duo last year ranked first in sales
in the Americas.

The two women began sharing a job at Cisco Systems in 2000 and came to NetApp as a unit about two and a half years ago. NetApp had never hired a job-sharing sales team before Mann and Sotnick, but the duo has erased any doubts: They ranked first in sales in the Americas last year and sold more than $24 million in NetApp gear last quarter.

Both women wanted reduced hours on the job so they could spend more time raising their young children. And they find that their odd setup–which includes a single phone number, a single e-mail address and a dual-sided business card–gives them a head start in landing deals.

Their potential customers in the federal-government sector are intrigued, Sotnick said. “It gets the personal relationship going right away.”

Bending the rules
IBM has a variety of flexible work programs, including flextime, telecommuting and compressed workweeks. And the share of Big Blue employees working in nontraditional settings is growing. In 2001, about a third of IBMers worked outside the office at least some of the time. That figure has climbed to 42 percent, said Maria Ferris, manager of work/life and women’s initiatives at IBM.

Ferris is a case in point. Her official workplace is her home in Raleigh, N.C. From there, she manages a team of workers scattered across the United States and collaborates with counterparts in other countries. “The global reach of our jobs has had an impact on how we work,” she said. 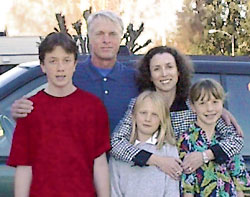 Flexible work arrangements have helped
Kristy Ward, a marketing manager at
Hewlett-Packard, spend more time with her
husband and three children. “I think I’m
more productive, because I’m so aware I’m
not (in the office) all the time,” she said.

HP says an increasing number of its employees are taking advantage of flexible work programs. But HP marketing manager Kristy Ward is a veteran when it comes to unconventional arrangements. Ward began sharing a marketing job with another HP employee in 1990, and for 10 years she worked Wednesday through Friday while her job-sharing partner worked Monday through Wednesday. Later, she shared her job with another partner for eight months. Ward now works a part-time schedule of about 30 hours a week on partner marketing relationships.

A desire to spend more time with her three kids–now 11, 12 and 14–spurred Ward to seek these arrangements. But she said her family focus has not distracted her from work responsibilities. “I think I’m more productive, because I’m so aware I’m not here all the time,” she said. “I tend to be more heads down.”

The way telecommuting lends itself to concentration is crucial for HP’s Short. About eight years ago, he covered the entrance to his office cubicle with cardboard to help him focus on a project. That seemed to some colleagues to rub against HP’s “open door” culture, and it helped convince Short to push for a work-at-home arrangement. “It kind of evolved out of desperation to meet some of the deadlines and not be distracted,” he said.

Short is now as likely to work at home as he is at his designated HP office in San Diego. Technology has made this arrangement easier over time: The design software he uses once required a bulky workstation computer, but it can now fit on his laptop.

Flexible-workplace hurdles
Still, he sees room for improvement when it comes to virtual-workplace tools. For example, Short communicates with HP workers in Singapore but says videoconferencing isn’t yet ideal. Low-resolution video with slow frame rates–apparently due to limited Internet bandwidth–has made videoconferences difficult to use effectively for tasks that require attention to detail, he said. “We have tried to use (videoconferencing technology) now and then, but it is still plagued by some glitches.” 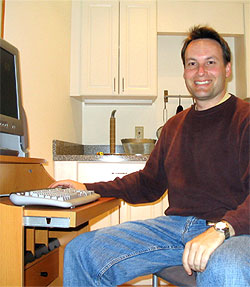 Brad Short once covered the entrance to
his office cubicle with cardboard to focus
on a design project. He’s now as likely to
work at home as he is at his designated
Hewlett-Packard office in San Diego.

Other challenges stand in the way of flexible working arrangements. They include ensuring that company data isn’t at risk when employees work from home, convincing managers to supervise based on results rather than seat time and making remote employees feel connected. People working in their homes can get alienated, IBM’s Ferris said. “Employees want to feel a part of the team,” she said.

Successful job-sharing requires a good deal of trust and much communication, Ward said. She and a partner supervised other HP employees, who occasionally tried to play one manager against the other. “You get tested sometimes,” Ward explained. “If we had given conflicting responses to an employee, that would have been terrible.”

Nilles suggests that companies create ways to quantify the performance of telecommuting workers. Fewer than 5 percent of telecommuters “fit their manager’s worst fear–they do go to the beach or play golf,” he said. There is probably a higher percentage of office loafers, who have learned to look busy, Nilles said.

Gartner’s Berry recommends that companies offer flexible work rules as a way to hold on to employees during what she sees as a coming shortage of technology talent.

It’s debatable whether a labor crunch is on the horizon. But there’s general agreement that flexibility–when done right–works.

Ward, for one, says she’s become more loyal to HP because of its willingness to accommodate her parenting goals. And she suggests that companies can win the hearts of people beyond their direct employees with workplace flexibility. “When my kids were little, it was great to be home those two days a week,” she said. “My kids love HP for giving me that opportunity.”