The Windows 8 Task Manager Performance tab has many new features and provides users with more detailed information than ever. 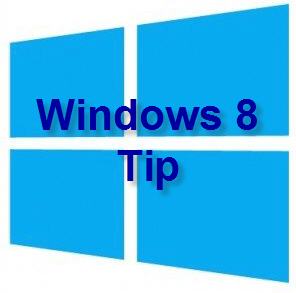 Back in October 2011, I wrote an article titled “Explore the Advanced Features of the New Windows 8 Task Manager,” in which I provided you with an overview of all the Task Manager features in the Windows 8 Developers Preview. Well, now here we are eight months later and working with the Release Preview edition of Windows 8, and at this point in time Task Manager should be feature complete. Therefore, I have decided to spend some time taking a detailed look at the information and features on the various tabs.

Now you might think that I would want to start with the Processes tab because of all the impressive new features found there, but I’m not. Instead, I’m going to start with the Performance tab because I’ve discovered that by dividing the tab into separate sections for CPU, Memory, Disks, and Ethernet, as shown in Figure A, Microsoft has really packed a lot of information into this tab and I don’t want that fact to be overlooked. (I’ve combined the graphs into a composite image, so that at a glance you can see that each section on the tab is packed with information.)

In this edition of the Windows Desktop Report, I’ll delve into Task Manager’s Performance tab and take a close look at all the new features and detailed information displayed on each section of the Performance tab. 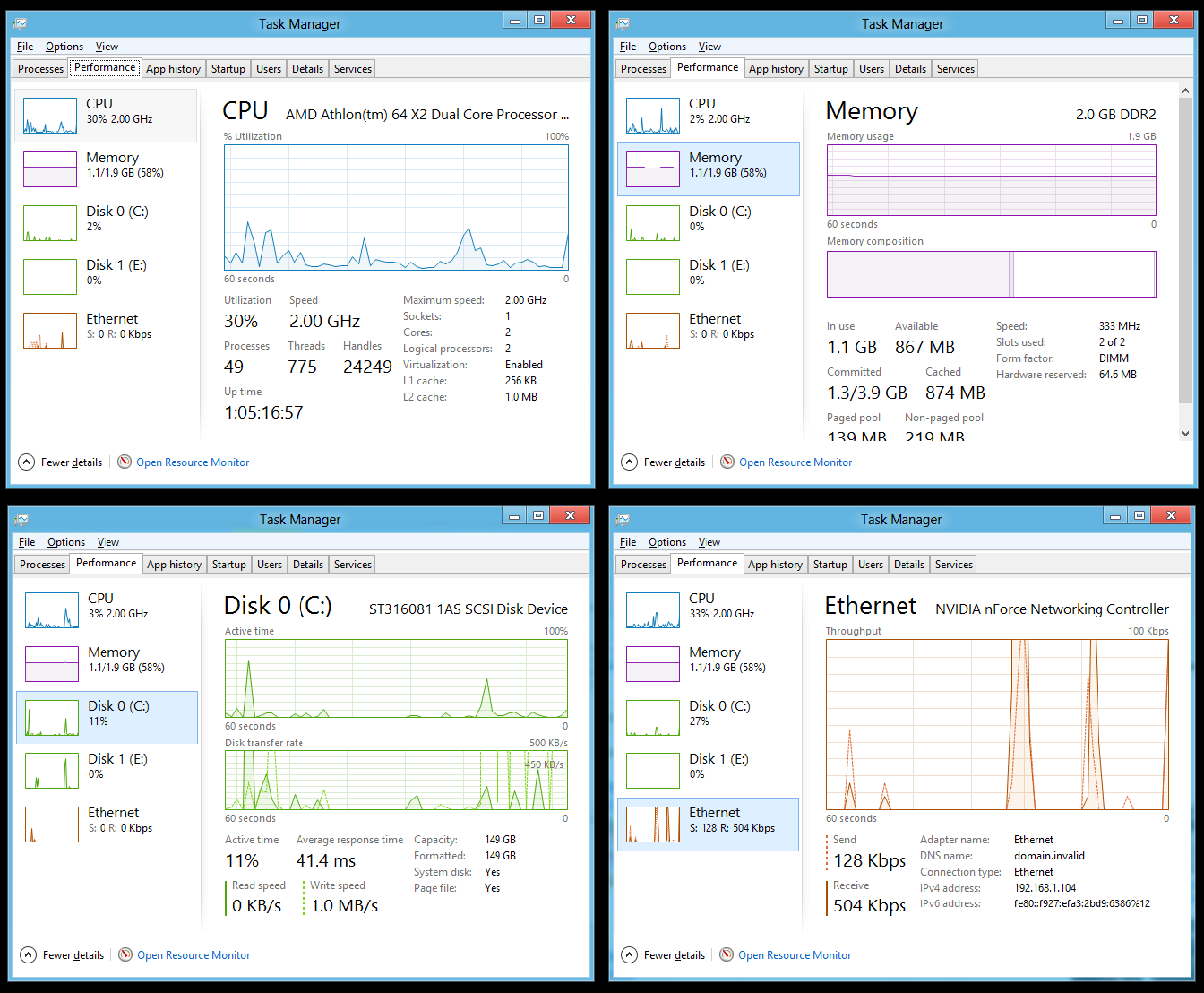 The Performance tab shows data and graphs of the CPU, Memory, Disks, and Ethernet.

Before I get started, there is one outward change that I noticed right away and that is that the title bar for this tool used to read Windows Task Manager and now the title bar just reads Task Manager. Not sure how significant that change is or even if it is permanent, but, nonetheless, there it is.

Editor’s note: To refresh your memory, in Windows 8 you can get to the Task Manager by pressing CTRL-ALT-DEL, selecting Task Manager, and clicking the More Details button.

On the CPU section of the Performance tab, the actual CPU is now specifically identified in detail with the brand, the model number, the speed, as well as the number of sockets, cores, and logical processors being prominently displayed, as shown in Figure B. You can tell at a glance whether processor’s hardware Virtualization technology is enabled. (An operation that not too long ago was difficult to perform and raised all sorts of confusion when it was required to run Windows XP Mode in Windows 7.) You can even find information about the CPU caches. 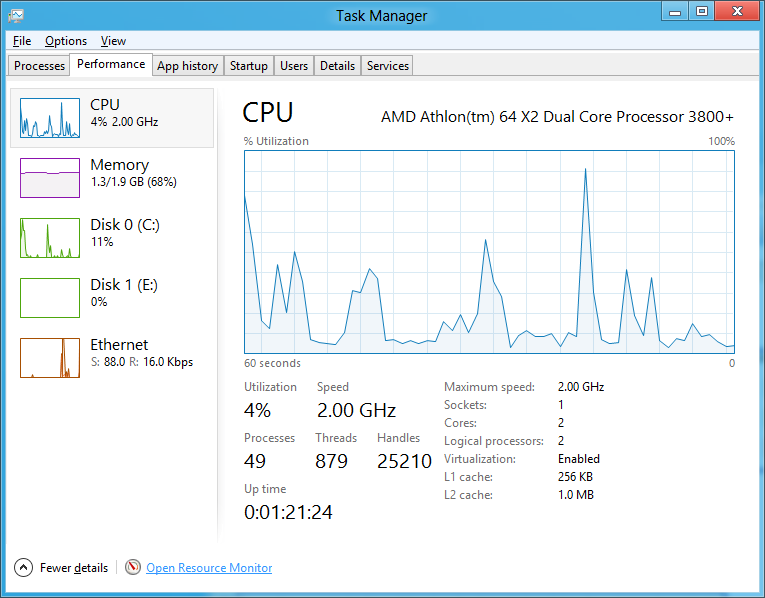 The CPU section of the Performance tab now identifies the CPU in detail.

The graph displays the percentage of your CPU’s utilization on a scale of 0 to 100 over a 60-second time frame. The Utilization number below the graph shows the percentage at any one point in time. On the next line down, you can find some of the information from the older Task Manager: Processes, Threads, and Handles and below that you’ll find the Up Time. 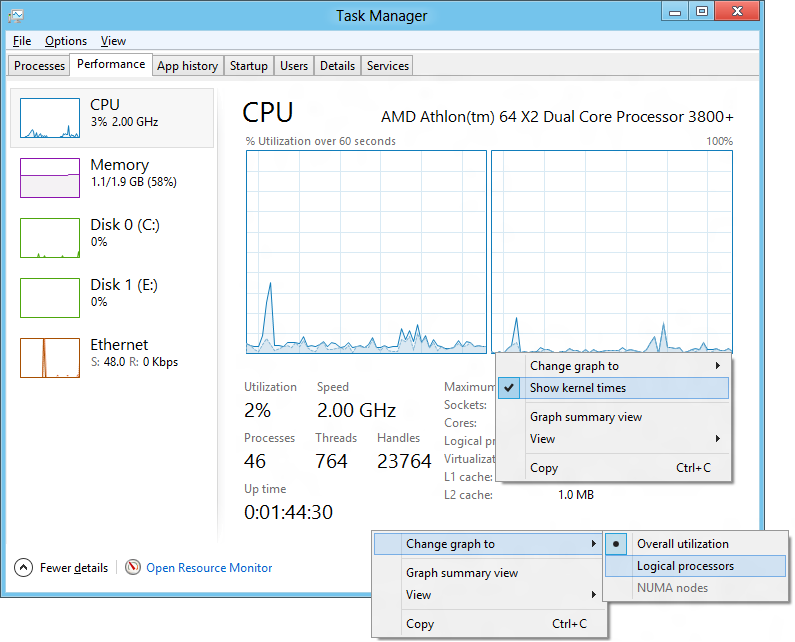 You can reconfigure the graph to display all logical processors and to show kernel times.

On the Memory section of the Performance tab, the total amount of memory is prominently displayed along with the memory type, as shown in Figure D. You can also see the chip speed, the number of memory slots being used, and the form factor.

How many times have you sat down at an unfamiliar PC and wanted to know that level of detail about the memory in the system? Well, now it’s right here in Task Manager. You can even see the amount of memory that is reserved for hardware. 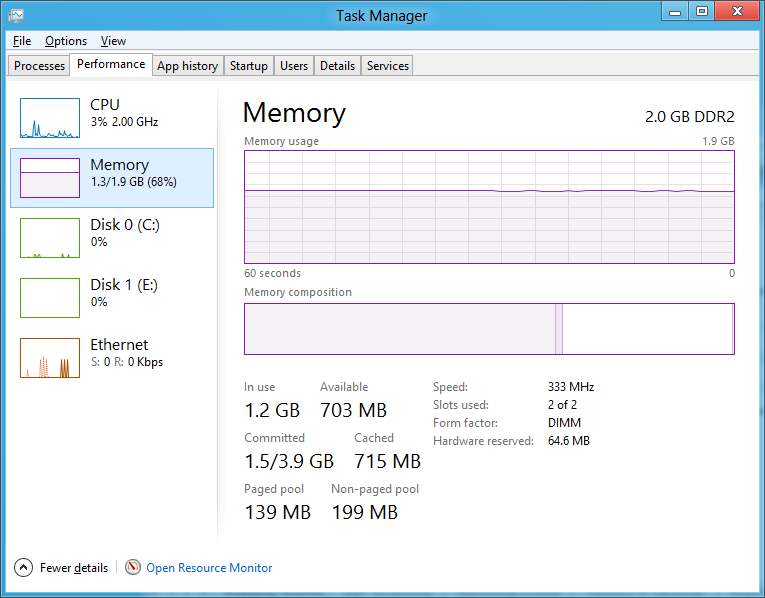 The Memory section of the Performance tab provides you with detailed information about memory usage.

As you can see, there are two graphs in the Memory section. The first graph shows memory usage on a scale of 0 to the total amount of memory over a 60-second time frame. The second graph, titled Memory Composition, shows the memory used by processes, drivers, or the operating system.

The Cached value indicates the amount of physical memory used recently for system resources. (This memory will remain in the cache in case the system resources are needed again, but it’s available should other operations need it.)

On the Disk section of the Performance tab, the model number of the drive and the type of drive are prominently displayed at the top of the section, as shown in Figure E. (No need to go to Device Manager to find that information any more). You can also see the disk capacity, how much of it is formatted, whether it is the system disk, and whether it contains a page file. 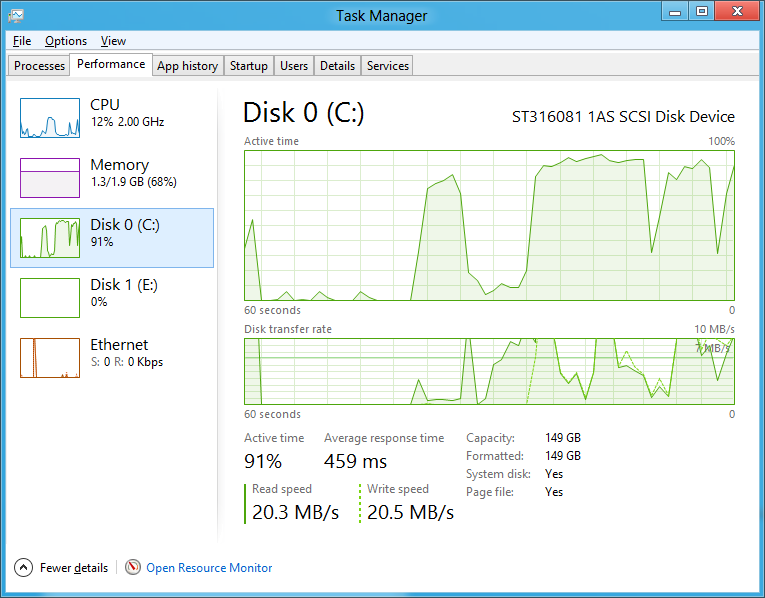 The Disk section of the Performance tab contains two graphs.

As you can see, there are two graphs in the Disk section. The first graph is titled Active Time and shows the percentage of your disk’s utilization (the percentage of time the disk is processing read or write requests) on a scale of 0 to 100 over a 60-second time frame. The second graph is titled Disk Transfer Rate and shows you the transfer rates between the hard disk and the system over a 60-second time frame.

Below the graph you’ll find the Active Time value, which indicates the percentage of use at any one point in time. The Average Response Time value indicates the amount of time it takes the drive to actually transfer data to the system. Of course the Read and Write Speed values indicate how fast the disk is performing I/O operations.

On the Ethernet section of the Performance tab, the name of the network card is prominently displayed at the top of the section, as shown in Figure F. You’ll also see the adapter name, the DNS name, and both the IPv4 and IPv6 IP addresses. 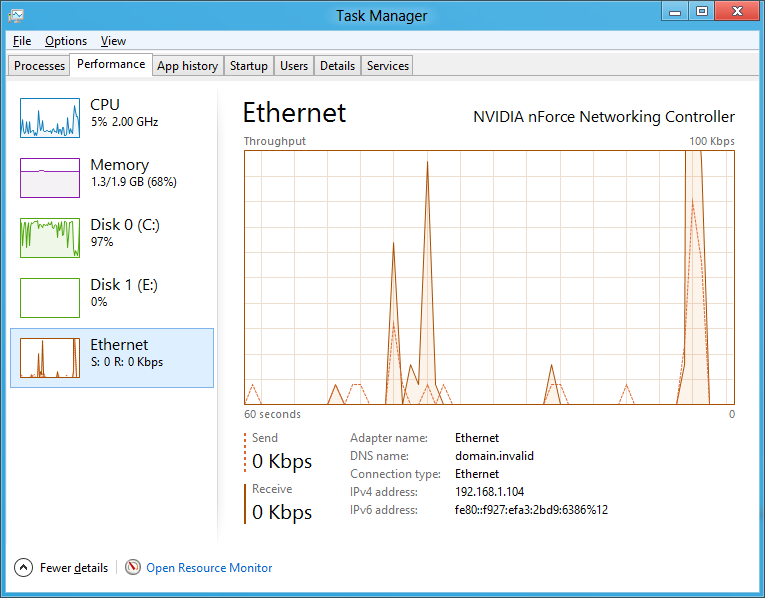 On the Ethernet section of the Performance tab, the name of the network card is prominently displayed at the top of the section.

The graphs show overall send and receive activity on a scale of 0 to 100 Kbps over a 60-second time frame while the Send and Receive values below the graph show the type of activity at any one point in time. If you right-click anywhere on the Ethernet section and select View Network Details, you’ll see a second window full of detailed information, as shown in Figure G. 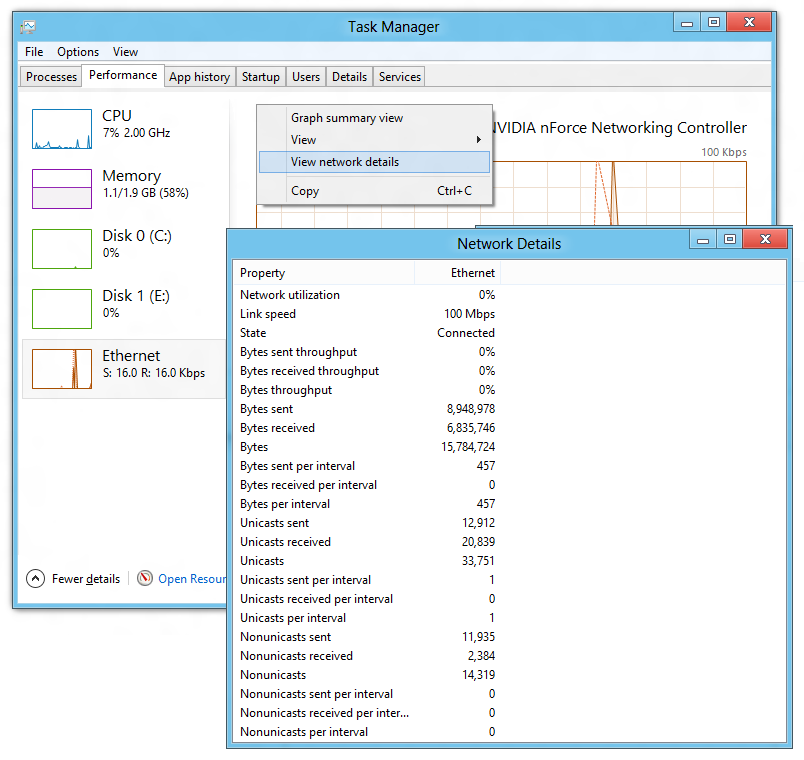 There are a number of ways that you can change the display of Task Manager’s window. If you right-click in the left side of the window, you’ll see the Summary View and the Hide Graphs commands. Selecting Summary View removes all the details and leaves the graph thumbnails and selecting Hide Graphs replaces the graphs with bullet points, as illustrated in Figure H. 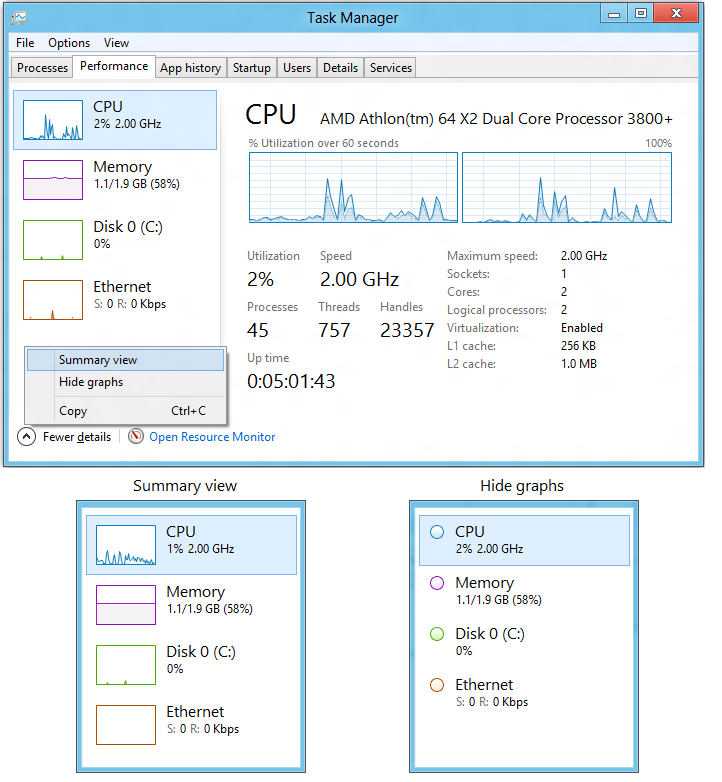 Using Summary View and Hide Graphs, you can change the display of Task Manager’s window. 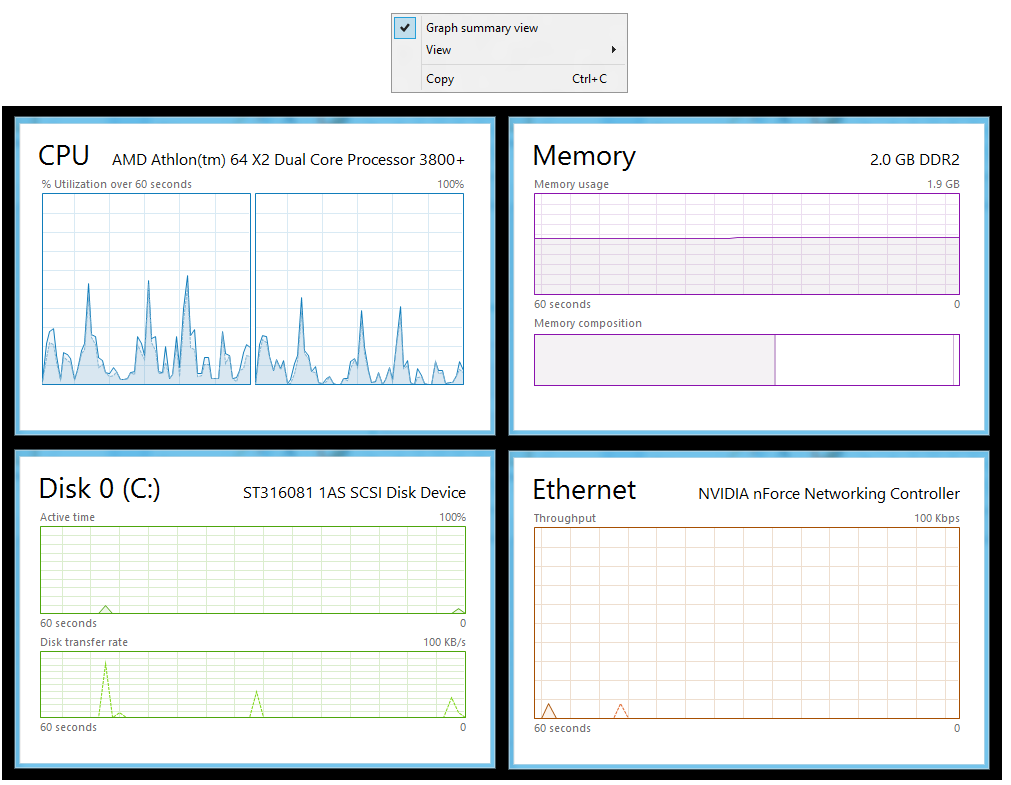 This composite image shows each of the graphs in the Graph Summary View.

You’ll also see two other commands on the menu: View and Copy. When you select View, you’ll see a submenu that allows you to switch between the CPU, Memory, Disks, and Ethernet sections. If you select the Copy command, any of the text-based details on the screen will be copied to the clipboard where you can easily paste them into Notepad or an email message.

Do you think that there is enough detail information on the Performance tab in Task Manager to warrant your consideration? As always, if you have comments or information to share about this topic, please take a moment to drop by the TechRepublic Community Forums and let us hear from you.

Delivered Weekdays
Sign up today
Share: Better troubleshooting with the Windows 8 Task Manager Performance tab
By greg shultz
My first computer was a Kaypro 16 \"luggable\" running MS-DOS 2.11 which I obtained while studying computer science in 1986. After two years, I discovered that I had a knack for writing documentation and shifted my focus over to technical writing.