Yesterday, in his keynote to kick off the Windows Hardware Engineering Conference (WinHEC) in Los Angeles, Microsoft Chairman Bill Gates provided a slew of new details about Windows Home Server, including key announcements about hardware and software partners, and he stated that the product will be released this fall. “With Windows Home Server, we’re launching ...

Yesterday, in his keynote to kick off the Windows Hardware Engineering Conference (WinHEC) in Los Angeles, Microsoft Chairman Bill Gates provided a slew of new details about Windows Home Server, including key announcements about hardware and software partners, and he stated that the product will be released this fall.

“With Windows Home Server, we’re launching a new category of consumer products that will make it much easier for people to connect to their digital content and share experiences with friends and family no matter where they are,” said Gates.

“We’ve got a lot of new partners who are helping us with this… It’s important to note that this is a platform. Because you’ve got Windows capability, we’re already seeing these partners and software companies build on to the functionality that’s there in the Home Server. What we’ve done is make sure that the built-in functionality is strong enough that a multi-PC household is going to find this the simplest and the best way to manage their information.” 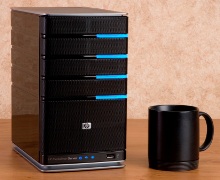 Microsoft is also encouraging developers to get involved as partners by announcing the “Windows Home Server Code2Fame Challenge,” which will award prizes of $10,000, $5,000 and $1,000 to the first, second, and third place winners, respectively, in both the hardware and software categories. Microsoft recently released the Software Development Kit for WHS in order to give developers the tools to build add-ons to the product.

The most significant product feature that was revealed (and it might have already been in the WHS Beta, but I just didn’t notice) was that WHS can be used to monitor and manage all of the PCs on its network. For example, it can provide an alert when firewall or antivirus software is turned off on any of the PCs on the network, and it can provide the ability to turn it back on from the server.

Microsoft also provided a topology diagram for a home network powered by a Windows Home Server (and, of course, running a host of other Microsoft technologies):

Yesterday’s announcements shouldn’t do anything to dampen their enthusiasm, since Microsoft partners are clearly building an ecosystem of solutions to support and extend Windows Home Server.

However, there is still one important issue hanging out there: will Microsoft sell the software separately so that IT pros and power users can install it on their own hardware? In my poll, 49% of respondents said that they would prefer to buy WHS as software and install it themselves. Now, this won’t likely be the preference for the larger body of WHS users, but for TechRepublic’s highly-technical audience, this is a key consideration.

Gates stated yesterday, “We’ll also have a version of this Home Server SKU available to system builders, so people who put together custom systems even in quite limited volume, this software capability is something that they’ll be able to load onto it.”

That’s not quite the same as releasing a boxed version of the software, but it probably means that IT pros and power users will be able to buy an OEM copy of Windows Home Server from Newegg.com and similar vendors, as I suggested last week. I have requested Microsoft to comment further on this issue, and I’m waiting to hear back from them this morning. I will post an update when I get a response.

Do these new developments make you more interested in Windows Home Server? How important will it be for you to be able to buy it as software? What kind of price point are you hoping for? Join the discussion.

I spoke to Joel Sider, senior product manager of Windows Home Server, and asked him about the target demographic for the product and whether Microsoft would release the product as software.

“Our primary focus is providing an easy solution to consumers,” said Joel. “This product is aimed at households that have more than one PC, and a broadband connection.”

According to Microsoft’s research, that translates into 15 million households in the U.S. and about 50 million worldwide.

“We’re not going to be providing [Windows Home Server] as boxed software,” Joel stated. “Our focus is on this mainstream audience that we want to provide with a hardware/software solution. We think that’s the best way to ensure a quality user experience.”

I mentioned to Joel that last week’s TechRepublic poll showed 49% of respondents wanted to install Windows Home Server on their own hardware and that if it wasn’t available as retail software then people would likely purchase OEM copies from NewEgg, as they’ve done with Windows XP Media Center in the past. “We’re aware of that,” he said. “It does happen.” But he reiterated that Microsoft is focused on Windows Home Server as an appliance in order to serve the broader audience.

So we’ve finally got the official word. There will be no retail edition of the Windows Home Server OS. That’s not really a surprise — the tea leaves had been reading that way for a while — but it is still disappointing, at least for techies.