After I swapped out the SIM card from my BlackBerry Bold, I tested the BlackBerry Storm2 9550 by using it as my work phone. Here’s a snapshot of the device’s specifications and enhancements. 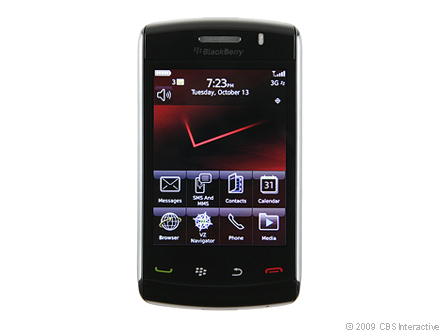 Here’s a look at some of the enhancements in the BlackBerry Storm2 9550.

Default buttons on the display

At first glance, the integration of the default buttons (Call, End Call, Menu, Back) on the main display makes for a more refined feel and reduces how much dust and lint gets trapped.

Memory
It appears that RIM positioned the BlackBerry Storm2 9550 as a high-end device, packing it with 256 MB of flash memory. Memory running low is definitely not a concern here; even after installing my favorite applications, the free memory stayed resolutely in the 30-40 Megabytes space.
Touch screen keyboard
In response to criticism that the original SureType screen was too hard to type on, RIM has tweaked the BlackBerry Storm2 9550 so that its clickable “haptic” screen is easier to click on. I was able to type much faster thanks to the improved tactile response; I particularly liked typing using the QWERTY keyboard in landscape position.

The BlackBerry Storm2 9550 keyboard also has an option called Popup Keys. As the name suggests, this feature will display a popup window showing the key that you pressed.

I hesitate to say that the device’s touch interface is better than that of the iPhone, but it’s evident that great strides have been made in the cohesiveness of the touch screen’s UI elements. Unless you intend to regularly craft full-length correspondence while on the go, I think you’ll definitely enjoy the experience and larger display afforded by the touch display.

High-resolution touch screen
With the BlackBerry Storm2 9550, I can simply tap on various elements on the default Home screen rather than wasting the space on application icons. I was able to manage the wireless connectivity, set the alarm, and switch profiles simply by tapping on the indicator icons — these are standard items on every BlackBerry. Tweaks to optional social networking applications that came bundled with the BlackBerry Storm2 9550 (which include Facebook and UberTwitter) were also touch screen friendly.

I enjoyed the extra screen real estate for reading text messages and emails; oftentimes, I was able to read these messages without needing to scroll down. In fact, with the beta release of the Kindle app for BlackBerry software, I actually missed the large touch screen when I switched back to my BlackBerry Bold, which has a smaller display.

Get smartphones tips and news in your inbox
TechRepublic’s Smartphones newsletter, delivered each Thursday, features tips on how to deploy and manage smartphones in your enterprise, product reviews, news updates, photo galleries, and more. Automatically sign up today!

Delivered Weekdays
Sign up today
Share: BlackBerry Storm2 9550 features numerous enhancements
By Paul Mah
Paul Mah is a writer and blogger who lives in Singapore, where he has worked for a number of years in various capacities within the IT industry. Paul enjoys tinkering with tech gadgets, smartphones, and networking devices.