A new feature in Windows 8 will produce a detailed report on your system's battery usage.

If you are using Windows 8 on a laptop or Windows RT on a tablet, you’ll be interested to know that Windows 8 has a new feature that allows the operating system to produce a detailed report on the system’s battery usage. This new feature can come in handy as a troubleshooting tool when you are encountering problems with your battery maintaining a charge or as a general information tool if you just want to keep tabs on your battery usage. The Battery Report is generated by Windows 8’s Power Configuration Utility, which you run from the command line with a special switch.

In this edition of the Windows Desktop Report, I’ll take a look at Windows 8’s Battery Report.

Launching the Power Configuration Utility and running the Battery Report is easy, once you know how. To begin, use the [Windows] + Q keystroke to access the Search Apps page. Then, type cmd in the text box and click Command Prompt, as shown in Figure A.

Accessing the Command Prompt from the Start screen is easy

When you do, the Power Configuration Utility immediately compiles the report and displays a message to that effect, as shown in Figure B. 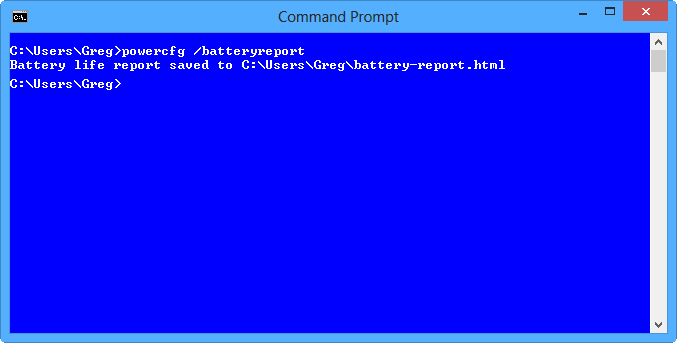 It only takes a moment for the Power Configuration Utility to compile the Battery Report.

Now, launch File Explorer, navigate to the specified folder, locate the battery-report.html file, and double click it. When the Battery Report page loads in your browser, you’ll have to scroll down to see the entire report. As you’ll see, the report contains six sections plus the header. To make it easier to look at the report in this article, I have divided my screen shot of the report down into seven images corresponding to each of the sections. Let’s take a closer look.

At the top of the report, as shown in Figure C, is some general information about the computer that includes the name assigned to the system, the brand and model of the device, the BIOS version and date, and the operating system build number. It will then list an item called Platform Role, which as you can see is identified as Mobile for this laptop. The next item in this section is called Connected Standby and you can see that for this particular laptop it is listed as Not Supported. This is followed by the date and time that the report was run.

At the top of the report you’ll find some general information about the computer.

When you run the Battery Report on a Surface RT or similar device, you’ll see that the Platform Role is listed as a Slate. You’ll also see that Connected Standby is listed as Supported.

One of the big benefits ARM-based devices is that they can last days or weeks on a single battery charge. When Microsoft was creating Windows RT they wanted it to have the best possible battery usage for a WOA (Windows On ARM) and developed a new power mode technology called Connected Standby.

Essentially, Connected Standby allows a Windows RT device to conserve battery power by entering a very low power mode when the device is not in use, but remain connected to the network. The goal is to allow the system to conserve battery power while still allowing a Live Tile on the Start Screen to maintain connectivity to its source. For example, a news or weather app can maintain its connection such that when you wake up a Windows RT device, the information displayed in the Live Tile will be as current as if the system was always on.

In the Installed batteries section, shown in Figure D, you’ll find detailed information about the battery including the name, serial number, and manufacturer. While the particular battery shown in this screen shot doesn’t list the name or serial number, many actually do.

In the Installed batteries section, you’ll find detailed information about the battery.

The Chemistry is listed as LION which indicates that this is a Lithium Ion battery. As you can see, the next item in this section is Design Capacity and represents the amount of a charge that the battery was designed to hold. The value is represented as mWh, which stands for milliwatt hours. (Laptop batteries have a voltage rating (V) and milli-Amp hours (mAH) rating and these two ratings are multiplied together to come up with the milliwatt hours capacity.)

The last item in this section is called Cycle count and this value indicates the number of times that the battery has used up 100% of its charge. For example, a cycle could be measured each time that the battery has run all the way down and then been recharged. A cycle could also be the result of discharging to 50%, charging to full, then discharging to 50% again. Batteries have a limited amount of cycles to work through before they are considered consumed. Maximum cycle count varies depending on a number of factors, but the battery manufacturer will have a maximum count value listed in the battery’s specifications.

In the Recent usage section, shown in Figure E, you’ll find a table that lists the power states – Active or Suspended – which the system has gone through over the last 72 hours. As you can see, the table indicates the time that the system started, whether the power source was the battery or AC, as well as the remaining capacity of the battery at the time the entry was made. As you can see, the remaining capacity is shown as a percent as well as the mWh. 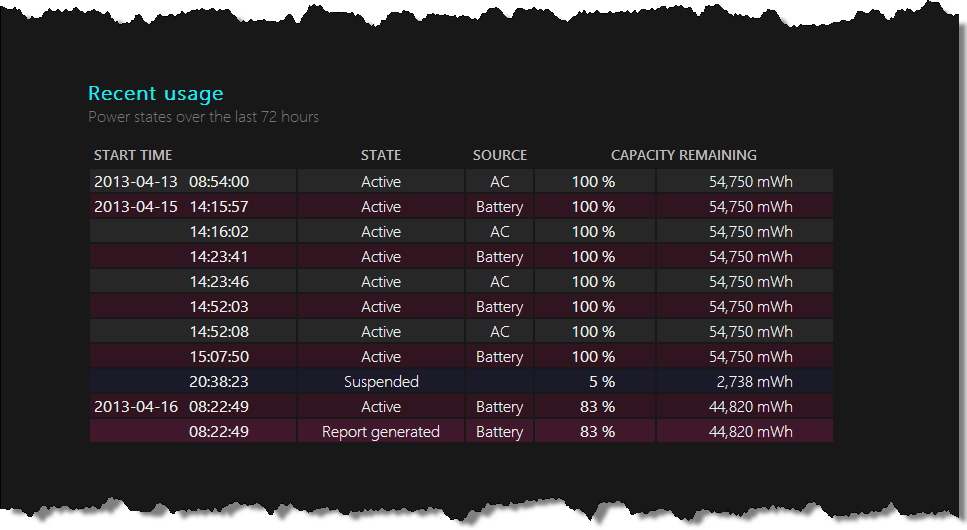 The Recent usage section, you’ll find a table that lists the various power states from the last 72 hours of use.

The Battery usage section features a chart as well as a table that will indicate the date and time for each instance when the battery was drained over the last 72 hours. As you can see in Figure F, after five and half hours of use on April 15, the battery on this laptop was drained 95% and that equated to 52,012 mWh being used. 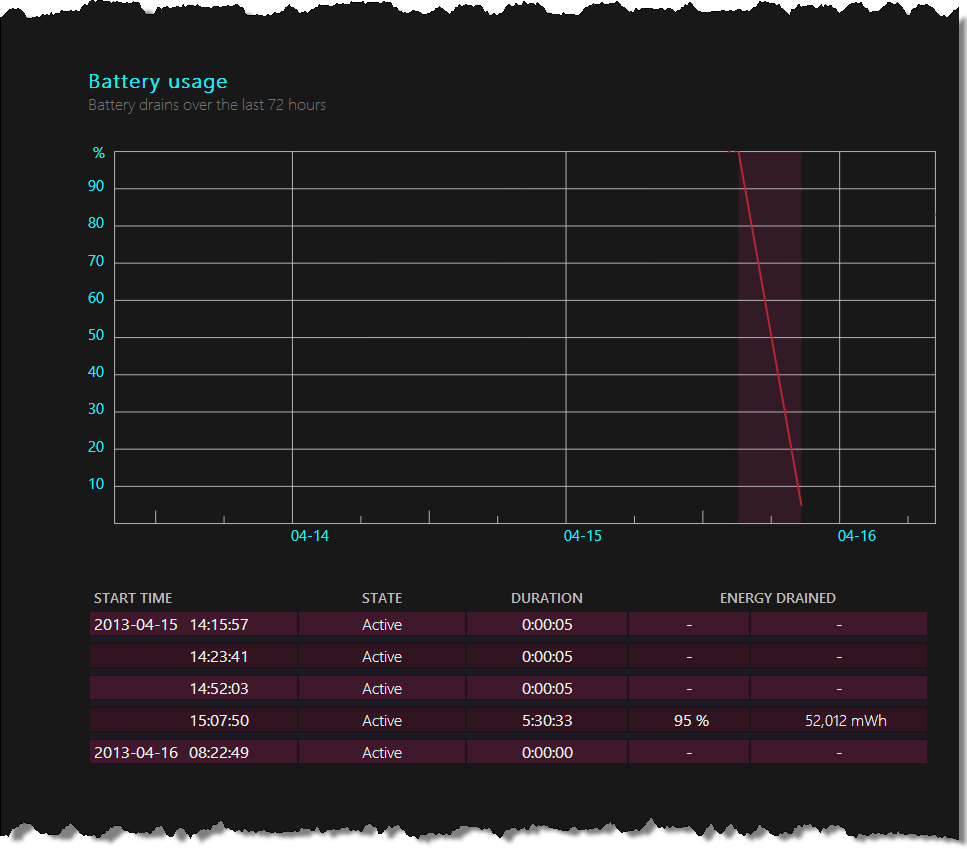 In the Usage history section, shown in Figure G, you’ll find a table the shows the history of system usage on both AC and battery power. 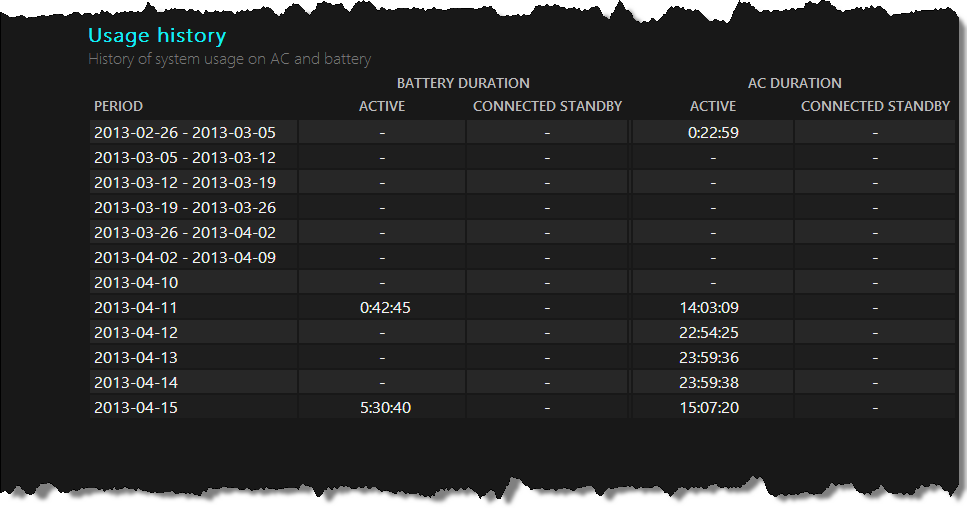 The Usage history section shows the history of system usage on both AC and battery power.

In the Battery capacity history section, shown in Figure H, you’ll find the charge capacity history of the system’s battery. As you can see, this table shows both the full charge capacity and the design capacity, thus providing you with a way to keep an eye on the health of your battery. For example, if you notice that over time, your battery doesn’t hold its charge, this table could reveal that your battery is no longer charging to its full capacity. Again, this example chart is probably skewed because this is a brand new laptop. 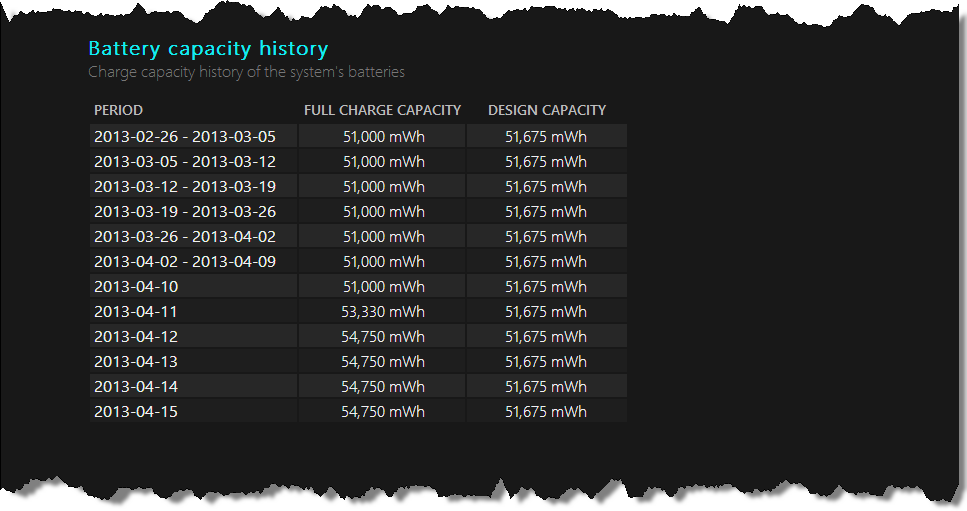 At the end of the report is the Battery life estimates section, shown in Figure I. In this section, you’ll see a table that will indicate how long you can expect the battery to last at a full charge capacity and at design capacity. These estimates are based on the observed drains. This too will provide you with a good indication of the health of your battery. 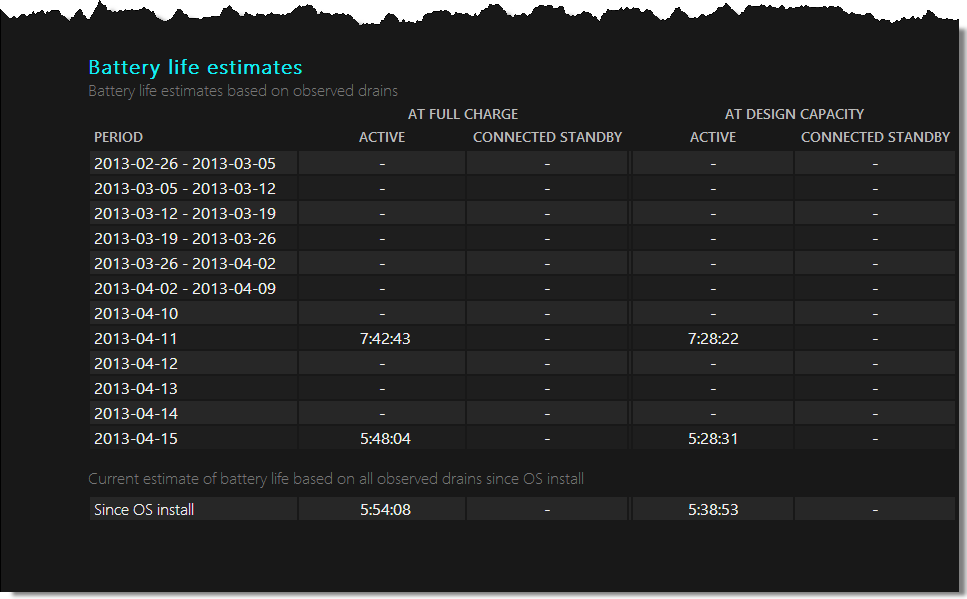 The Battery life estimates section will indicate how long you can expect the battery to last.

Are you running Windows 8/RT on a laptop or table? Have you run the Battery Report? As always, if you have comments or information to share about this topic, please take a moment to drop by the TechRepublic Community Forums and let us hear from you.

Share: Check out the health of your device with the Windows 8 Battery Report
By greg shultz
My first computer was a Kaypro 16 \"luggable\" running MS-DOS 2.11 which I obtained while studying computer science in 1986. After two years, I discovered that I had a knack for writing documentation and shifted my focus over to technical writing.