Google has issued the first developer preview version of its Chrome browser to reach the version 4.x milestone, a phase that should bring some advanced features in the forthcoming HTML 5 specification for web pages but that for now just sports a cloud-based bookmark synchronisation tool.

Google has issued the first developer preview version of its Chrome browser to reach the version 4.x milestone, a phase that should bring some advanced features in the forthcoming HTML 5 specification for web pages but that for now just sports a cloud-based bookmark synchronisation tool. 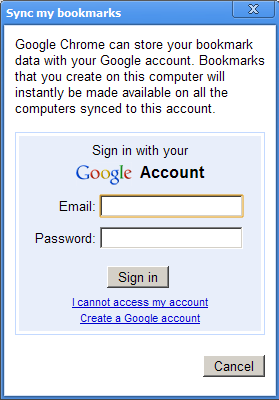 Google's Chrome browser is getting a bookmark sync tool.
Screenshot by Stephen Shankland/CNET)

"Once you set up sync from the Tools menu, Chrome will then upload and store your bookmarks in your Google Account. Anytime you add or change a bookmark, your changes will be sent to the cloud and immediately broadcast to all other computers for which you've activated bookmark sync," programmer Tim Steele said in a blog post on Monday. Steele introduced the Chrome bookmark feature less than three weeks ago.


I set up the bookmarks feature with no trouble on version 4.0.201.1 of Chrome for Windows; note that to get it to work, you must specifically enable it at launch by adding the "--enable-sync" option to the launch command. The wrench menu (think tools) offers the new menu item to synchronise bookmarks. Clicking on it springs open a dialog box that prompts you to log in with a Google account; doing so then sends the bookmarks to the server.

The Mac version of Chrome — which by the way now enables by default plug-ins such as Adobe Systems' Flash and has grown much more stable — didn't yet support bookmark sync on Monday night, so I couldn't test the actual synchronisation itself on my present home set-up.

Google doesn't draw much attention to version numbers, using them more as developer placeholders than beacons for marketing or support purposes. Google updates Chrome automatically, so users often get new versions without even knowing about it. But the new versions can indicate when the company is making significant changes behind the scenes.


Conspicuously absent thus far from the bookmark sync feature is any mechanism to synchronise with Google Bookmarks, the company's cloud-based bookmark service that can be used through the Google Toolbar or the website itself. Google has said it's focusing on the basics first with Chrome.

It's intriguing when Google adds new cloud-based services, given its interest in moving people away from dependence on individual PCs and toward net-based services hosted on central servers. In that same vein, Google is working on several other features that expand what the web can do via an upcoming version of its underlying language, HTML 5.


Among the HTML 5 features set for Chrome 4.x are Web Workers, which let the browser perform background processing tasks without interrupting a web application's user interface, and local storage, which helps a web application work even when a computer is disconnected from the network. Another HTML 5 technology, built-in video and audio that doesn't require a plug-in such as Flash, began arriving in Chrome version 3.

HTML 5 is very much in flux, though. Microsoft, maker of the dominant browser, has only recently joined the HTML 5 discussion in earnest. And last week, Google's Aaron Boodman raised a broader issue, questioning the merit of labelling many new HTML features as version 5.

"I would like to propose that we get rid of the concepts of 'versions' altogether from HTML. In reality, nobody supports all of HTML 5," Boodman said in a message to an HTML 5 mailing list. "Instead of insisting that a particular version of HTML is a monolithic unit that must be implemented in its entirety, we could have each feature (or logical group of features) spun off into its own small spec. We're already doing this a bit with things like Web Workers, but I don't see why we don't just do it for everything."


Version 4 of Chrome also is slated to get a top-requested feature, the ability to recognise when web pages offer an RSS or Atom feeds and to subscribe to them with a service such as Google Reader.