Convert Windows XP into a Windows 7 Virtual Machine with Disk2vhd

Greg Shultz shows you how to use Disk2vhd to move your Windows XP installation into Windows 7 and then run it with Windows Virtual PC.

Would you like to be able to still run Microsoft Windows XP while you get familiar with Windows 7? Well, moving your existing Windows XP system to a virtual machine that you can run in Windows 7 is a relatively easy procedure with the Disk2vhd tool from Microsoft’s Windows Sysinternals team: Mark Russinovich and Bryce Cogswell.

In this edition of the Windows Desktop Report, I’ll show you how to use Disk2vhd, which is a free tool, to move your Windows XP installation into Windows 7 and then run it with Windows Virtual PC.

As its name implies, Disk2vhd is designed to create VHD versions of physical disks. This tool can be used to convert systems running Windows XP SP2 and up as well as Windows Server 2003 and up.

To perform this task, the Disk2vhd utility makes use of the Windows Volume Snapshot feature built in to the operating system. When you run Disk2vhd, it first creates a volume snapshot image of the hard disk. It then exports that image into a VHD that you can then add to Windows Virtual PC as well as to Hyper-V Manager.

In order to ensure a successful virtual machine transition, there are several tasks that you’ll want to perform on your Windows XP system in preparation for the operation. Let’s take a closer look.

You can get and use Disk2vhd in one of two ways. You can download Disk2vhd from the Windows Sysinternals page on the Microsoft TechNet site. Or you can run immediately Disk2vhd from the Live.Sysinternals.com site. Either way, the utility does not require installation, which means that using it is as easy as launching the executable.

I decided to run Disk2vhd from the Live.Sysinternals.com site for this article. Once I clicked on the link, I immediately saw the Internet Explorer File Download – Security Warning dialog box, shown in Figure A. 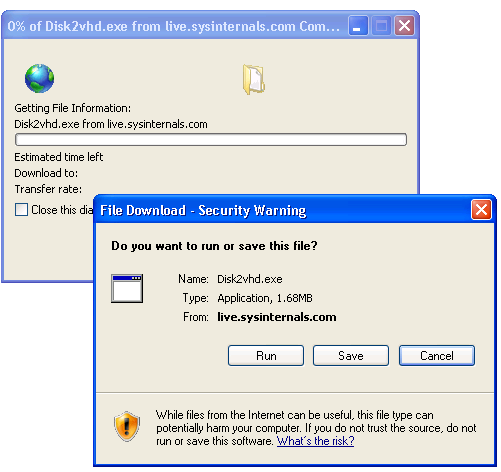 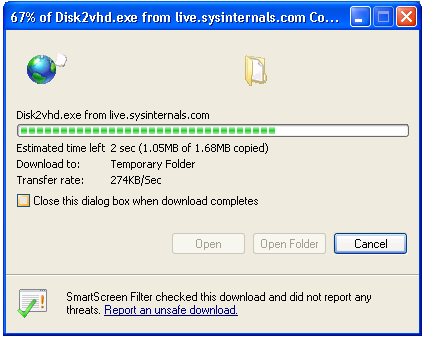 Once the download is complete, the executable begins to launch, which triggers the Internet Explorer – Security Warning, shown in Figure C. 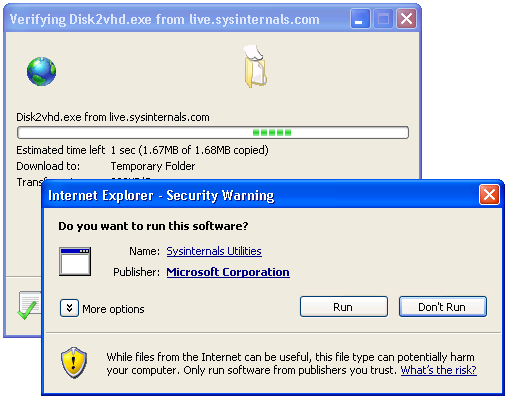 As soon as the executable begins to launch, Internet Explorer displays a Security Warning dialog box.

You’ll then need to accept the Sysinternals Software License Terms, as shown in Figure D. 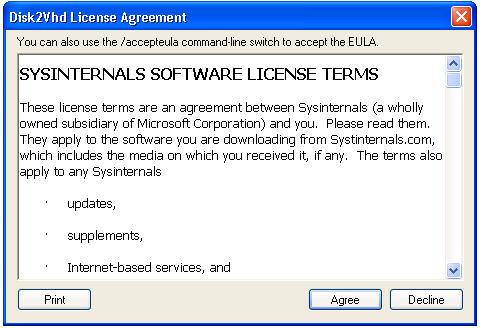 You are encouraged to read through the Software License Terms.

When you get to the main user interface, you’ll see that Disk2vhd automatically selects all the available volumes/drives, sets a default location, and chooses a name for the VHD file. You can choose a different location and name if you want. In fact, the procedure will go faster if you select a different hard disk besides the one on which you are creating a VHD. Then, select the Prepare for Use in Virtual PC check box. As you can see in Figure E, I chose only the main drive and selected an external hard disk. When you are ready, click the Create button. 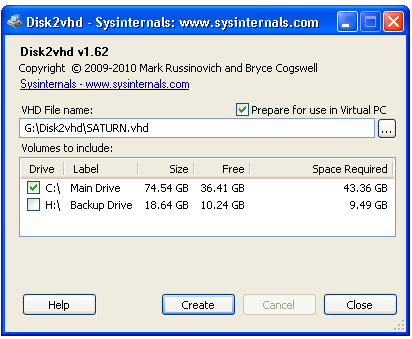 You can choose specific drives as well as a different location and name.

You’ll then have to sit back and wait. Depending on how large your hard disk is and the location of your destination folder, the process can take a while to complete. As the process chugs away, you’ll see the progress, as shown in Figure F. 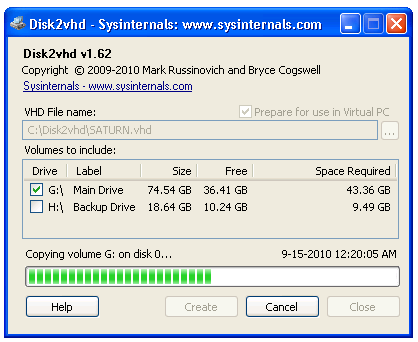 The progress gauge keeps you apprised of the conversion procedure.

For instance, my XP system with about 40GB on an 80GB drive took just a little over two hours to complete the conversion and transfer to an external USB hard disk. When the operation is complete, you’ll see the screen shown in Figure G. 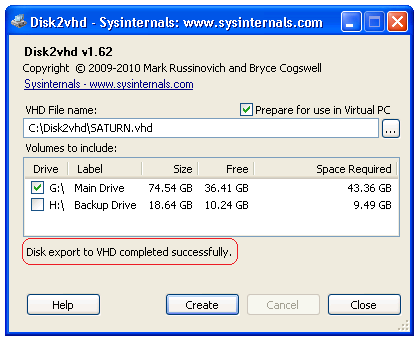 Once you copy the virtual Windows XP system’s .vhd file over to the Windows 7 system, you’ll then open Windows Virtual PC and launch the Create a Virtual Machine wizard, as shown in Figure H. 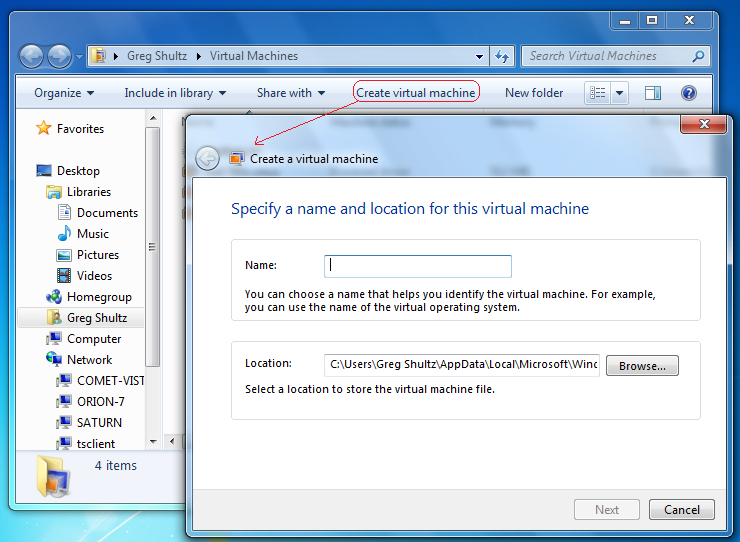 In order to reduce the amount of initial tweaking, I configured my virtual machine to have the same amount of RAM as its physical counterpart, as shown in Figure I. 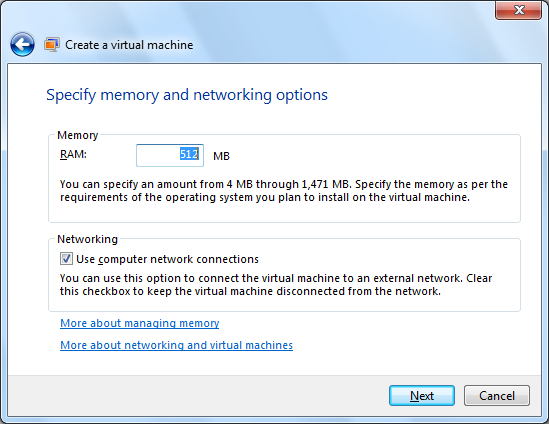 You’ll specify the amount of RAM that you want your Windows XP virtual machine to have.

When prompted to add a virtual hard disk, select the Use an Existing Virtual Hard Disk option and then use the Browse button to locate your .vhd file, as shown in Figure J. When you’ve done so, just click the Create button. 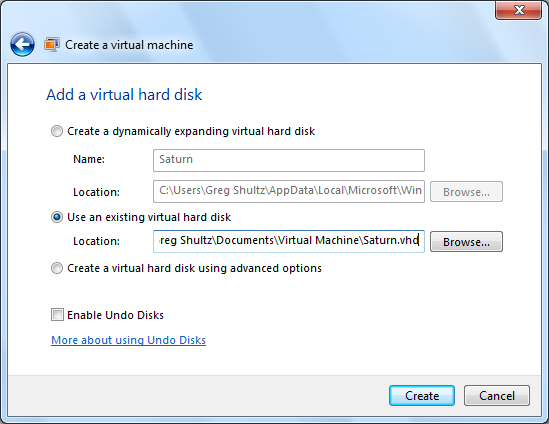 Select the Use an Existing Virtual Hard Disk option and then locate your vhd.

Once the Create a Virtual Machine wizard is complete, then just reopen Windows Virtual PC, locate the new virtual machine, and launch it. Of course, I had to do a bit of tweaking in order to get my XP system running, and because XP was now running on a new system, I had to reactivate Windows XP. However all that was relatively painless, and I was able to run my existing Windows XP installation in Window 7, as shown in Figure K. 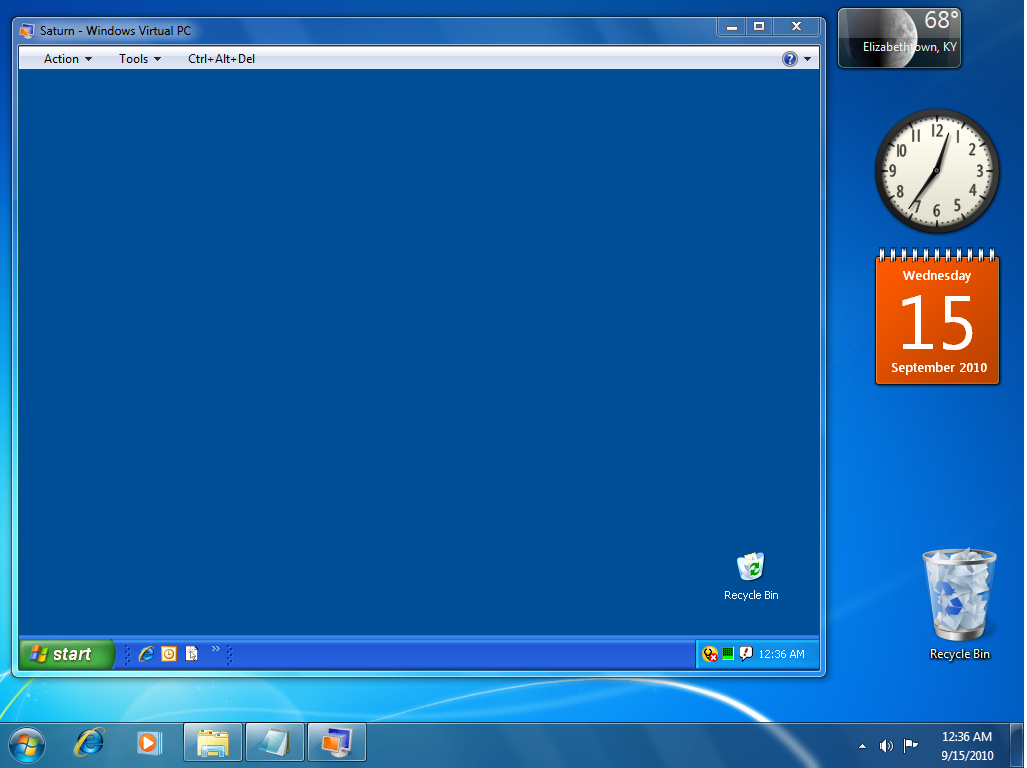 Windows XP is running inside of Windows Virtual PC in Windows 7.

Will you use this Disk2vhd to virtualize your Windows XP system? Have you used Disk2vhd before? If so, what has been your experience? As always, if you have comments or information to share about this topic, please take a moment to drop by the TechRepublic Community Forums and let us hear from you.

Share: Convert Windows XP into a Windows 7 Virtual Machine with Disk2vhd
By greg shultz
My first computer was a Kaypro 16 \"luggable\" running MS-DOS 2.11 which I obtained while studying computer science in 1986. After two years, I discovered that I had a knack for writing documentation and shifted my focus over to technical writing.