Using the Microsoft Windows Vista application Photo Gallery, it is possible to create a professional slide show quickly and easily using the built-in Themes feature. Greg Shultz shows you how to make it work.

A friend of mine recently asked me if I could quickly create a professional-looking slide show that he could run from his laptop while working his company’s booth at a local trade show. When I asked him what he meant by professional, he explained that he wanted to create a slide show highlighting various pictures of his company’s products while a recording of his voice played his marketing spiel.

As we talked more, I learned that this was a last-minute idea and he needed it up and running that afternoon if at all possible. Since he had Microsoft Windows Vista Home Premium on his laptop, I told him that he could quickly create the type of slide show that he was looking for using just Sound Recorder and Photo Gallery with its Themes feature. He had assumed that to create such a slide show would require using some advanced techniques in PowerPoint or Windows Movie Maker — two programs that he wasn’t very familiar with.

After looking over the laptop, his marketing spiel, and the set of photos he wanted to use, I showed him how to get started. When we were done with the project, my friend was very impressed with the result and suggested that I write an article about the technique. After toying with the idea a bit, I decided that the technique could come in handy in a number of situations. So in this Vista Report, I’ll show you how to create professional-looking slide shows using Photo Gallery’s Themes feature.

To create a professional-looking slide show in Photo Gallery that uses the Themes feature, you’ll need to make sure that the video card in your Vista system supports the Vertex Shader 2.0 feature and has a Windows Experience Index score of 3.0 in the Graphics category. If your video card doesn’t meet these specifications, then the Themes feature will be unavailable.

In order to make the recording procedure as easy as possible, it’s best to type your speech in your word processor and practice it several times. Not only will this reduce the likelihood of your getting all tongue-tied while recording, but it will help you to make a more relaxed sounding recording of your voice.

Once you assemble the set of pictures that you want to have in your slide show, create a new folder and copy the pictures to that folder. As you do, rename them in numerical order according to the arrangement in which you would like them to display. For example, 1.jpg, 2.jpg, and so on.

Let’s begin by taking a look at Photo Gallery’s Themes feature in order for you to get your bearings. You can start Photo Gallery by choosing Start | All Programs | Windows Photo Gallery. When Photo Gallery launches, as shown in Figure A, just click the Play Slide Show button or you can press [F11]. 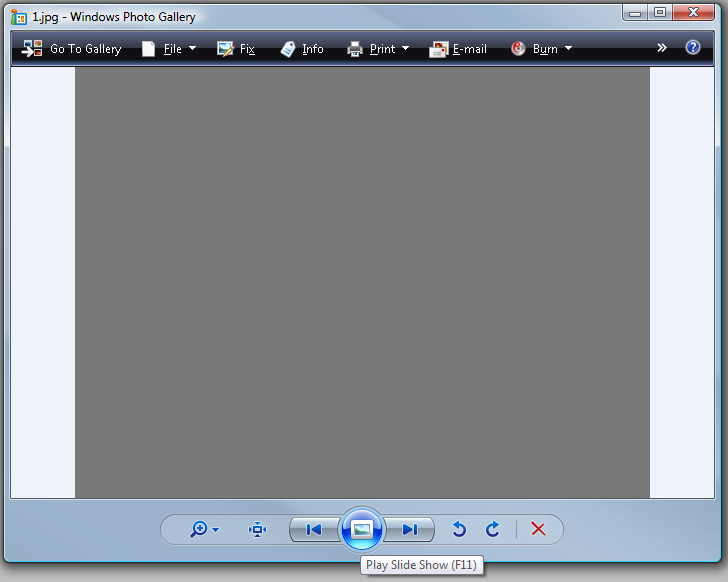 When you do, you’ll see the Slide Show toolbar at the bottom of the screen. If you click the Themes button, you’ll see the twelve available slide show themes on the menu, as shown in Figure B. As you can see, there are seven animation themes, two color themes, and three transition themes. 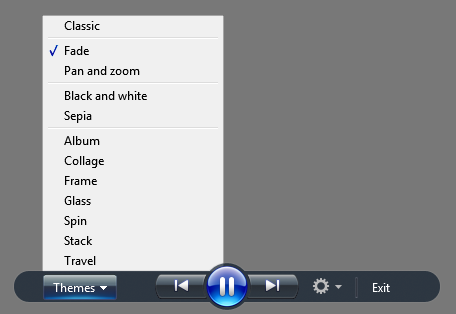 If you click the Tool or Sprocket button, you’ll see the menu shown in Figure C. You can use the Slow, Medium, and Fast options to control the speed at which your pictures switch. Leave the Loop option selected if you want your pictures to display in the numerical order.

As you experiment with the different themes, keep in mind that Photo Gallery remembers the last theme settings you use and will load those settings the next time you run a slide show.

You can adjust the speed at which your slide show plays.

In Windows Vista, Microsoft has greatly extended the length of time that you can record with Sound Recorder. In fact, after experimenting, it would appear that the only limit would be the amount of hard disk space you have available.

In addition, Vista’s Sound Recorder now saves recordings using the Windows Media Audio (WMA) format rather than the old WAV format. This means that you end up with a very good quality recording that’s economical on hard disk space.

You start Sound Recorder by choosing Start | All Programs | Accessories | Sound Recorder. When Sound Recorder launches, as shown in Figure D, just click the Start Recording button. In order to give yourself time to get your slide show up and running, record several seconds of silence before you begin speaking into the microphone.

When you’re done, just click the Stop Recording button, as shown in Figure E. When you do, you’ll see the Save As dialog box and can immediately save your recording.

If you click the Cancel button in the Save As dialog box, you’ll return to Sound Recorder and will see that the button now reads Resume Recording, as shown in Figure F. In this way, you can record your speech in segments if you wish.

You can resume your recording session.

Once you have all the pieces in place, you can run your slide show along with your speech. To begin, double-click the first picture in your slide show, and when Photo Gallery launches, maximize the window.

In Compact Mode, playing your recording is easy.

Have you experimented with the Themes feature in Photo Gallery? Will you use this technique to create a quick slide show? Please drop by the Discussion area and let us know your thoughts.

Delivered Weekdays
Sign up today
Share: Create a quick professional slide show with Vista’s Photo Gallery
By greg shultz
My first computer was a Kaypro 16 \"luggable\" running MS-DOS 2.11 which I obtained while studying computer science in 1986. After two years, I discovered that I had a knack for writing documentation and shifted my focus over to technical writing.