Geekend contributor Edmond Woychowsky thinks Darth Vader is the perfect father role model because he shows dads what not to do.

Growing up with two older half brothers I believe that I had a definite advantage over other kids. One of my half brothers was still living at home during my formative years, and he was a perfect example of how to screw up in every imaginable way.

For instance, I learned at an early age that babysitting a younger sibling doesn’t mean borrowing your friend’s handcuffs, handcuffing the younger sibling’s left wrist and right ankle, turning the television on, and going out to play with your friends. Not only did I figure out this was a good way to get grounded until you’re 26, but I also discovered that mom knew where to find the bolt cutters and the replacement value of handcuffs. 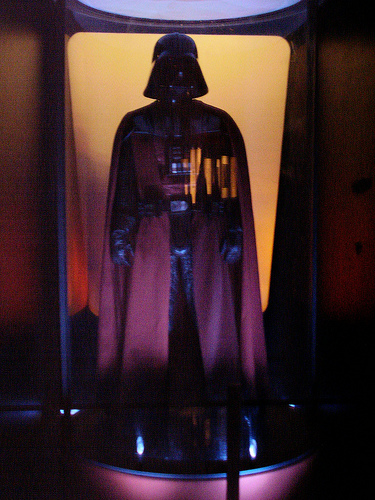 When I became a father, I looked for a role model who could serve me as well as my half brother. I spoke with friends, I read, and I watched television, all in an attempt to find a father figure that I could use as a role model. After much searching it finally struck me that, with an upbringing like mine, Darth Vader is the perfect father role model. (Photo of Darth Vader’s armor courtesy of Thais M.)

You probably think that I’ve lost it, but give me a chance to explain. Yeah, Darth Vader has a borderline personality disorder according to French researchers, but considering that I was looking for examples of what I should and should not do, Darth Vader fits the bill. Think about it — Darth Vader provides a wealth of examples of what not to do when you’re a father.

For starters, Darth Vader wasn’t around for Luke or Leia; in fact, he didn’t acknowledge either child. Darth Vader never changed a diaper, never clean up kids’ messes, and never read Harold and the Purple Crayon to his children. I’m also willing to bet that there wasn’t even an order for support. This proves two things: He was truly evil and that the Empire doesn’t watch Judge Judy.

In addition, Darth Vader imprisoned Leia in the original Death Star. She was only released through the actions of her brother, Luke, Obi-Wan Kenobi, Han Solo, Chewbacca, R2-D2, and C-3PO. Later, Darth Vader even went so far as to have Lea’s boyfriend, Han Solo, frozen in carbonite! Now that I think about it, maybe that isn’t a bad idea for dealing with my daughter’s boyfriends.

And, of course, Darth Vader tried to kill Luke; he actually shot at Luke in Star Wars: A New Hope. How low can a man sink? Whenever I play the Star Wars games with my children, I don’t shoot at them, especially since they learned how to deflect the shots back at me using their lightsabers. Ouch!

In the end, Darth Vader recognizes the importance of family. He even goes so far as to quit his job by throwing his boss down a cooling shaft just so he can spend a little quality time with Luke. Unfortunately, it’s only about five minutes of quality time.

In the end, I feel that Darth Vader can serve as an example to fathers everywhere of what not to do. Do you agree? If not, who are your parenthood role models?