Greg Shultz helps you cut through all the hype surrounding the hardware requirements for running Windows XP Mode in Windows 7 by describing the procedures he went through to determine if hardware would support Windows XP Mode.

I’ve wanted to experiment with Windows XP Mode in Windows 7 for quite some time, but only recently got around to accomplishing that objective. I now have Windows XP Mode up and running on my Windows 7 system and am truly amazed by the way that it works. It really is a very nice piece of work that should help alleviate the types of application compatibility issues that prevented Vista from gaining a strong foothold in the enterprise. Now, companies that rely on applications designed to run in Windows XP, will be able to move up to Windows 7 and still use their old applications.

As I began my initial exploration into what I would need to be able to run Windows XP Mode in Windows 7, I found myself stymied by apprehension, confusion, and misinformation related to the hardware requirements, as well as the lack of readily available instructions on how to get started. As you may know, there are a plethora of articles on the Internet decrying Intel’s lack of support for virtualization technology in many of its CPU chips. This fact alone paints a daunting picture and thus fed my anxiety. Then there is the generalized notion that hardware-based virtualization is something that needs to be enabled in the BIOS before you can take advantage of it.

While I am successfully running Windows XP Mode on my Windows 7 system, the road was fraught with trials and tribulations. I began my hardware exploration on the Microsoft Windows Virtual PC site, which outlines the system requirements for Windows Virtual PC as follows:

My test system for this project started out as a bare-bones MSI box with an AMD Athlon 64 X2 3800+ CPU and 1GB of RAM. So, the first thing that I did was install another GB of RAM. My processor was definitely fast enough and I had plenty of disk space. As such the next question was whether my AMD processor included AMD-V, which is the name of AMD’s hardware virtualization technology.

When I originally built this system in December of 2006, hardware virtualization technology wasn’t much of a blip on the radar, so I wasn’t sure.

“All CPUs AMD is currently shipping, except Sempron, include AMD-V and therefore support XP mode.”

In relation to its older CPUs, AMD stated:

While it would have been better if AMD had provided a list of all the processors that provided AMD-V support, based on this information, I was pretty confident that my AMD Athlon 64 X2 3800+ CPU supported AMD-V.

Assuming that I would have to enable it, I went into the system setup to look for a setting in the BIOS related to AMD-V but didn’t find anything. However, I did notice that the BIOS was dated 10/19/2006. So, thinking that access to an AMD-V setting would be provided in a newer BIOS version, I took a trip to the MSI site and used the Live Update Online service to download a BIOS update. After flashing my BIOS, the new version date moved up to 2/23/2009, but there was still no setting related to AMD-V.

After a bit of searching on the AMD site, I found, downloaded, and installed the AMD CPUInfo utility. While it sort of provided me with the confirmation that my AMD Athlon 64 X2 3800+ CPU supported AMD-V, the information was conflicting. To begin with, instead of identifying the hardware virtualization technology as AMD-V, the CPUInfo utility identified it as Secure Virtual Mode, as shown in Figure A. Furthermore, while it verified that that the CPU supported Secure Virtual Mode, it also indicated that Secure Virtual Mode was not enabled and as such, not available — more confusion. 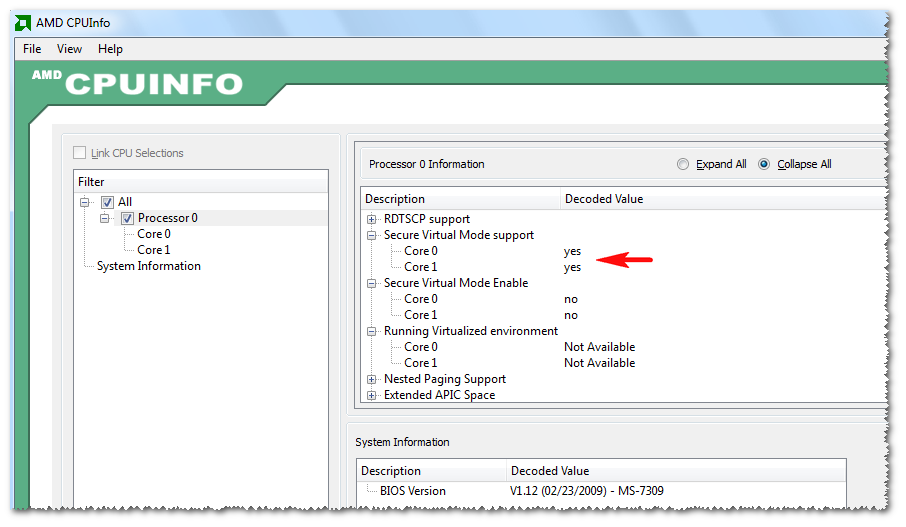 However, Googling Secure Virtual Mode turned up a link to a January 2008 blog entry by John Howard who is a Senior Program Manager on the Hyper-V team, Windows Core Operating System Division. In this blog, John states:

“…On Intel platforms, you can normally turn VT on and off in the BIOS, whereas on AMD platforms, AMD-V is on all the time (at least I have not come across a BIOS which contains an option to enable/disable AMD-V).”

Curious, I then ran the AMD CPUInfo utility again and discovered that while Windows Virtual PC is running, the Secure Virtual Mode is listed as enabled, as shown in Figure B. However, as soon as you close Windows Virtual PC, the Secure Virtual Mode is listed as not enabled. As such, it seems that AMD-V is designed to recognize when it is needed and will automatically enable itself. 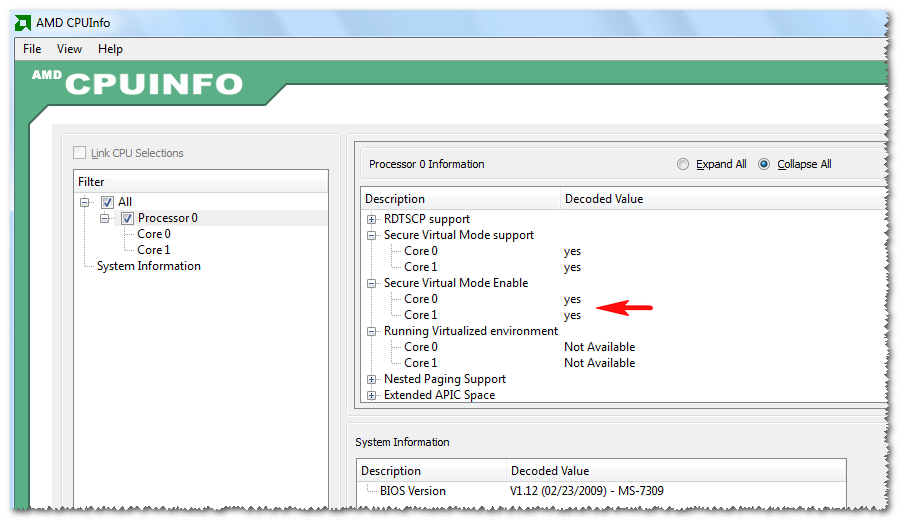 When Windows Virtual PC is running, the Secure Virtual Mode is listed as enabled.

When it comes to using Windows XP Mode in Windows 7 on a system powered by an Intel CPU, I can’t offer any firsthand experience with Intel VT at this time. I don’t currently have an Intel system and haven’t used one in quite some time. I’ll see what I can come up with though.

However, according to articles, such as Ed Bott’s recent Microsoft Report blog How many Intel CPUs will fail the XP Mode test in Windows 7?, over on ZDNet, there are a lot of Intel CPUs that do not provide hardware virtualization technology support. You can find out if your Intel CPU supports Intel VT by using the online Processor Spec Finder or by reviewing the lists on Ed’s blog.

Are you experimenting with Windows XP Mode in Windows 7? If so, what type of CPU do you have Intel or AMD? What was your experience with your hardware? As always, if you have comments or information to share about this topic, please take a moment to drop by the TechRepublic Community Forums and let us hear from you.

Stay on top of the latest XP tips and tricks with TechRepublic’s Windows XP newsletter, delivered every Thursday. Automatically sign up today!

Delivered Weekdays
Sign up today
Share: Determine if your hardware can support Windows XP Mode in Windows 7
By greg shultz
My first computer was a Kaypro 16 \"luggable\" running MS-DOS 2.11 which I obtained while studying computer science in 1986. After two years, I discovered that I had a knack for writing documentation and shifted my focus over to technical writing.