Tony McSherry gives a run through of the applications that come with Windows RT for ease of use.

Like any Windows computer, the Windows RT Surface includes Ease of Access applications. These applications include Magnifier, Narrator, On-Screen Keyboard, and Speech Recognition. 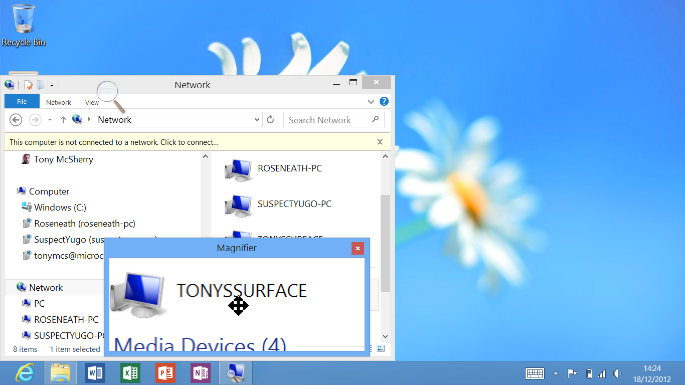 While you are unlikely to use the Magnifier in the RT interface due to the larger typography, the Magnifier works on both the Start screen and RT apps, as well as the traditional desktop. You can choose a variety of different views, such as a fixed split screen at the top, movable lens or full screen. 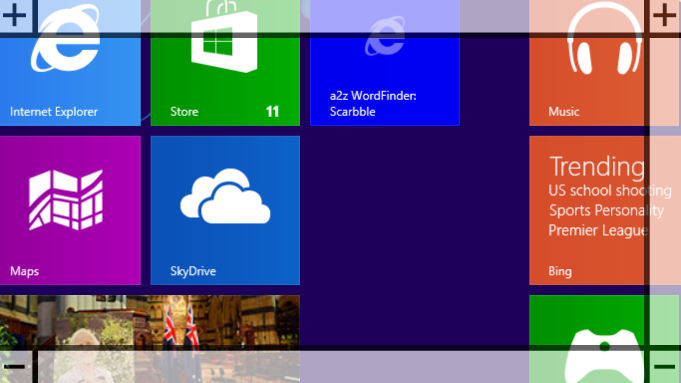 Those of us with ageing eyes who often lose their cheap magnifying spectacles will appreciate the Magnifier for those occasions, but for those with other visual disabilities, it’s a necessary component of the UI. It’s also helpful for some of the apps that don’t have the normal pinch-to-zoom available on parts of their UI.

Narrator does what its name suggests. It will describe UI elements, what you have selected, touched, or moused over, and does a reasonable job of translating text to speech in a pleasant female voice. It will also narrate your actions — either gestures or keyboard keys, and tell you how to activate an item with either double or triple taps. It might also be useful for people who have a better understanding of spoken English rather than written text to improve their reading. Another very useful app for those with vision disabilities. 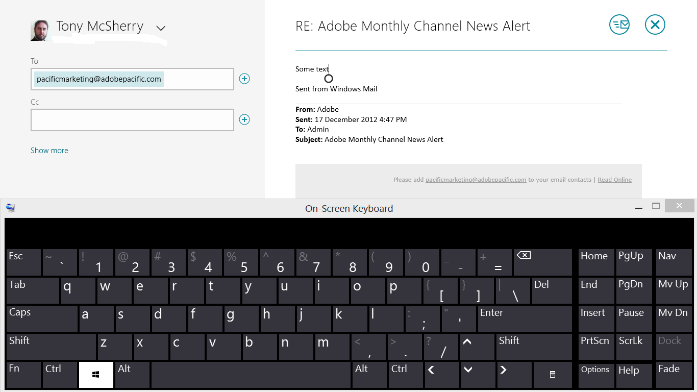 The Ease of Use keyboard is like the standard Windows 7 on-screen keyboard and provides full access to numbers and characters, unlike the normal Windows RT keyboards, which require you to switch. However, the keys are closer together, although the width and height can be altered. Given that the Surface has a keyboard cover as well, it’s almost redundant, unless you’re familiar with the Windows 7 keyboard and want to use it when in touch mode.

Windows RT also provides a standard tablet-style keyboard, a thumb keyboard, and handwriting recognition, which I’m looking forward to trying out with a capacitive pen. Like the Maths Input Panel in the Windows accessories, it works with my finger, but it can be awkward writing that way. 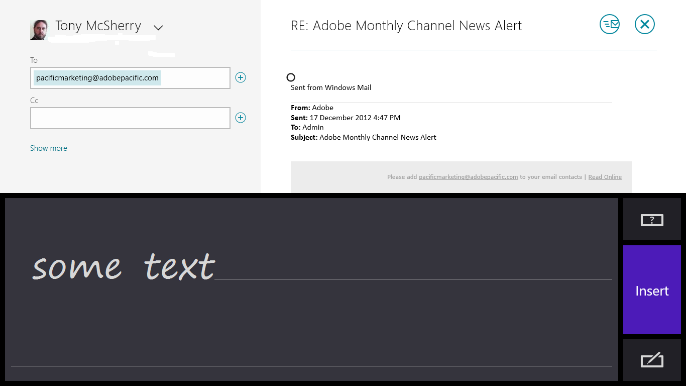 There’s a short scene in Star Trek IV when the original crew are sent back to San Francisco in the 1980s. Scottie offers a formula for transparent aluminium in exchange for some plexiglass to create a whale cage. When directed to a computer, he addresses it as “Computer” and when it fails to respond, he looks confused. The factory owner says “No, you have to use the mouse.” So Scottie picks up the mouse and says “Computer” to it, and then finally gives up and uses the keyboard.

Speech recognition has come a long way since the 80s, but it still has some trouble with accents, and as Apple Siri’s mistakes show, natural speech can sometimes be a problem. However, if you stick to standard editing phrases while dictating, Windows Speech recognition does a good job. There is a comprehensive tutorial available that will take you through common tasks, such as document creation and editing.

It’s also worth recognising that we will all likely suffer a disability at some stage of our life that will restrict our normal access to computers, whether it be failing eyesight, injury, or a lack of mobility/reduced dexterity. Ease of Access applications will give us alternative input methods when we need them.

In a future article, I’ll cover the Windows System applications on Windows RT, which include the old Command Prompt, Windows PowerShell, and the new expanded malware-protector Windows Defender.

Share: Ease of Access on Windows RT
By tonymcsherry
Tony is the owner and managing director of Microcraft eLearning and is one of the creators of the AUTHOR eLearning Development System.