The secret is to keep colleagues at bay and do a job you love...

Working efficiently is a skill that needs to be worked at otherwise your primary activity could become clock-watching, according to expertsPhoto: Shutterstock

We’ve all been there: you’ve got a million things on your to-do list and yet somehow you find yourself reading about a man who ordered a giant monster slipper or watching a video of a skateboarding dog.

Plus you don’t even have to be procrastinating to get distracted – sometimes the worst distractions are work-related. All it takes is for a well-meaning colleague to come over to ask you a question or for an email to grab your attention and your workflow is broken.

But never fear, even in the age of multitasking, open-plan offices and the collaborative work ethos, you can still reduce the number of distractions you face at work and improve your ability to focus.

Here are 10 top tips on keep focused at work.

Executives should be clear on what the most important aspects of the job are to avoid getting side-tracked.

“I get people to do a pie chart of the big things they want to spend their time on and how much time they think that deserves,” Mairi Eastwood, partner at executive coaching firm Praesta, told silicon.com.

Executives could use categories such as time spent with a client, their team or on a particular project.

“Use that to monitor very roughly week by week whether you are actually doing the things you thought were most important to do,” she said.

2. Ignore tasks that are urgent but not important

Workers tend to prioritise work that is considered urgent, but that may not necessarily be the most effective way to work.

“What happens often is that we get sucked into doing things that are urgent and not important because they are somebody else’s important things. People come to us and say, ‘I’ve got to get this done, can you help?’,” Eastwood said.

Using a method developed by time management guru Stephen Covey, Eastwood said workers should decide whether a particular task is urgent, important or both and only do the tasks that are important.

“[People] need to learn to say no to things that aren’t really important,” she said.

3. Ask colleagues to IM before

In the age of collaborative working, now more than ever colleagues are likely to interrupt you when you are working.

“Today’s culture is very much about…

…co-creating so it’s a much more collaborative culture and there are great things about that. But it also means people are much more likely to want input and to seek input and to ask for it,” Eastwood said.

Open-plan office environments seem to make it easier or more acceptable to interrupt someone and such interruptions can be highly disruptive and can make it difficult to get into the flow of work.

According to Eastwood, one way to solve this problem is to ask colleagues to send you an IM if they need to speak with you. That way you are still open to collaboration with colleagues but you can choose when to break off from your work.

If asking colleagues to IM before interrupting doesn’t work, set out times in the day when you want to work completely free of interruptions. For this to be successful, you must also let your colleagues know when they can and can’t contact you.

“Some people do find it quite difficult to say, ‘Not just now’ and I think being able to do that is a skill.”

Creating boundaries at work and managing expectations of your availability to colleagues is necessary in ensuring you have time to focus on your work, according to Philip Bardzil, a chartered occupational psychologist at business consultancy Impact Consulting.

According to Bardzil, it’s important workers “do not become overloaded by either irrelevant interruptions or unreasonable demands which override previously agreed deadlines and objectives”.

“I think we learn nowadays to be interrupted all the time and actually there’s a lot of research now that says multitasking is in the end less effective. Sometimes we have to retrain ourselves to focus on one thing at a time,” Praesta’s Eastwood said.

Instead of constantly going back and forth between a task and your emails, which may then lead you to work on a different task, try to…

…focus on one task for an hour and check your emails after that.

“It’s amazing when you try to do that how you find that you’re being attracted to dropping it for a minute and checking something – you actually have to physically retrain yourself,” she said. 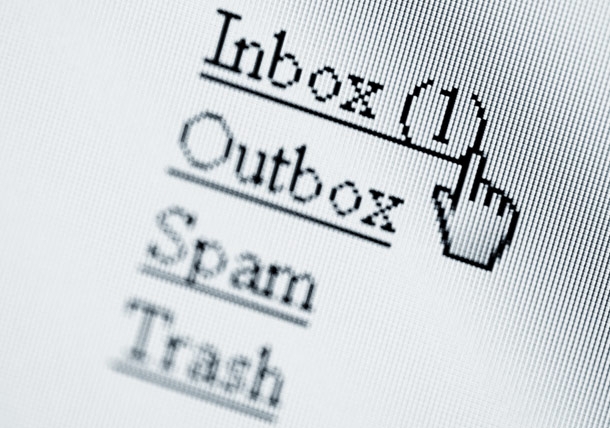 Avoid the temptation to reply to every email the minute it hits your inbox – checking for new messages will interrupt your workflow Image: Shutterstock

The compulsive need to constantly check your smartphone or email account for new messages is highly disruptive to your workflow.

“The immediacy of communication means people feel a pressure to respond right away and so that provides a pressure to be constantly checking your phone,” Eastwood said.

Businesspeople should train themselves to have specific times when they go through their emails and messages and set periods of an hour or so when they do not check their messages at all, she advised.

When the time comes to deal with emails that have built up in your inbox, it can take up a significant proportion of your day, and often many of the emails will be useless.

Praesta’s Eastwood said executives who have a PA should ask them to filter their emails in the same way that post would be filtered.

“Senior people who have PAs – it’s amazing how many of them don’t use their PAs to filter their emails, whereas in the olden days when people had mail their PAs would sort them into urgent, action and ‘for information’,” she said.

Emails which fall under the urgent or action category should be…

…checked daily with the ‘for information’ emails stored to be read at a later date.

While responding to messages on an iPhone or BlackBerry can seem to be a way of cutting the email clutter, it can also become a way to avoid difficult tasks, according to Impact Consulting’s Bardzil.

“These are easy to deal with and can lead to an avoidance approach – which appears to be work but isn’t really – and individuals can end up generating loads of unnecessary exchanges just because it is so easy to do,” Bardzil said.

There will always be times in the working day or week when for one reason or another you are not at your best. Instead of attempting to plough on with work regardless, try to use this time for less challenging tasks.

For instance, read through the emails you didn’t have time to look through before but contain information you need to know, file your expenses claim or catch up on industry news.

9. Do work you enjoy

When you are bored of your job, you are likely to want to be distracted, which makes staying focused virtually impossible.

Nigel Marlow, principal lecturer of business and consumer psychology at London Metropolitan University, told silicon.com that to stay motivated at work, individuals should focus on how their job contributes to the business.

“Have an eye on the bigger picture all the time and know where your work and what you’re doing fits in with the rest of the firm,” Marlow said.

“If the company has a mission and everyone is aware of it and they understand how they are contributing to it, then [employees] will motivate themselves as long as they agree with the mission,” he added.

If you are not engaged with the overall mission, but are instead motivated by cash incentives or perks, Marlow said sooner or later this motivation will wear off.

To find ways to make your work more interesting and fulfilling you either need to discuss getting involved with new projects within your organisation, or you might have to think about finding a new job altogether.

It may sound counterintuitive, but giving yourself less time to work could help you to achieve more.

Marlow points to the fact that during the three-day working week enforced during the 1980s miners’ strike, “production hardly fell”.

However, you don’t have to try to convince your boss that you should be working a three-day week to work more productively. Instead try to divide your day up into segments with a different task for each time segment and include some downtime for easier tasks.

“Psychologically, you can’t concentrate for more than 40 minutes at a time. To think that you are going to come in at nine o’clock and work 100 per cent for eight or seven hours is unrealistic,” Marlow said.