In this edition of the Windows Desktop Report, Greg Shultz introduces you to DisplayFusion and shows you some of the great features for managing multiple monitors tucked away in this program.

Well, he called me the other day and asked if I would come over to his house and give him some pointers on using his new multi-monitor system. When I arrived, I was amazed by the monster system this guy had put together for himself. The system was running Windows 7 Ultimate 64-bit on an Intel Core i7 Extreme Edition 3.33GHz processor with 12GB of RAM and an ATI Radeon HD 5870 graphics card. On the desk he had two beautiful ViewSonic VG2227WM 22-inch widescreen LCD monitors.

To say I was envious is an understatement!

In any case, I learned that he really wished that he could have a taskbar on both monitors as well as better window management features — he really wanted more out of Windows Snap. That’s when I told him about DisplayFusion from the folks at Binary Fortress Software. I’ve used this program for a few years now on my home system with three monitors and have been extremely happy with it.

Over the next couple of days, we installed DisplayFusion Pro on his system and implemented many of its features. As we did so, I realized that this program had many more powerful features than I had realized and that I wasn’t taking full advantage of all the program had to offer.

Since there are a lot of Windows 7 users out there with multiple monitors, I decided that in this edition of the Windows Desktop Report, I would introduce you to DisplayFusion and show you some of the great features tucked away in this program.

To begin with, there are two versions of DisplayFusion: a free, but limited, version and the Pro version, which sells for $25. However, you can download a license key and get a 30-day trial of the Pro version, if you want to try it out first.

Once you download and install DisplayFusion, you’ll find its icon in the Notification Area. Just right-click and select Settings, and you’ll see the Settings screen, like the one shown in Figure A, where you can configure all its features. 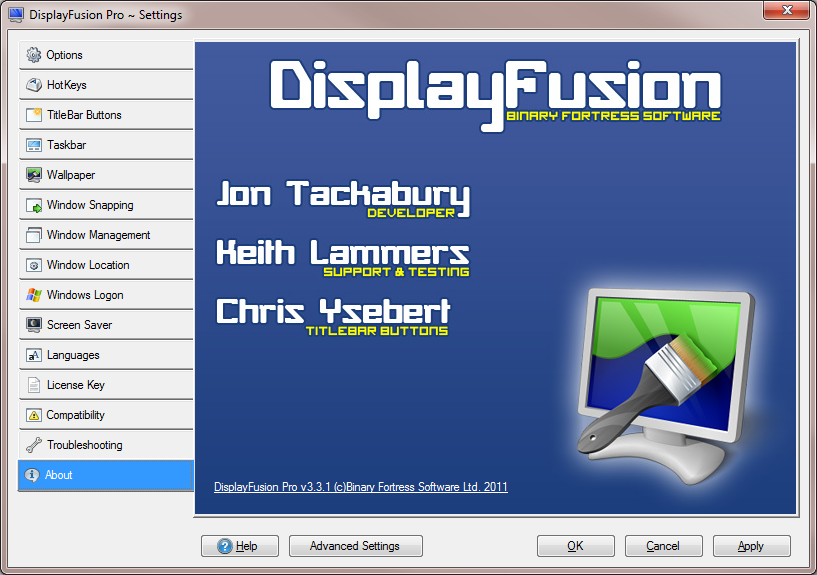 From the Settings screen, you can configure all DisplayFusion’s features.

Of course, one of the primary reasons for adding monitors to your Windows system is to expand your screen real estate. As such, expanding the Windows Taskbar across your other monitor is just a natural extension. To activate and configure this feature, you’ll select Taskbar tab, as shown in Figure B. 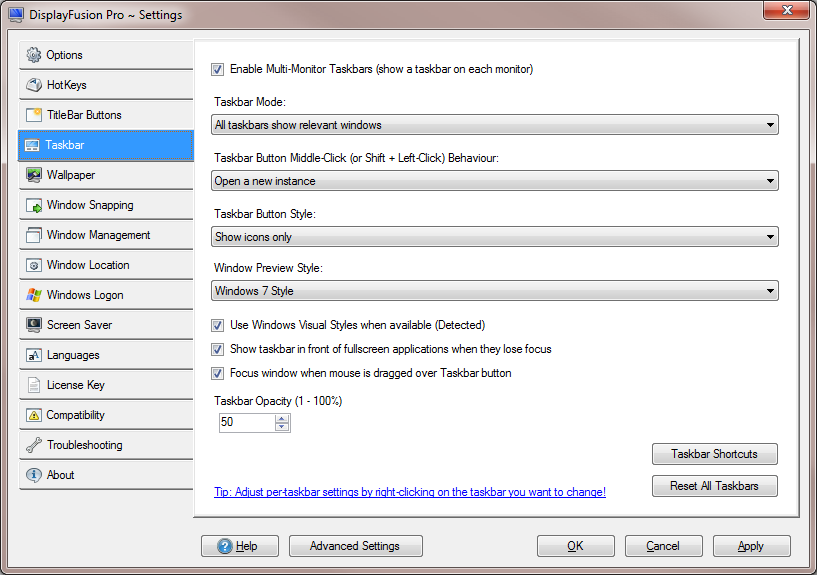 There are a host of options that will allow you to configure the Multi-Monitor Taskbar.

As soon as you enable the Multi-Monitor Taskbar feature, a taskbar appears on each monitor and immediately shows those applications that are open on that particular monitor. This alleviates the overcrowding of the main Taskbar that is a normal occurrence in a multiple-monitor configuration. In addition, this feature can save you time and frustration as it makes it easy to keep track of which applications are open on which monitor. And best of all, when you move a window from one monitor to another, you don’t have to Restore Down the window first — you can just click and drag a Maximized window from one monitor to the next. And when you do so, Multi-Monitor Taskbar keeps track of the window, such that it displays the task on the appropriate taskbar.

There are several other features that are of interest here. 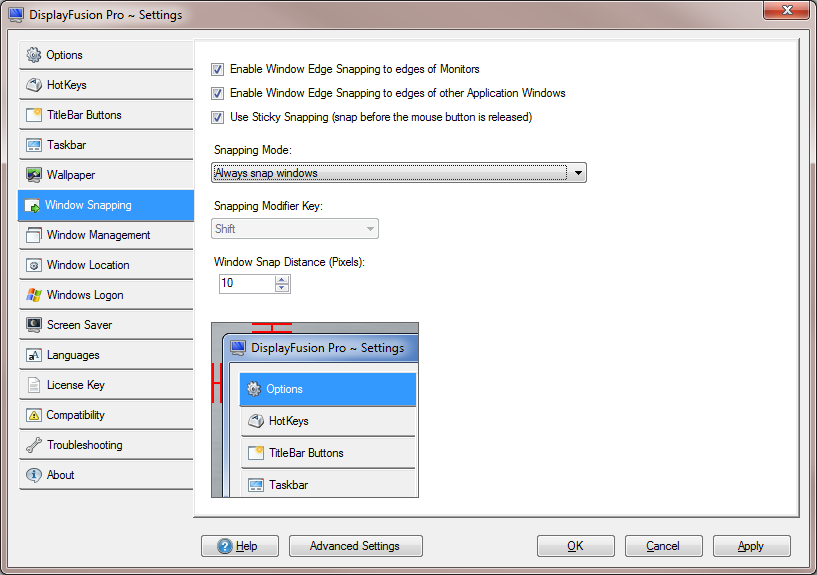 On the Windows Snapping tab, you can enhance Windows 7 native Snap feature.

As you know, when you have multiple monitors, Windows 7’s Snap uses only the outside edges of your monitors, you can’t snap on the edges where your monitors meet. However, you can set the Enable Window Edge Snapping to edges of other Application Windows. This allows you to snap a window to the monitor’s edge and then snap another window adjacent to that one. This will allow you to essentially snap on the edges where your monitors meet. You still have to do a little manual resizing, but as you do, the windows will remain snug against the first window.

If you like the Windows Snapping feature but would like to be able to snap the windows more consistently and accurately than you can do with the mouse, then you may want to memorize or make note of the Move and Size keystrokes found on the HotKeys tab, shown in Figure D. 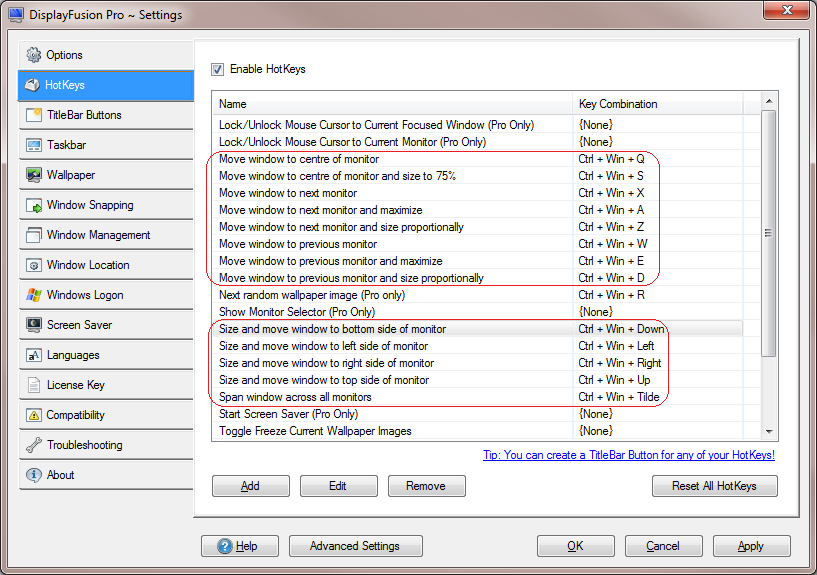 Certain HotKeys will allow you to more accurately snap the windows.

If you like the Windows Snapping feature but don’t want to use your keyboard or take your hand from your mouse to press the HotKeys keystroke combinations, then you might want to use the TitleBar Buttons feature, shown in Figure E. Just click the Add button and select the HotKeys command you want. When you do, you’ll see the TitleBar buttons added to the top of the window. Now, to move or size a window, just click the appropriate TitleBar button. You can even specify custom images for your TitleBar Buttons using the Edit TitleBar Button feature. 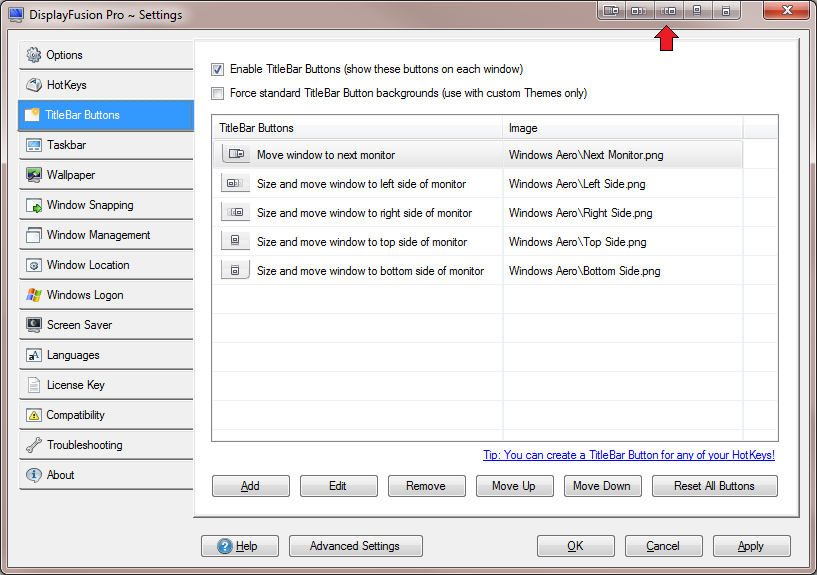 You can see the TitleBar buttons at the top of the window.

If you want to configure specific applications to always open on the same monitor, you can use the configuration settings on the Windows Location tab. For example, I always like Outlook to appear on the right monitor of my three-monitor setup. Therefore, I use the Window Location setting to configure Outlook to open by default on the right monitor, as shown in Figure F. 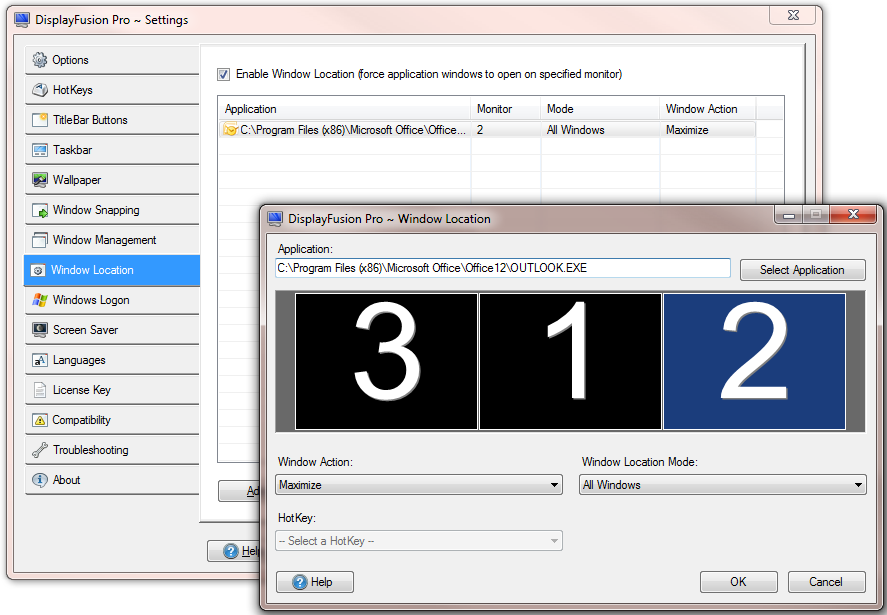 Setting up the Windows Location feature is easy.

While not as mission critical to the efficiency of a multiple-monitor setup, there are other DisplayFusion features that you may want to take advantage of.

Are you using a multiple-monitor setup? If so, do you think that you’ll want to try DisplayFusion? Are you already using DisplayFusion? As always, if you have comments or information to share about this topic, please take a moment to drop by the TechRepublic Community Forums and let us hear from you.

Share: Enhance your Windows 7 multiple-monitor system with DisplayFusion
By greg shultz
My first computer was a Kaypro 16 \"luggable\" running MS-DOS 2.11 which I obtained while studying computer science in 1986. After two years, I discovered that I had a knack for writing documentation and shifted my focus over to technical writing.