Explore the advanced features of the new Windows 8 Task Manager

Greg Shultz shows us around Windows 8's new Windows Task Manager and explains how it puts more advanced features right at your fingertips.

As you know, in Microsoft Windows 7, as well as in previous versions of the operating system, the Windows Task Manager comes in handy in a number of situations because, at a glance, it can show you the programs, processes, and services that are currently running on your computer. If a program is not responding, Task Manager will identify that program and allow you to easily close it. In addition, you can use Task Manager to monitor your computer’s performance by checking the graphs and data on CPU and memory usage. You can also use Task Manager to view network status, and if more than one user is connected to your computer, you can see who is connected.

For Windows 8, Microsoft has revamped the Task Manager, making it both simpler and much more powerful. Average users will find it easier to perform the most common task — killing applications that are no longer responding — and power users will find that it puts more advanced features right at their fingertips.

In this edition of the Windows Desktop Report, I’ll show you around Windows 8’s new Windows Task Manager.

Note: Keep in mind that since this is such an early release of Windows 8, some of the features that I’ll describe in this article may change between now and the time that the operating system is actually released.

The primary reason that most average users turn to Task Manager is to end unresponsive applications. So instead of launching Task Manager in a power-user mode, Microsoft decided to present a very straightforward, simple user interface. Now, when you have an application that is locked up, you can launch Task Manager and immediately see the doomed application and one button titled End Task, as shown in Figure A. Just select the application, click the button, and close Task Manager. 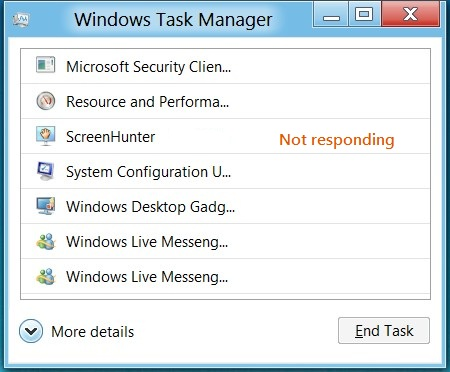 To make it simple to use Task Manager for its primary task, the initial user interface is exceptionally uncomplicated.

Now, if you are a power user, you can click the More Details button and instantly transform Task Manager into a much more comprehensive tool. The tabbed user interface that appears contains seven tabs titled Processes, Performance, App History, Startup, Users, Details, and Services.

On the Processes tab, shown in Figure B, you’ll find a list that breaks the running process into groups titled Applications, Background Processes, and Windows Processes, which is much better than the endless list of unsorted processes that you found in previous versions. To keep the list as uncluttered as possible, only the main process are displayed by default. Any process that contains related subprocesses will have an arrow next to it — just click the arrow and the list expands to reveal all the associated subprocesses. Not only does this make for a nicer display, but this organizational structure comes in really handy when you want to see all the services running under a Service Host process, as shown in Figure C. 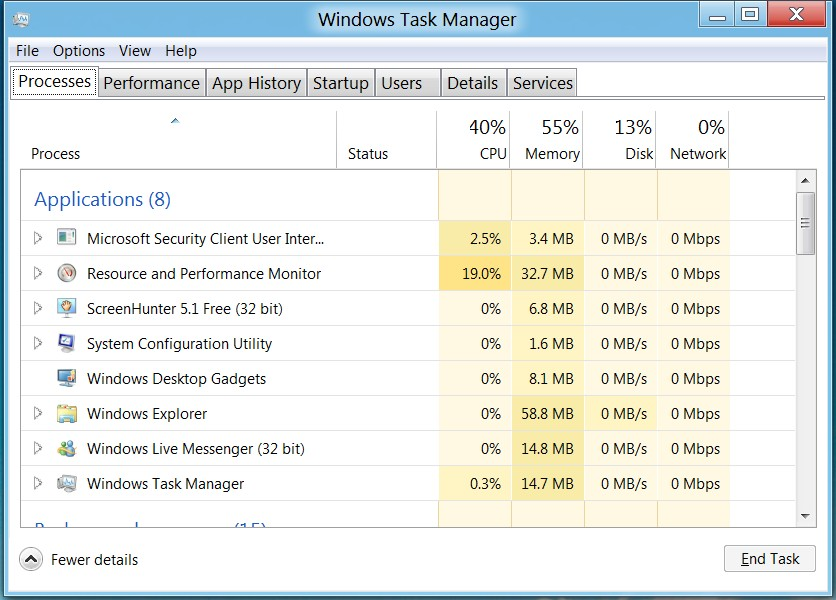 The Processes tab features a heat map that makes it easy to identify applications using more resources than needed. 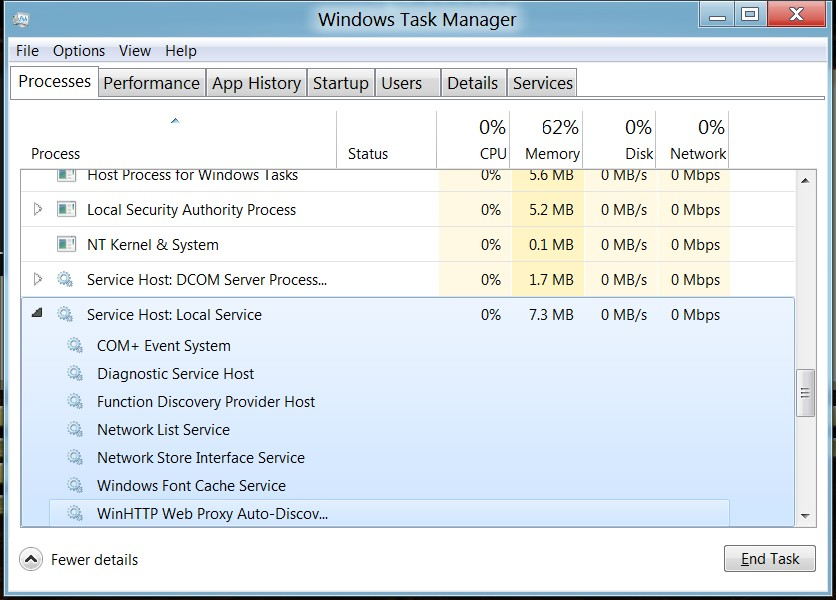 To keep the list as uncluttered as possible, all subprocesses are tucked away until you expand the list.

If you look back at Figure B, you’ll notice that the main column headings CPU, Memory, Disk, and Network all show a percentage of use value. This provides you with an overview of resource usage. In the columns themselves you’ll find percentage of use value for each running process. You’ll also notice that the values in those columns are color coded. Microsoft calls this color coding a heat map, and the darker the color the more resources that process is using. This makes it easy to tell at a glance what process is using the most resources. For example, Resource and Performance Monitor is a darker color of orange because it is using more CPU resources than the other applications.

On the Performance tab, you’ll find data and graphs that show you detailed information on the current activity of the CPU, Memory, Disks, and your Ethernet connection, as shown in Figure D. While I’ve combined them into a composite image, you can see that each component has its own page on the tab so that the information and graph for each component is easily readable. 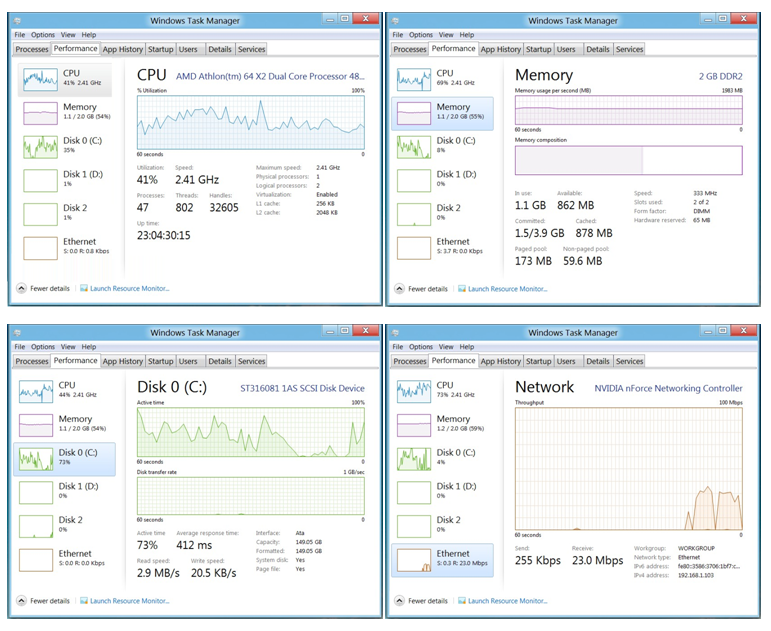 The Performance tab shows data and graphs of the CPU, Memory, Disks, and Ethernet.

On the App History tab, shown in Figure E, you’ll find a list showing how long you’ve used an application, measured in CPU Time, as well as how much resources each one has used, over a time period. At this point in time, it appears that this App History tab is incomplete, as it measures only Apps from the Metro Start screen. However, it looks promising, and I can imagine that this type of data would be very useful for troubleshooting problems. When it is complete, I would expect that the App History tab will keep track of usage data for all applications. 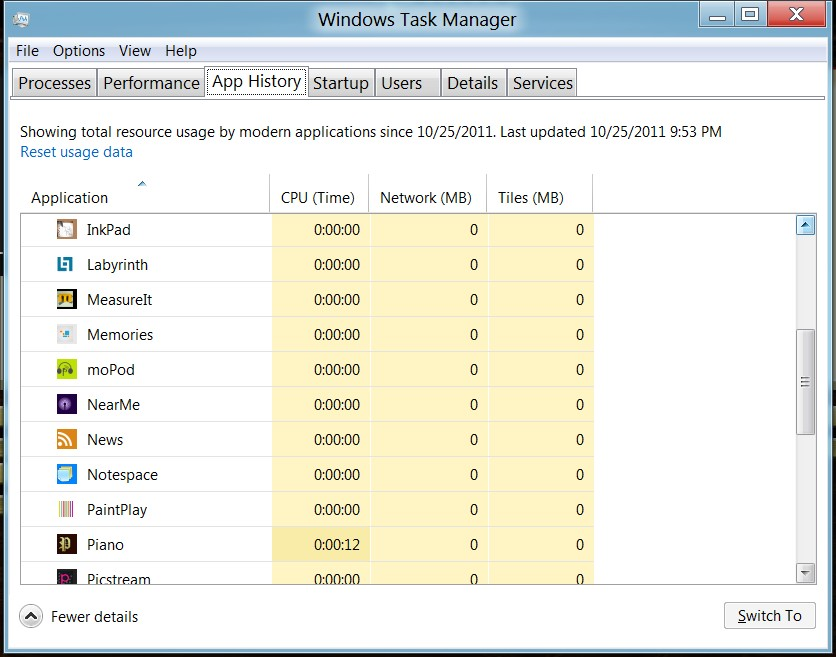 The App History tab appears incomplete at this point in time, but it looks very promising.

The Startup tab, shown in Figure F, provides you with a list of the applications that are configured to start by default each and every time you start the Windows operating system. In previous versions of Windows, you had to turn to the System Configuration tool (msconfig.exe) in order to obtain such a list. Now, it’s right at your finger tips in Windows Task Manager. 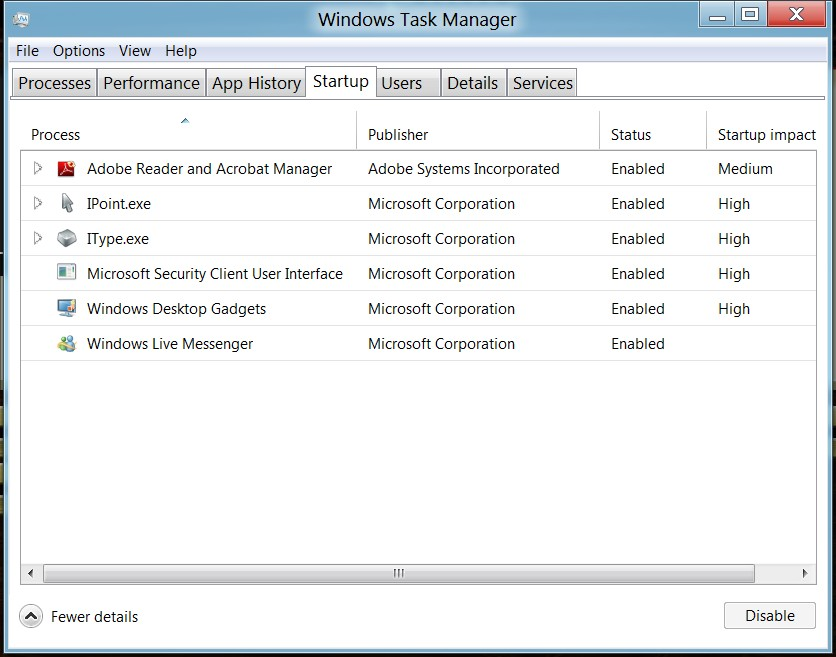 The Startup tab shows you a list of applications that are configured to launch with the operating system.

If you want to remove an application from startup, just select it and click the Disable button. The button will then toggle to Enable so that you can re-enable the application later.

On the User tab, you can see a list of anyone who is logged on to the system, as well as a complete list of all the programs that they are running, as shown in Figure G. You can also see the same type of current resource usage data found on the Processes tab. 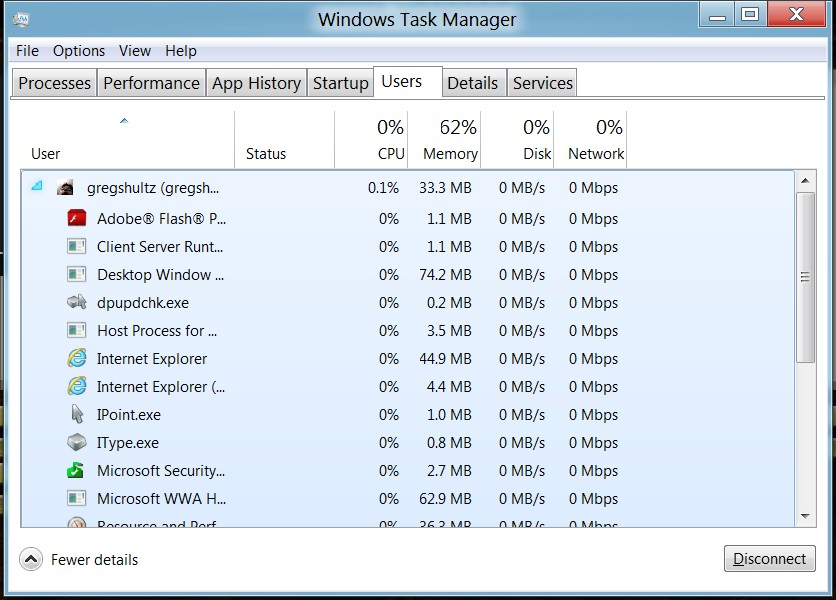 The Users tab show a list of logged-in users and what applications they are running.

The Details tab, shown in Figure H, looks just like the Processes tab in previous versions of the Windows operating system. 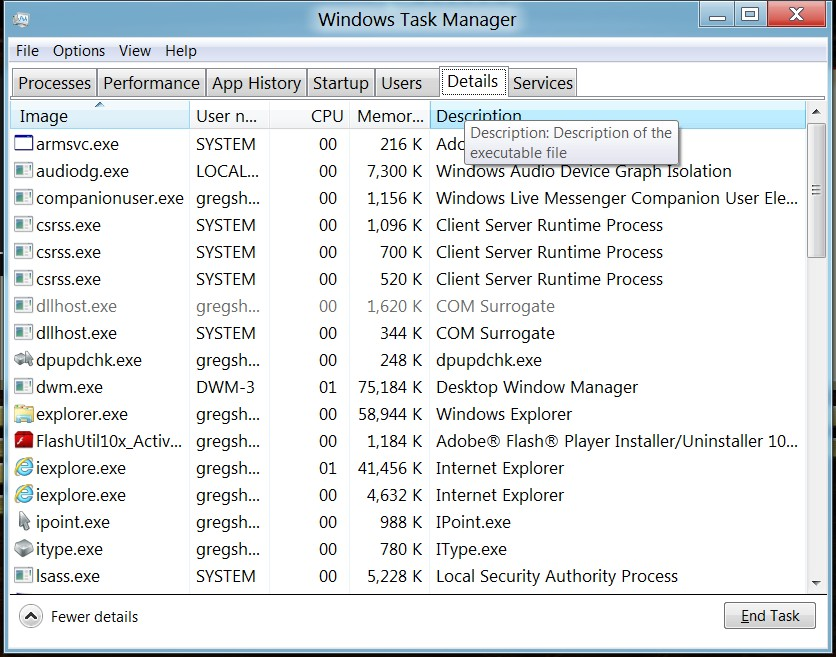 The Services tab, shown in Figure I, provides you with a convenient way to quickly view the services that are running just like the Services tab in the Windows Vista and 7 operating systems. 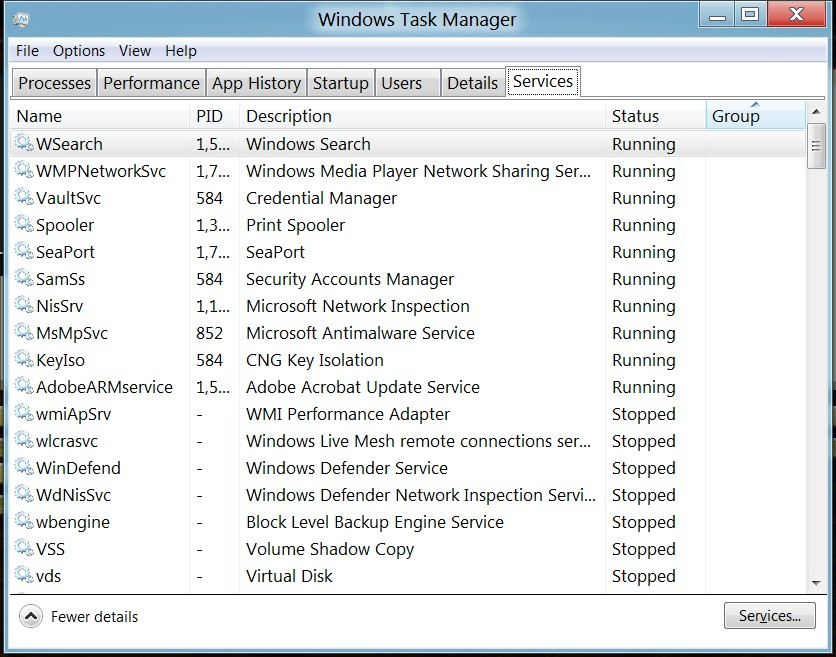 What do you think about Windows 8’s Task Manager? As always, if you have comments or information to share about this topic, please take a moment to drop by the TechRepublic Community Forums and let us hear from you.

Delivered Weekdays
Sign up today
Share: Explore the advanced features of the new Windows 8 Task Manager
By greg shultz
My first computer was a Kaypro 16 \"luggable\" running MS-DOS 2.11 which I obtained while studying computer science in 1986. After two years, I discovered that I had a knack for writing documentation and shifted my focus over to technical writing.