TechRepublic member dcolbert discusses his experience with Facebook's frequently-changing privacy settings, and how his increased exposure was actually somewhat liberating. Do you agree that the erosion of privacy is inevitable?

jasonhiner thought my opinion of Facebook honestly couldn’t sink much lower, then I saw this: http://bit.ly/cFoi81

This link leads to an article about Mark Zuckerberg, co-founder of Facebook, who had a conversation with a friend at Harvard about how the students are “dumbf**ks” for trusting him with their private information. Keep in mind, at the time, Zuckerberg was an arrogant, 19-year-old, Harvard-educated douche bag.

Today (seven years later), Zuckerberg is probably worth a bajillion times the net worth of Hiner, myself, and all the other writers on TechRepublic combined. Of course, that doesn’t mean he’s entitled to act like an arrogant turd, but it does point to the fact that he might be a lot smarter than the people who spend their time writing about him. As brilliant as Mark may be, however, my guess is that he isn’t man enough to fill the shoes he’s found himself wearing.

The article went on to discuss the brutal, aggressive approach that Facebook has toward privacy. Here’s the first point, which I found to be quite accurate:

“And this does appear to reflect Mark’s own views of privacy, which seem to be that people shouldn’t care about it as much as they do – an attitude that very much reflects the attitude of his generation.”

This statement resonated with me. When I was younger, I had “friends” that used to call me up and use black boxes, war dialers, and tone generators to play all kinds of illegal games with the telco companies. These guys could set up party-line calls when party-line calling was supposedly “unavailable,” and that was just the tip of their iceberg.

My wife worked for Chip Gracey, CEO of Parallax and inventor of the IcePick, a memory-dumping device that existed solely to pirate Commodore video games. Because of the generation we grew up in, we’re uber-paranoid and nuts about being locked down and having the strictest application of security possible. Mark Zuckerberg’s generation, though, basically resigned itself to the fact that the erosion of privacy is the future – it’s as inevitable as death and taxes.

The thing is, as an early adopter of MySpace, I’ve felt driven to Facebook because it provided me privacy and security and a sense of well-being that MySpace was sorely lacking. Early on, I had Facebook locked down so well that no one could find me, and that was nice – not because I had anything to hide, but simply because Facebook worked on my terms. I was in control of my own personal privacy on Facebook.

And then Facebook changed their privacy settings. I didn’t lock it down in time, so people found me and sent me friend requests. Now, in general, this hasn’t caused a lot of problems – and in fact, it has reconnected to some people I’d lost touch with (and we’ll get to how I feel about that later) – but at the time, the loss of control bothered me. I actually prefer the way it used to be.

Facebook lost a little bit of freedom the minute it became so open that I had to behave, for lack of a better word, “professionally” on it. It wasn’t a private space where I could kick back, relax, and fully be myself. Instead, it became a place where I had to often mind my opinions and consider if I was releasing TMI.

And that is really what it comes down to. Jason Hiner, Mark Zuckerberg, Donovan Colbert – all of us have public, professional faces but also personal faces that we share only with our closest friends and in appropriate situations. Mark Zuckerberg’s e-mail correspondence with his friend was his personal face, the face he doesn’t disclose to the public. The fact that his private e-mail is now coming back to haunt him illustrates both Zuckerberg’s own point (ironically) and the concern of privacy advocates.

But Zuckerberg grew up in a generation that seems to be implicitly better at accepting that sometimes your private face becomes public, and that’s just how it works, especially if you chase fame and fortune – or if fame and fortune find you.

“Mark really does believe very much in transparency and the vision of an open society and open world, and so he wants to push people that way. I think he also understands that the way to get there is to give people granular control and comfort. He hopes you’ll get more open, and he’s kind of happy to help you get there. So for him, it’s more of a means to an end. For me, I’m not as sure.”

If this is really Zuckerberg’s philosophy, then his goal of granular privacy leading to transparency has been successful with me, at the very least. As I suggested above, I grew up in a world that considered George Orwell’s 1984 a very real possibility. I’m distrustful of corporations and government, and I’m wary of the potential abuses of technology. 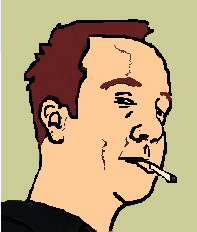 When Facebook first “exposed” me with “enhanced privacy” that made me visible to the world, I felt betrayed, naked, and vulnerable. But in time, I came to find it somewhat liberating, rewarding, and empowering. Once everything was out there, I found a certain ability to “just be myself.”

When the last round of security erosion on Facebook came out, all of my professional friends on TechRepublic and in the IT industry posted Facebook warnings of the impact of these changes and how to correct the issues. My sister in Sacramento called, asking me for help. I gave her links to articles on TechRepublic, but I told her that I couldn’t walk her through the steps.

“Why can’t you help me,” she asked, knowing that I’m an IT professional and do these kinds of things for a living.

“Because,” I said, “I haven’t done them myself, so I’m not sure what the steps are. I just don’t care enough to worry about things like these.”

I don’t want to become a victim of identity theft, or phishing, or any other criminal invasion of privacy – but at the same time, I’m not going to hide myself from the future, which is clearly arriving here today.

I’m not suggesting that you should give up all privacy, expose your entire life to the Web, or trust Facebook, Google, Microsoft, or Apple with the most intimate details of your life. Rather, use caution and common sense when dealing with any source that publishes your personal information on a public forum.

And at the same time, maybe we should all relax, open up, and trust a bit. The rewards may very well outweigh the risks, if we can just learn to let our guard down every now and again.

Delivered Weekdays
Sign up today
Share: Facebook proves that the erosion of privacy is inevitable
By dcolbertmatrixmso
I spent several years with MCI SGUS/VANSIS in the early 90s providing support for early ebusiness dialup applications including CampusMCI, California Smog Check II Vehicle Information Database, California Firearms Information Systems and others. \ \ In 1997 I moved to Fulltime Systems, makers of Octopus, CoStandBy Server and Fulltime Cluster (Legato Cluster) and Data Replication. \ \ In 2001 I joined Intel's Supplier Integration Systems group, part of the global eBuisness team tasked with making Intel a 100% eBiz company by 2003. \ \ I currently work for a medium sized organization hosting Electronic Medical Practice applications. \ \ I am experienced with Win32, Linux and Unix platforms - with an emphasis on systems design, implementation and support.\ \ You can follow me @dcolbert on Twitter. My personal blog, which often deals with non-technology and controversial subjects is at http://piddlyd.blogspot.com/