Word’s Change Case feature has long been one of its handiest devices. It’s not smart enough to apply true title case (where articles and prepositions are left uncapitalized), but it will still save you a significant amount of time. So now that you’re using Word 2007, how do you make the feature work? If you’re ...

Word’s Change Case feature has long been one of its handiest devices. It’s not smart enough to apply true title case (where articles and prepositions are left uncapitalized), but it will still save you a significant amount of time.

So now that you’re using Word 2007, how do you make the feature work? If you’re a keyboard shortcut person, nothing has changed: Shift + F3 will toggle selected text from one style of capitalization to the next. But if you like menus better… DOH. No menus in Word 2007. Here’s a quick feature recap and a look at how it works in the new version.

Note: This information is also available as a PDF download.

In Word 2003, you select your text, pull down the Format menu, and choose Change Case. Word displays a dialog box with options for:

Just choose the desired format and click OK to apply it.

In Word 2007, you have to readjust your thinking a little bit. Click the Home tab on the Ribbon and then find the Change Case button in the Font group. Click it, and you get what’s billed as a Change Case “gallery” (Figure A), although it doesn’t give you a live preview of your selection as other galleries do. It’s really just a menu, but don’t tell Microsoft.
Figure A


Choose the format you want from the list — you’ll notice the options are identical to the ones in Word 2003, except that we now have the more honest and accurate Capitalize Each Word instead of Title Case. Same thing. As soon as you choose an option, Word will apply the change.

If you decide that Change Case belongs on your Quick Access Toolbar (so that you don’t have to go tab-hopping looking for it), it’s easy to put a button on there. In fact, you can put THREE Change Case buttons on there: One is called Change Text Case, and it acts just like the Shift + F3 shortcut, toggling from one format to another with no lists or dialog boxes presented. Another one displays the Change Case gallery shown above (ChangeCaseGallery). And the third one displays an old-fashioned Change Case dialog box similar to previous versions of Word (ChangeCaseDialogClassic).

To add one of these buttons, first click the Customize Quick Access Toolbar button at the end of the toolbar and choose More Commands. Select All Commands from the Choose Commands From drop-down list. Scroll down to Change Text Case, if that’s the one you want, and select it, as shown in Figure B. Just click Add to place it on the Quick Access Toolbar and click OK.
Figure B 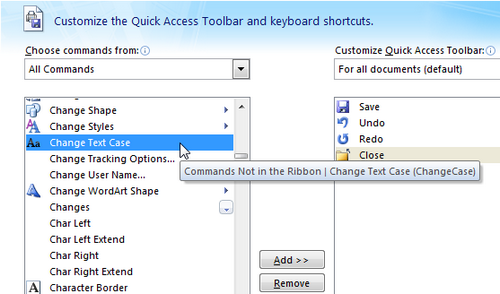 If you want the gallery or the classic dialog box button, locate the two Change Case items on the list, as shown in Figure C. You can use the tooltip description to determine which one you want before selecting it and clicking Add.
Figure C 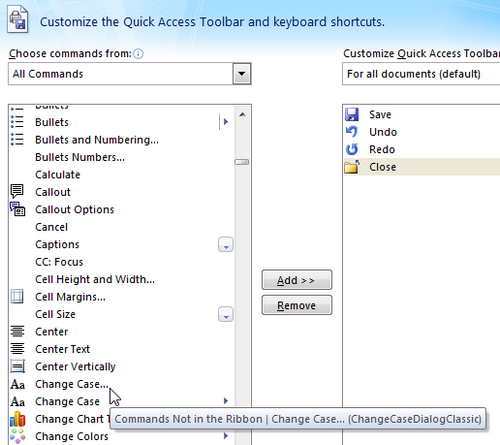 For those of you who are curious, Figure D shows the Change Case dialog box you can access if you put the ChangeCaseDialogClassic item on your Quick Access Toolbar.
Figure D 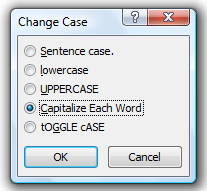 One final note: Everything discussed here works exactly the same way in PowerPoint 2007, except that it gives you only one Change Case command (ChangeCaseGallery) in the All Commands list for customizing your Quick Access toolbar. And that’s probably plenty.

If you’re transitioning to Word 2007 and can’t find that command or button that used to make an everyday chore a snap, let us know. We’ll try to track down the Word 2007 way of doing things and post the steps here.

Share: Find it in Word 2007: Change Case
By Jody Gilbert
Jody Gilbert has been writing and editing technical articles for the past 25 years. She was part of the team that launched TechRepublic.