First impression of Apple TV: easy to use and nice for video podcasts

Later this week, TechRepublic will be cracking open the Apple TV and taking pictures of the guts, the same way we did with the Nintendo Wii and the Playstation 3. Miraculously, for all of the devices that we’ve cracked open so far, all of them have still worked when we put them back together. Nevertheless, ...

Later this week, TechRepublic will be cracking open the Apple TV and taking pictures of the guts, the same way we did with the Nintendo Wii and the Playstation 3. Miraculously, for all of the devices that we’ve cracked open so far, all of them have still worked when we put them back together. Nevertheless, I didn’t want to tempt fate, so I took the Apple TV home over the weekend and tested it before it goes into major surgery.

Some of the TechRepublic staff heard a rumor that the Apple TV only supported WEP security and not WPA, and we were concerned about that because of the weakness of WEP (though it’s still better than no security, which remains the default for a ton of SOHO users). So, I made a point of connecting the Apple TV via wireless. I have a WPA-only wireless network with an SSID that is not broadcasted. When the Apple TV booted up, I entered my SSID and the password and it immediate connected. The no-WPA rumor was quickly dispelled.

Within 10 minutes, I had the Apple TV booted, connected to my wireless network, and connected to iTunes on my laptop. I was pretty impressed with that ease of use and the quickness of the setup (since I have very little patience for technology that takes all afternoon to configure on a weekend).

What I really wanted to do with the Apple TV was use it to watch video podcasts from kentuckyderby.com. I’m a horse racing fan (one of the crazy ones who actually likes the sport and not gambling on the ponies), and this is a great time of year because there is a big race nearly every weekend leading up to the Kentucky Derby, which is on the first Saturday in May. Now kentuckyderby.com has a pair of video podcasts for following its prep races – one contains videos of the races themselves and the other has commentators talking about them.

I downloaded videos from both sets of podcasts to iTunes on my laptop. Then I browsed to them with the remote control of the Apple TV. I decided to just stream them from the laptop rather than sync (download) them to the Apple TV’s 40 GB hard drive. I also wanted to see how well the Apple TV content did when it streamed, since it has such as small hard drive. I ended up being impressed with the streaming. There were no hangs or buffering problems. Of course, it was dealing with small files in this case. I’d like to see what happens when it is streaming an 10 GB movie file.

However, it felt really cool to be able to sit on my couch and flip through all of these races on my LCD TV and watch them on demand. I loved the control I had over the content. This experience is the future of content consumption. Naturally, it has major implications for advertising. I think the day is coming when most advertising will run along the bottom or the sides of the screen, or in pop-ups in the corners. The 30-second TV spot could become extinct (or at least much more rare).

Ultimately, the Apple TV felt like a consumer electronics device and not a computer hacked into an audio/video box, but you have to manage most of the content from a computer. This is a nice step forward in user experience. Nevertheless, there are still caveats. With the Apple TV, you are locked into iTunes (and its heavy DRM restrictions) and MPEG4 video. So, this is not the device for watching your home movies (unless you want to do a bunch of file conversions, which is impractical and tedious for most people).

That being said, there are already a lot folks who are hacking the Apple TV to work around the drawbacks. But at $299, it seems to make more sense to buy an Xbox 360 at $399 and get a DVD player and a less restrictive (albeit not as easy to use) device with a lot more video capabilities. That’s something to consider if you are in the market for a device to connect your digital content to your living room.

Below is one of the images from the gallery that I did of my experience in streaming kentuckyderby.com podcasts to the Apple TV. 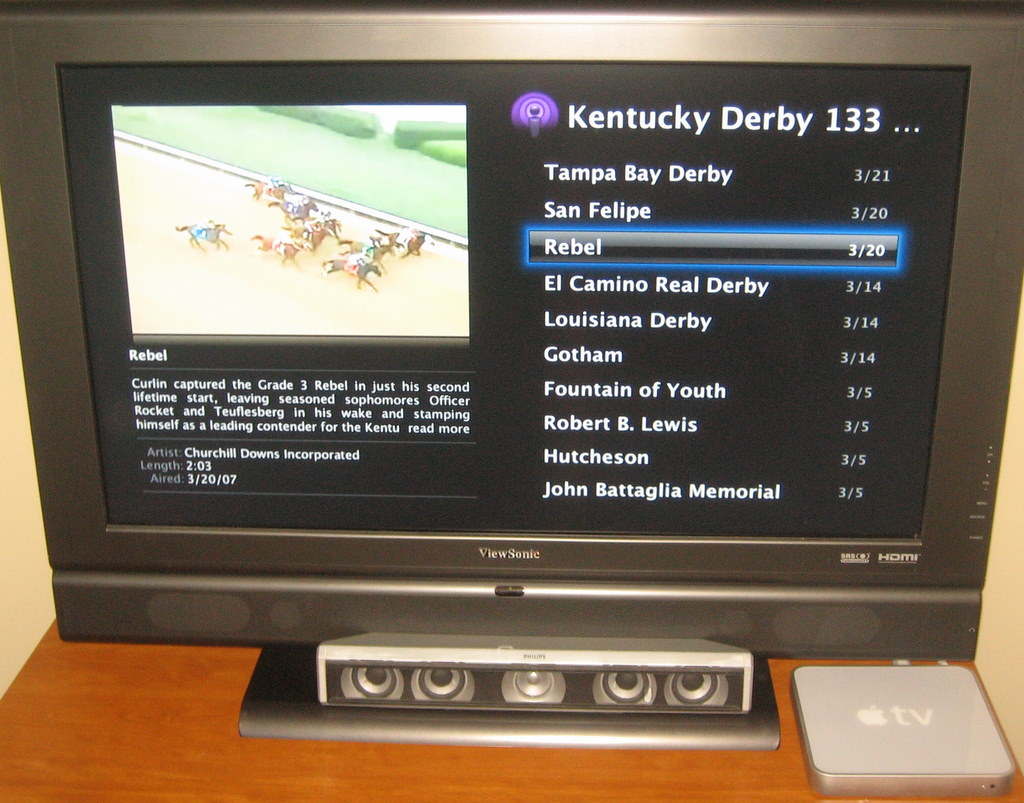 Share: First impression of Apple TV: easy to use and nice for video podcasts
By Jason Hiner
Jason Hiner is Editorial Director of CNET and former Editor in Chief of TechRepublic. He's co-author of the book, Follow the Geeks.