Four things Google Plus changed while you weren’t looking

Several recent Google+ improvements make the service more worthwhile, easier to use, and an interesting competitor in the social network universe.

Google+ arrived in an invite-only “field test,” in late June, and then opened up to the public in late September. Does that mean it’s feature-complete and out of beta? Oh, please.

Google’s social networking (and “identity service”) changes little bits of its look, and sometimes adds entirely new features, quite regularly. The changes aren’t as drastic as those Twitter and Facebook seem to make every six months, and the reaction from tech news and bloggers isn’t quite as cacophonous, given the slight-but-growing influence of Google+. But most of the latest Google+ improvements make the service more worthwhile, easier to use, and an interesting competitor to its two competitors in the social network market.

On their own, the first version of Hangouts were a pretty neat tech demo – 16-way video chat that actually worked, kept stable by Google’s servers. And you could watch a YouTube video simultaneously with people you knew! Not much of a business or productivity angle, but, hey – kittens! 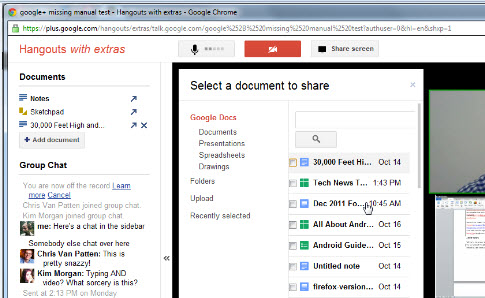 Now, when you click to create a Hangout (in the right-side toolbar of the main Google+ page, or any particular stream), you’ll see a link with an option to choose a “Hangout with Extras.” Yes, it’s a goofy naming and release scheme that Apple would never try, but give Extras a try, and you’ll find quite a few nifty tools that provide free alternatives to traditionally cumbersome software setups, much like Hangouts somewhat supplants Skype video calling.

You can get to work right away writing notes in a scratchpad file (which is automatically saved to your Google Docs account) or drawing in a sketchpad (also saved automatically). Alternately, you can share a file from your Docs account and open it up for access to your Hangout partners, or even share a particular window from your system for live screencasting. Oddly enough, synchronous YouTube viewing is disabled in the “with Extras” package, but it’s likely to make a return.

If you have a lot of friends on Google+, or post items that get some notice publicly, Google+ can quickly overwhelm you with notifications: emails, smartphone pings, and that little red box in your Google toolbar that always seems to be demanding your attention. But check out the Google+ settings (click the gear icon on the right edge of the black Google toolbar, choose “Google+ settings), and you’ll notice the first item is now “Who can send you notifications?”

The default is “Extended circles,” which means everyone in your circles (your contacts) and all their friends, but you can scale it back to “Your circles,” or even a few hand-picked circles of people whose opinions you really want to know about, leaving the rest for when you next check into Google+. You’ll still get some errant notifications about people adding you to their circles; if you really, really want to limit your notifications, you can try this Chrome extension for notification blocking.

Let your Google+ contacts use their own procrastination time to pick out great YouTube clips. Log into your Google account, head to YouTube, then click your profile name in the upper-right corner and choose “Settings.” Under the “Sharing” menu, click to connect Google+. Now give it a little time, and when you head back to YouTube, you can peruse all the videos your friends, coworkers, and others have been sharing through Google+ in a playlist, without having to hunt them down. You can comment on the posts they came from and give them a “+1,” too, without having to keep two browser tabs open.

One of Twitter’s quiet strengths is its ability to serve as a What’s Happening Now monitor, through both the community use of hash tags (like “#occupywallstreet”) and through its real-time, as-they-show-up search results. Google+ picked up both those abilities in an update last week, making Google+ a whole lot more useful as a tool for gathering news and monitoring opinion.

It’s also strange to think that a company whose core technology is search, launched Google+ without a search function, but it seems they’ve taken some time to get it just right.

Share: Four things Google Plus changed while you weren’t looking
By Kevin Purdy
Kevin Purdy is a freelance writer, a former editor at Lifehacker.com, and the author of The Complete Android Guide.