Pure Digital Technologies latest entrant into the world of pocket-sized camcorders, the Flip Mino, is light, easy to use and a seemingly perfect gift from geeks to grandmas. Mandy Wolf Detwiler explains why in this 2008 Geek Gift review. 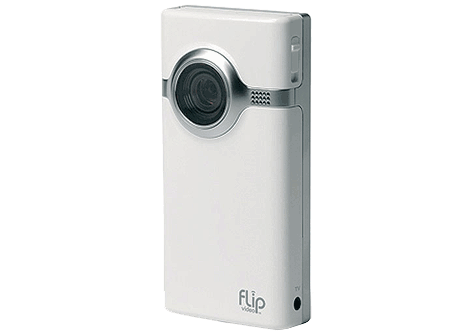 Weighing in at just a bit more than three ounces, Pure Digital Technologies latest entrant into the world of pocket-sized camcorders is light, easy to use and a seemingly perfect gift for anyone from geeks to grandmas. But how does the product really stand up against more traditional video cameras? In my opinion, it’ll do — and do pretty well. If you’re looking for production-quality clips to wow the film critics, this isn’t it; however, if you want to shoot a quick video of office hijinks, film an easy video tutorial, or just shoot your kids at the zoo, you’ll find fewer products easier to use than the palm-sized, attractively priced Flip Mino.

First, the ability to customize the Mino through the company’s Web store provides a treasure trove of options beyond solid color casings and that makes it a unique gift. Customizable cases may be printed in conjunction with CafePress (actually screen-printed on versus the less attractive secondary market skins), and the company even allows you to upload your own photo, say of your dog or a screenshot of your favorite World of Warcraft toon; however, if you’re old-school and would rather stick to black or white, those are readily available on the mass market.

Pure Digital has done what many hardware companies haven’t taken into consideration — the Flip Mino comes with a half-charged battery, making it immediately useable without the requisite full-charge-before-first-use seen on most gadgets (USB charge takes about three hours; cut that to two using the AC power adaptor — not included). A timer on the display screen counts down the time left, as well as how much video you’ve recorded. One-touch recording, easy deleting and, with a quick “flip” of a lever, the built-in USB connector makes connection to a computer easy.

When it comes to video quality, the Mino has a fixed focus lens (1m to infinity) with an f/2.4 aperture. The 1/4-inch VGA CMOS sensor delivers video at a 640 x 480 resolution at 30 frames per second and an average bit rate of 4.0Mbps. The Mino uses the Pure Digital Video Engine 2.5 for video compression and files are saved in Advanced Profile MPEG-4 AVI format. The result is a good quality picture that far exceeds those readily available on most cell phones and Web cams.

While you can watch your videos on the 1.5-inch display or plug the camera directly into your television using the included RCA cables, the camera’s true purpose lies in snapping quick clips for posting on Web sites or editing into larger videos.

There are two ways to pull clips off the device. When you connect the Mino to a computer, the built-in FlipShare software loads onto the computer and allows minor editing. The ability to mix video with music — either pulled from your own library or using the rather obscure playlist provided by the Mino — is geared more toward consumer use than more professional video editing. Still, it is a nice touch. I found FlipShare easy to use but its editing capabilities are rudimentary compared to other video editors. If you’re looking for a more hardcore editing experience, however, you can pull the individual AVI files and create films using a number of more complete programs such as Mac iMovie, Windows Movie Maker or Final Cut Pro.

Accessories such as a small tripod mount, AC power adaptor, action mount and cases are available and sold separately. The Mino does include a thin moleskin-like pouch and a wrist cord.

Pure Digital Technologies’ customer service seems to be first-rate; my custom Flip Mino arrived within three days when ordered directly through the http://www.theflip.com Web site; however, there was an annoying blown pixel that showed green on the display screen. I shipped it back within a week and the company provided an open case record, usually responding to my personal updates within a few hours. To date, I have not received a repaired or new unit, but the customer service rep said it would take about a week.

First, there’s no AC power charger included. What happens if you’re on the road and not toting a laptop?

A bigger threat to the Flip Mino’s lifespan is the fact that when plugged into a USB port, it hangs precariously off the front or side of a computer. That means if your case sits on the floor, you’re apt to accidentally kick it. It also puts additional stress on the USB port itself.

As for light sensitivity, the Mino’s specifications indicate >2.0V/lux-sec with automatic low light detection. Filming strobe and lazer lights on a house on Halloween proves that the Flip Mino holds its own, but under a single street light — not so much.

Finally, the 2x digital zoom is adequate, but don’t plan on getting crystal clear close ups, especially if you’re not using a tripod. Thus, you’re going to need to be close to what you’re filming. Have you spotted a chupacabra 100 yards away? Yeah, don’t count on being the next YouTube sensation.

The Flip Mino is a great gadget that isn’t likely to end up in your junk drawer. Purge Digital Technologies has created what is essentially the iPod of camcorders. With an MSRP of $179.99 (although some mass market retailers may offer the standard black or white units at around $150), it’s no wonder the Flip Mino is showing up as one of the season’s hottest geek gifts. The benefits far outweigh the faults, and through personal experience I can easily recommend the Flip Mino for just about anyone on your list this season.