Geek Gifts 2008: Get the power to game with the Alienware 51 m15x notebook

The Area 51 m15x notebook is latest in a long line of quality portable computers from boutique manufacturer Alienware. The m15x is also one of the most powerful notebook computers we have ever had the pleasure to review.

Even though it is now part of Dell Computers, I am still a big fan of Alienware Systems and the computers they make for the enthusiast/gamer niche market. The Area 51 m15x is one of their latest offerings in the popular notebook line of PCs. The m15x has a lot of firepower under the hood and will give most desktops a run for their money when the measurement in question is performance.

Of course, when we get a PC or piece of equipment exuding this much sexy geeky goodness, we just have to make a Cracking Open Photo Gallery out of it.

First, let’s get the specifications out of the way. The m15x does not skimp on high-performance parts that is for sure:

Besides all of the goodness on the inside, the Alienware Area 51 m15x is stylish on the outside. It is a bit less ostentatious than the m9700 notebook we reviewed last year, but is still impressive looking. To decrease the weight, Alienware opted to make the case for the m15x out of plastic which makes less imposing to the touch, but it still feels solid.

The hinges and ports are sturdy and display little give when you close the lid or you plug in a peripheral. The touchpad is large and responsive and is turns itself off automatically when another pointing device is attached. Overall, the construction on the Alienware Area 51 m15x is solid and I can find very little to complain about except for the fact that it weighs seven pounds. This is not really a notebook you can place on your lap comfortably and is probably too bulky to lug casually to the local WiFi hotspot for a cup of coffee.

As you would expect, the performance of the m15x is top notch. It is not likely you will find a higher performing notebook in the 15 inch form factor anywhere. Using standard 3DMark06 benchmarks, the m15x (Figure A) compares favorably to a desktop quad core machine with two nVidia 8800 GTS video cards in SLI mode (Figure B). 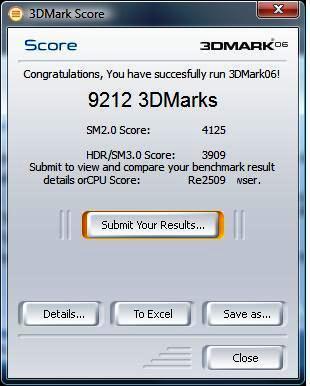 Besides the raw performance scores, the m15x has another thing going for it — HDMI out. With the installed GeForce 8800M GTX video card you can send a high-definition digital signal to a large-screen television up to 1080p. Seeing World of Warcraft or Crysis on a 42-inch LCD is a delight. The experience immediately had me checking for sales on a new high-definition capable LCD monitor.

The built-in LCD monitor is no slouch either with its maximum resolution at 1920 X 1200. Such a clear, crisp video experience is hard to let go of — I’ll be sad when I have to send this unit back.

The HDMI cable also sends digital sound, which means you can get 7.1 High Definition Sound from your m15x. Coupled with a Blu-Ray player/writer you have the makings of a very solid home theater system in a portable notebook.

One bit of lavishness is the LED lighting scheme. Alienware has included software that allows you to change color of any or all of the LED lights that outline the LCD screen, keyboard, touch pad, and control keys. Because the keyboard is illuminated, the m15x is great for playing games in low light conditions — a preference of mine.

The Smart Bay is a nice added touch. You can swap out the Blu-Ray optical drive for an optional additional battery or a second hard drive.

But even though there is so much to like about the Alienware m15x notebook there are a few minor points that annoy and disappoint.

The most glaring problem with this notebook (and this is not limited to just the m15x) is the battery life. You might be able to get two useable hours out of the notebook if you are not pushing performance. In fact, trying to play any game where advanced graphics are needed is almost impossible when the unit is not plugged into an electrical outlet.

There is also the problem of size and weight. While the form factor is of the 15-inch monitor variety, the m15x has plenty of heft. The notebook is not your typical small notebook by any stretch of the imagination. It is not the kind of notebook you take on a plane to get some work done on a cross-country flight. This is a gaming notebook, which essentially means it is portable station-to-station. The m15x makes for a very capable LAN party machine.

The other quibble with the Alienware m15x involves the controls above the keyboard. You control the volume, turn on or off the wireless, etc. with touch controls. The idea is that you just have to pass your finger over the control to make it operate. There is no tactile feel, only cool LED lights. This sounds cool I suppose on paper, but in practice it is more frustrating than practical.

The Alienware Area 51 m15x is a great gaming notebook. It has the performance to handle any game you can throw at it. A few minor quibbles aside, there are really no noteworthy problems with this notebook. Well, except perhaps for two points.

One, this is a gaming notebook. While it can certainly handle spreadsheets and presentations, it is not really designed for that and there are many better choices for those applications. Two, the m15x is very expensive at over $5000 for the reviewed configuration.

So if you are a gamer in need of a new portable gaming machine, this is likely the one you want, depending on your ability to afford it. If you are a road warrior, who likes to play games in the hotel room after making sales calls all day, you might be able to justify this machine, but it would be a stretch.

The Alienware Area 51 m15x is a great piece of portable gaming equipment, but it serves a niche market for gamer/enthusiasts — the rest of us are just envious.

Delivered Weekdays
Sign up today
Share: Geek Gifts 2008: Get the power to game with the Alienware 51 m15x notebook
By Mark W. Kaelin
Mark W. Kaelin has been writing and editing stories about the information technology industry, gadgets, finance, accounting, and tech-life for more than 25 years. Most recently, he has been a regular contributor to BreakingModern.com, aNewDomain.net, and TechRepublic.com.