Since the introduction of the genre with Wolfenstein 3D, the first person shooter has been a popularity chart-buster, recording sales in the billions across just about every platform. TN Games believes it has found a way to make the first-person experience even more immersive with its FPS Gaming Vest. 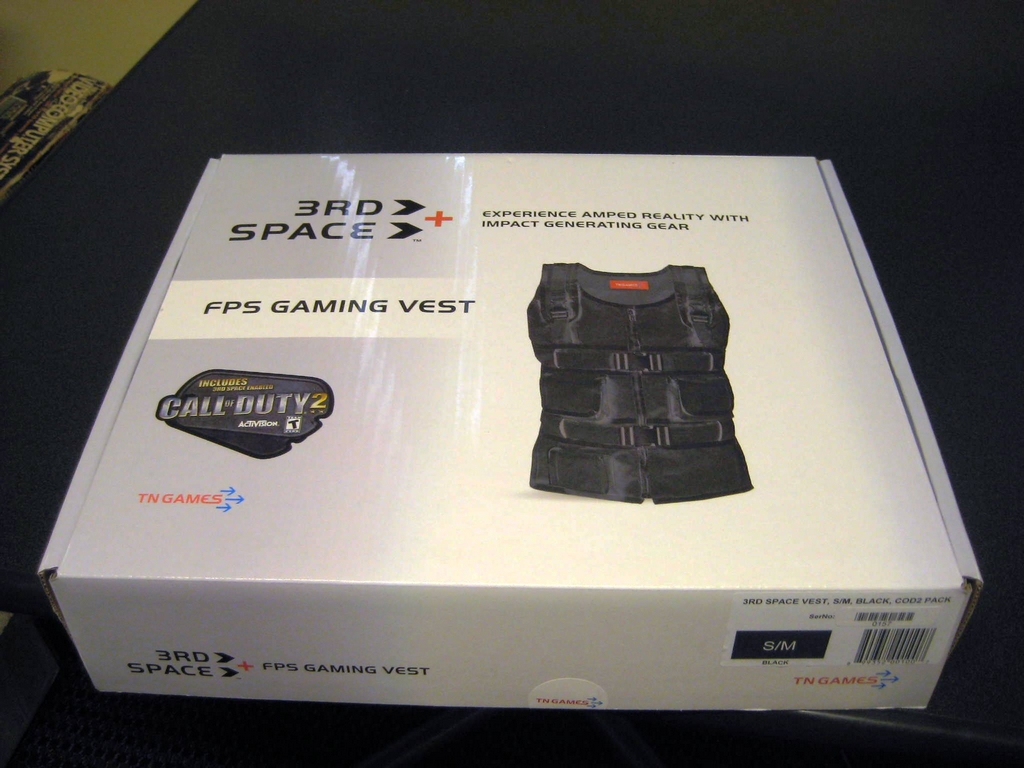 First person shooters (FPS) are commonplace these days, with FPS titles for just about every platform taking up shelf space at Best Buy and Circuit City. FPS games are big business; so big, in fact, that even the worst of the genre tend to sell well.

In the continuing effort to become the next big thing, game peripheral developers have been searching for ways to make the FPS experience even more immersive with everything from 3D image systems, to surround-sound headphones, to large curved video displays. TN Games is marketing a new device in this line of enhanced FPS game play called the FPS Gaming Vest.

To get a good look at the FPS Gaming Vest check out this TechRepublic First Look Photo Gallery.

The FPS Gaming Vest looks sort of like a military vest, at least as they are often depicted in movies. You know the vests I mean, no sleeves, lots of pockets, probably with camouflage. Think Arnold Schwarzenegger and the movie Predator.

The FPS Gaming Vest is connected to an air compressor which in turn depicts enemy fire by inflating pressure points in the vest tied to the direction from which you are being attacked. At least that is the idea in theory. I have yet to get it to work at all with Crysis. The FPS Gaming Vest ships with a version of Call of Duty 2 that is specifically designed to support it, but that game does not run on the Windows Vista system we have. (I will keep trying — it has to work with something.)

But even though I couldn’t get the vest to work I have come to the conclusion that, even if it worked perfectly, I would hate it. The FPS Gaming Vest is loud, a pain to get on and to get to fit right, it is bulky, requires the management of several different wires and tubes, and makes the person wearing it look like a complete dork. (Believe me; I don’t need help in that area.)

The idea that I am going to jump through all of the hoops necessary to strap the vest on so I can play a FPS game is beyond ludicrous. Wearing the vest ties you to your computer physically to the point where extricating yourself in a timely manner to the answer the phone is next to impossible.

But beyond that, getting a little poke in the back when being shot at in game does not enhance the game play; at least not enough to make the effort of getting the FPS Gaming Vest on in the first place, worth the trouble. Not to mention how much leaving this vest, with all the tubes and wires hanging off of it, hanging on a chair waiting for your next play session would annoy your spouse or roommates.

The FPS Gaming Vest is one of those novelty gadgets that you would use once or twice, but at some point you would put it in the closet and never use it again. The supposed benefits of the vest are greatly outweighed by the annoyance created by actually using it. My advice is to save your money ($169) for a better mouse or a nice pair of headphones.

Delivered Weekdays
Sign up today
Share: Geek Gifts 2008: The 3rd Space FPS Gaming Vest
By Mark W. Kaelin
Mark W. Kaelin has been writing and editing stories about the information technology industry, gadgets, finance, accounting, and tech-life for more than 25 years. Most recently, he has been a regular contributor to BreakingModern.com, aNewDomain.net, and TechRepublic.com.