Ultraportable netbooks are very popular in 2008, but do they measure up to the hype? Mark Kaelin thinks one actually does. Check out his review of the Acer Aspire One netbook. 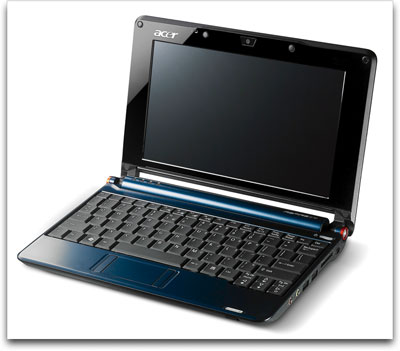 Among other things, 2008 can be called the year the ultraportable netbook computer became more than just a marketing buzz word. Just about every major manufacturer (and many minor ones) has a netbook computer in their product line. The problem is that not all netbooks are as functional as others.

By their very nature, a netbook has to compromise some aspect of typical notebook computer functionality in order to get to the small footprint that defines the niche. What is compromised is often the deciding factor on whether that particular netbook passes muster as a useable computer or remains a novel idea yet to be realized.

The Acer Aspire One netbook is the one notebook I have seen so far that actually meets my definition of a useable computer. The Aspire One has the telltale small footprint, but it is not too small like the Dell Mini. It is sturdy and feels solid, but not bulky like the 2Go Classmate PC. Acer has done a good job of blending small with power to create a netbook computer that one could actually take on the road and get real work done.

Even though the Acer Aspire One is a netbook, it does not skimp on power when compared to the general notebook market:

The Acer Aspire One is slightly wider than the 2Go PC and the Dell Mini which allows it to have a larger keyboard. This small increase in width is important because it allows for near normal typing, which makes answering e-mails and other writing functions definitely more efficient.

Another plus for the Aspire One is the 160GB hard drive. Many netbooks are using solid state drives to save power, which is understandable and a great idea, but the size of those drives is way too small for a true workhorse computer. With 160GB hard drive you can load an office suite, a custom application or two, and still have room for some MP3s.

The other great feature that I want to highlight is the extended battery life with the optional 6-cell battery. Being able to work over five hours without worrying about a recharge or finding an outlet is liberating. This one feature puts the Acer Aspire One head and shoulders above the competition that we have seen so far.

All of these distinguishing features come in a netbook that is running the power Intel Atom CPU running at a respectable 1.6GHz. This is a real computer operating at real-world computing speeds — only in a very small package.

Personally, I’d be willing to forfeit the camera in exchange for a more typical resolution. At 1024 X 600, you find yourself spending an inordinate amount of time moving and resizing windows. This may seem like a minor thing at first, but it is amazing how frustrating it can get, especially when you are in a hurry.

The only other part of the Acer Aspire One that I would like to see improved is the touchpad and mouse-click buttons. The touchpad is a little sluggish, particularly when you try to use the scrolling functions. And the mouse-click buttons are mounted on the sides of the touchpad instead of below it has is typical for notebooks. Moving your finger to the side to left-click an icon goes against the normal move to the bottom I, and so many of us, have become accustomed to. I don’t see the benefit of the design at all and I would like to see it corrected with the next iteration of the Aspire One.

The netbook form factor is the hot notebook niche right now and manufacturers are making concerted efforts to fill this market niche. While I have seen several decent netbook computers so far, the Acer Aspire One is the only one of the bunch that measures up as a viable PC to take on the road. The specifications are powerful enough for every day computing, but are housed in a very small package. Acer has engineered a find netbook PC, one that I can see myself using to actually get some work done. It will be a pleasure to Crack it Open in the near future.

Share: Geek Gifts 2008: The Acer Aspire One netbook
By Mark W. Kaelin
Mark W. Kaelin has been writing and editing stories about the information technology industry, gadgets, finance, accounting, and tech-life for more than 25 years. Most recently, he has been a regular contributor to BreakingModern.com, aNewDomain.net, and TechRepublic.com.