Think Geek sent us the RC Battle Tank Type 90 to review for our annual Geek Gift Guide. We took our battle tank for a little field testing and came away more than a little disappointed.

At the risk of revealing my age again, I missed the radio controlled toy craze. My toys relied on gravity and kinetics for their movement. I would love to have my SSP Laker Special again — now that is a cool Geek Gift. But I must admit, radio controlled vehicles are pretty darn cool too.

And so, I was filled with great anticipation when I was given the assignment to test and review the RC Battle Tank Type 90. An appreciative shout-out goes to Think Geek for sending us one of these for the review. Alas, though, after mere minutes of opening the box I was gravely disappointed.

I guess we should have known what we were in for since there is no company name to be found anywhere on the box or in the documentation.

After removing the Battle Tank from the box one of the first things you notice is that our tank is really a 1/24 size sort of replica of a U.S. M1 Abrams tank. The strange thing is that no where on the box or in the sparse documentation does it say that — makes me think that the U.S. military declined to grant the manufacturer, whomever that may be, a license to use any official language in their descriptions.

The second thing you notice is that the Battle Tank is cheap, cheap, cheap. The materials are cheap, the construction is cheap, and the electronics are cheap. Even the batteries are some cheap off-brand. For something with a strong name like “Battle Tank,” it sure is one flimsy toy. For example as I was putting in the battery pack in the bottom of the tank, the hatch door on top of the tank broke off. And I don’t mean it got knocked off — it literally broke at the hinges. Cheap!

The motors inside the tanks seemed to be quite powerful, (we’ll find out when we crack it open) but I think they are too powerful for the way the tank was constructed. I took our tank outside for a spin and the gearing on the drive shaft for one of the treads broke. The entire gear was stripped of its spines — all I did was drive it about 10 feet.

The radio control unit is shaped like a handle and is easy to use, but it too is made very cheaply. The buttons feel fragile and I am sure they will eventually break from just normal use. And heaven-forbid you should drop it — I doubt it would survive the fall intact.

The air-cannon shoots plastic BBs with a range of around 20-feet. That definitely puts the cannon in the “not for little kids” category. The projectiles leave the tank with enough velocity to do damage to soft tissue like an eye. The BBs are also small, which means that they are difficult to find once they are fired from the tank, which also makes them prime size for little children to swallow.

The whole experience with this Battle Tank was plain disappointing. 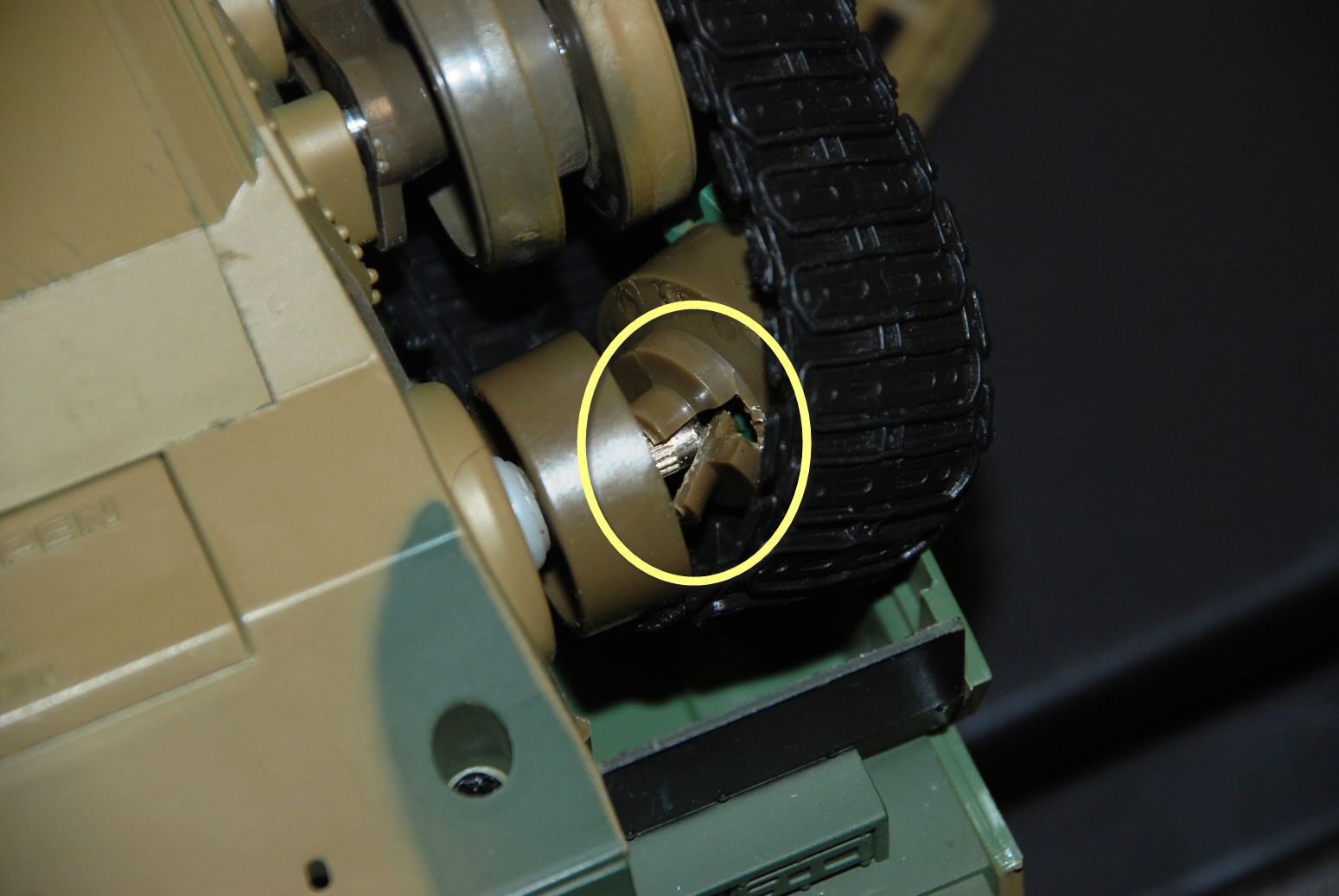 I can think of no better way to sum up my review of the RC Battle Tank Type 90 than CHEAP! Everything about it is cheap with very little to redeem it. While the tank is obviously not designed for children and the rough play they would put it through, it is hardly suited for adult collectors or hobbyists since it has almost no value as a replica of the real thing. The whole thing has the aura of a quick way to bilk $40 out of an unsuspecting consumer.

Delivered Weekdays
Sign up today
Share: Geek Gifts 2008: The RC Battle Tank Type 90
By Mark W. Kaelin
Mark W. Kaelin has been writing and editing stories about the information technology industry, gadgets, finance, accounting, and tech-life for more than 25 years. Most recently, he has been a regular contributor to BreakingModern.com, aNewDomain.net, and TechRepublic.com.