Star Wars fans, do you need The Complete Saga Blu-Ray Collection? Jay Garmon answers this question in his review.

This is it, Star Wars fans, the latest edit of all six Star Wars movies, in full Blu-Ray high definition and surround sound, with three bonus disks containing over 40 hours of deleted scenes, interviews, and extras. So the question becomes: Do you need it? My answer is: Maybe. 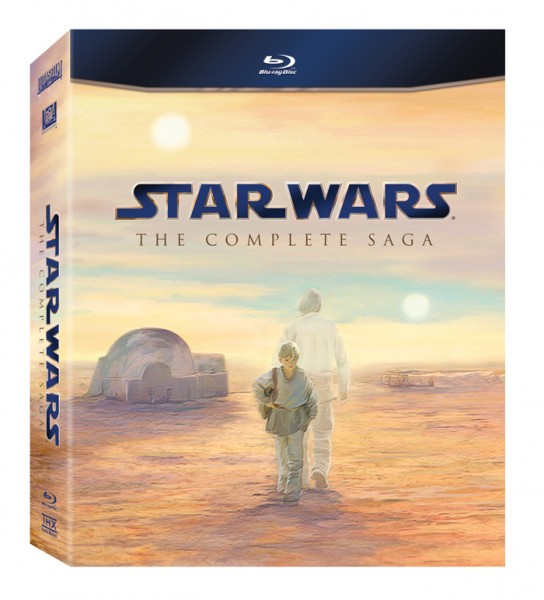 It really comes down to this: Are you a Star Wars purist, or a Star Wars completist? Purists despise the constant tinkering Lucas has inflicted on the original Star Wars trilogy (though most don’t realize this tinkering has been going on since 1977). Completists simply want to own every possible incarnation and version of Star Wars they can get their hands on. Most of us fall somewhere in the middle on this spectrum, though we all tend to favor one side or the other.

I had a group of about 10 absolute Star Wars fanatics over to my house for two consecutive weekends while we churned through the Star Wars: The Complete Saga Blu-Ray Collection. At the end of the day, it was still Star Wars, and we had as much fun mocking some of the new changes as we did reciting the classic lines that not even Lucas dares alter. If you don’t own a complete set of Star Wars movies on DVD — and you aren’t a diehard purist — there’s no reason not to make this your go-to copy of each film. If you’ve got DVD copies of the Star Wars double-trilogy, the upgrade to Blu-Ray isn’t significant enough to warrant a replacement — unless you’re a completist, in which case you need this set yesterday.

Delivered Weekdays
Sign up today
Share: Geek Gifts 2011: Star Wars: The Complete Saga Blu-Ray Collection
By Jay Garmon
The Trivia Geek, known to some by the mysterious alias "Jay Garmon," is an online community entrepreneur trying his luck with some promising Internet startups. To get the real skinny on his wacky business ideas--and his amateurish sci-fi short stories--read his blog, JayGarmon.net. It's like Jay without editorial oversight or decent engineering support. \ \ Jay is also the diabolical mind behind TechRepublic's Geek Trivia newsletter, a former contributing editor of TR's Geekend blog, and until March of 2008 was a project manager for TR site feature development. \ \ In a previous life (read: fresh out of college), he was an ad man, toiling away for low pay and less respect as a copywriter and producer of print ads, radio spots, and TV commercials. No, you've probably never seen his work. Be thankful. \ \ Between his ad days and his life as a TechRepublicist, he worked briefly as a Web developer, mostly using (shudder) FrontPage and SQL Server to build rickety and poorly conceived database-driven Web sites. He was self-taught, and it showed. He's also dabbled in proposal writing, though he wouldn't recommend that as a career choice. \ \ Today, when he's not trying to build the next Internet media giant, Jay reads some comic books, plays tabletop RPGs, helps run a local sci-fi con, tries to launch a career as a fiction author, watches a lot of sports, and keeps his wife and daughter happy. The last part is easiest.