Jack Wallen takes another look at the GNOME 3 desktop and is surprised at what he finds. A desktop that is the target of much derision might deserve another chance.

GNOME 3: A desktop that brings a certain level of ire to the hearts and minds of many a Linux user. When this desktop first arrived, my opinion was fairly high. Why? It was new, fresh, and seemed like it could easily take the desktop world by storm. But then the developers stopped listening to the users and things seemed to fall apart.

It’s been a while, since last I condemned the GNOME 3 desktop to obscurity, so I thought I needed to revisit the topic and give the one-time king of the open source desktop another chance. Believe it or not, I was quite pleasantly surprised at what I found.

I’ve made it abundantly clear, I’m a fan of Ubuntu Unity. It’s a refreshing change that actually can help make desktop computing far more efficient. Unity and GNOME 3 hold a number of similarities, but just enough differences to set them very much apart.

I installed GNOME 3 on two very different machines. Both machines were running Ubuntu 12.10. The first machine was a low-end desktop that would bog down after a given period (using Unity). The laptop, on the other hand, had plenty of power to run either.

Take into consideration, I had been using Unity for quite some time — so I was incredibly comfortable with the design and the change. I had also previously used GNOME 3, which means the environment wasn’t a complete unknown.

Installation was quite simple:

I made sure to retain the LightDM login manager (as I preferred that to GDM). That was it. I was ready to revisit the land of GNOME, flavored 3.6.

If you are a user of Unity — there’s very little to report. Here’s what GNOME 3 has: 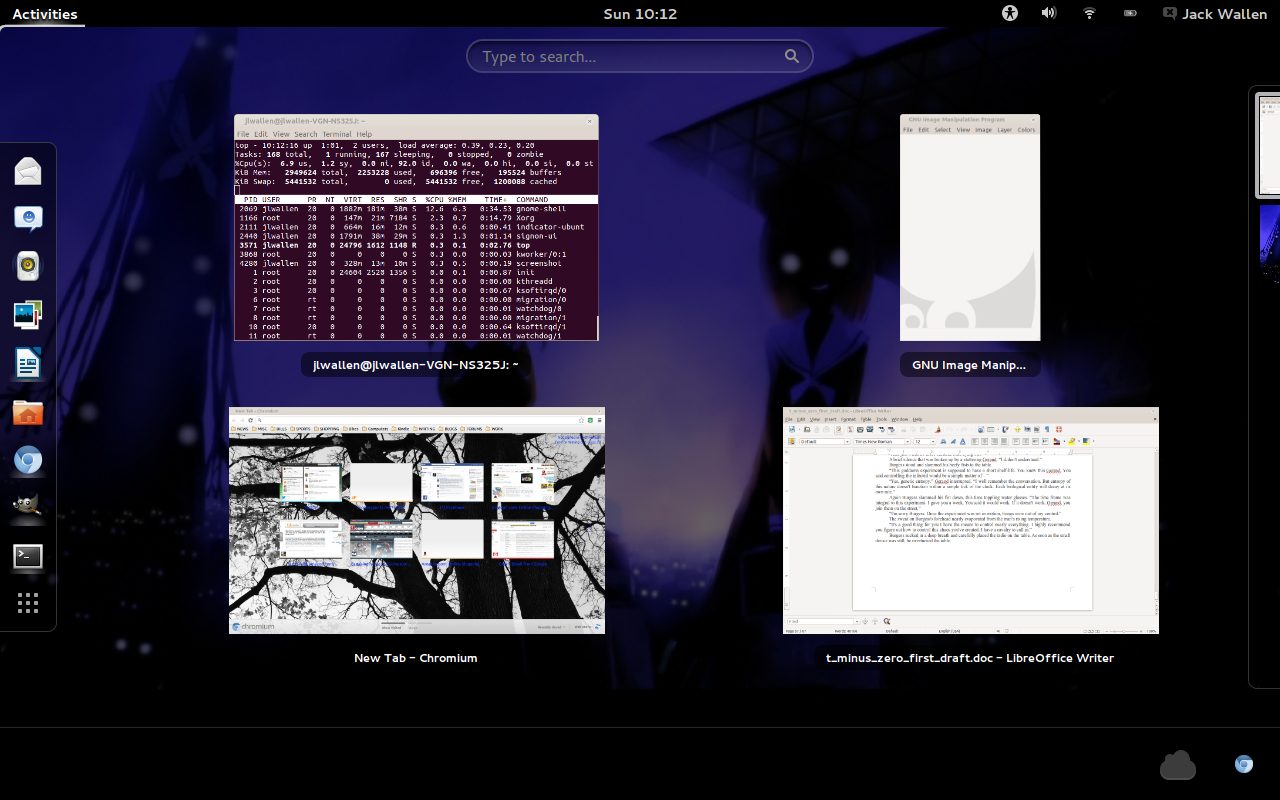 What GNOME 3 does not have (in reference to Ubuntu Unity):

Now, if you look at the above list, you might see somewhat of a theme. Minus the always-visible launcher, the two things GNOME 3 does NOT have are the two things many Unity users gripe about the most. There has been a big stink about the web-integrated search for some time, and the HUD (which I happen to really like) gives many people more of a headACHE than a headUP.

As far as performance is concerned, I have to say that GNOME 3 wins hands down. I have a feeling this is due to Unity still relying on Compiz; whereas, GNOME 3 uses Mutter. The performance gains with Mutter are noticeable. Not only are the effects cleaner, the transitions are smoother.

After using GNOME 3 as my primary desktop for a week, I just can’t figure out why everyone is so up in arms about this desktop. I understand the majority of users do not like change. But change is inevitable. And with the enormously popular mobile platforms, users have started growing accustomed to various interface metaphors.

My fear is that this push backwards to GNOME 2 will be yet another factor keeping Linux on the desktop. Let me explain. When I first started using Linux (back in ’96) I was put off by how out of date the interface looked. It wasn’t until I discovered AfterStep that I realized I could have the power of Linux, yet have a sexy desktop interface. It was important to me then and it’s important to consumers now. If Linux is going to achieve any success with the modern desktop user, it has to advance. Both Unity and GNOME 3 are doing just that. Both are solid interfaces that help to focus the user (in a modern-looking manner) on the work — not the interface.

After this week-long experiment, I came up shrugging. I simply can’t figure out why the ire is focused so strongly on GNOME 3. GNOME, KDE, and Unity are doing everything they can to modernize the Linux desktop — and I applaud them for their efforts. All three desktops have done a great job of making Linux not only more user-friendly, but surpassing the innovation and look of any other desktop.

I also am fully aware that there are many people out there who simply do not want to let go of the familiar and the simple. I don’t blame them for that — and I think Linux is the perfect place for them. For anyone that shrugs off change, Linux will always offer the ability to maintain what you know and what works best for you.

But for the future, and future generations of Linux users, GNOME 3 (Unity and KDE) is the desktop. I would entreat each and every Linux-friendly reader out there to install the latest GNOME 3 and give it a try. It’s come a long way from the beginnings of the third major iteration — you might be surprised at how much you can get done (and enjoy working with) this desktop.

Share: GNOME 3: A new perspective
By Jack Wallen
Jack Wallen is an award-winning writer for TechRepublic, The New Stack, and Linux New Media. He's covered a variety of topics for over twenty years and is an avid promoter of open source. For more news about Jack Wallen, visit his website jackwallen.com.