Republicans trounced Democrats in a scorecard of key technology votes compiled by CNET News.com that illuminates stark differences in the two parties’ voting history in the U.S. Congress over nearly a decade.

Senate Republicans scored an average of 61 percent–15 points higher than their Democratic counterparts, who on average scored 46 percent. The gap was mirrored in the ratings garnered by their counterparts in the U.S. House of Representatives, where Republicans boast a 68 percent collective score compared with 52 percent for Democrats. 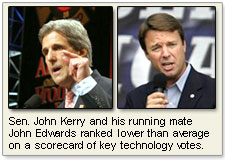 Of the 25 most tech-friendly members of the House, 19 are Republicans. (The Senate scorecard can be found here, and the House version is here).

Sen. John Kerry, the Democratic presidential candidate, scored in the bottom half of senators with a lifetime voting rating of 44 percent–thanks in part to his votes on Internet taxes and the Digital Millennium Copyright Act. On average, U.S. senators received a score of 53 percent.

Don’t know who’s representing you in Congress? You’re not alone. Fortunately, the FirstGov portal links to some useful information, and the House.gov site permits searching based on your home zip code. Many states, like California and Washington, have similar services for state legislators–though our scorecard rates only federal officials.

House seats are up for re-election in every even-numbered year, and about a third of the Senate is up for grabs at the same time. The perhaps poorly named Issues2002.org site lists the 34 senators who want your vote on Nov. 2, and the U.S. State Department provides some useful background on the process.

If you’re not fond of how your local politicians voted, let ’em know. Once you’ve found your congressional district from the links above, the Federal Election Commission’s search tool will identify their opponents–and show you how much money each has raised.

Kerry’s running mate, John Edwards of North Carolina, was in office long enough to vote on only six of the 10 technology-related bills in the Senate that were ranked in the scorecard. Edwards’ rating is 50 percent.

Because the scorecard was limited to congressional votes, neither President Bush nor Vice President Dick Cheney was ranked.

When assembling the scorecard, CNET News.com reviewed important technology bills and selected representative ones ranging from a 1995 vote on the Communications Decency Act to a recent attempt to preserve the current practice of accounting for the cost of stock options. The selection process also solicited input from technology trade associations on key legislative actions over the past decade.

Senators were ranked against 10 key votes over the past 10 years, with scores assigned based on CNET News.com’s editorial judgment of the impact of those votes on the technology community at large. A full explanation of the methodology for Senate scores can be found here.

Representatives were similarly ranked against 12 key votes over the past six years. A full explanation of the methodology for House scores can be found here.

One reason why Republicans garnered better scores is that nearly 40 percent of the included votes dealt with taxes and free trade, two topics that tend to break along partisan lines. Trade is especially vital for technology firms; the Information Technology Industry Council says exports represent more than half the revenue of its larger members.

Will Rodger, who tracks Congress for the Computer and Communications Industry Association, said the scorecard’s results show that politicians who tout themselves as tech-friendly don’t always vote that way. “A lot of our best friends don’t really capitalize on their votes,” Rodger said. “There are still lots of relationships that tech proponents could cultivate on the Hill.”

How the rankings worked
Any political scorecard is necessarily incomplete and somewhat arbitrary. In this case, the majority of technology-related votes aren’t suitable for ranking. That’s because some decisions, like an October 2001 one on the Internet Tax Nondiscrimination Act, took place by voice vote with no record of how individual members of Congress behaved.

Others, like a computer security bill, slipped through Congress by unanimous consent without any record of which politicians were present or not. Another category not included are decisions, like an 87-0 vote on electronic signatures, that wouldn’t help to differentiate some politicians from others.

Robert Atkinson, a vice president at the Democratic Party-affiliated Progressive Policy Institute, warned that scorecards are only partial measures of how tech-friendly a politician is. “Just having a score here that might be below average does not necessarily mean that a member is (against) e-commerce and Internet growth,” Atkinson said. “There might be other measures that don’t get to the floor or that are in appropriations bills that would demonstrate a member’s commitment to the IT economy.”

Another set of votes not represented in the scorecard is the list of bills that were approved by committees but never made their way to the House or Senate floor. Legislation approved by the House Armed Services Committee that would have granted the Pentagon a veto over certain exports falls into that category.

The senator with the poorest voting record, a mere 11 percent, is Ernest “Fritz” Hollings, D-S.C., a longtime adversary of the technology industry who once was the chairman of the powerful Senate Commerce Committee. Hollings, who is , outraged hardware and software companies by proposing to implant copy-protection technology in their products. Hailing from a state proud of its textile industry, Hollings also consistently voted against free trade.

A spokeswoman from Hollings’ office declined to comment on the rankings.

Jim Bunning, a Kentucky Republican, can claim the highest Senate score: a hefty 86 percent. Bunning is a former baseball pitcher (with stints for the Detroit Tigers, Philadelphia Phillies and Los Angeles Dodgers) elected in 1998. Bunning once savaged a political rival for backing NAFTA and normalized trade with China, but upped his own score by voting in favor of a free trade bill two years ago.

“I think it’s not surprising,” said James Gattuso, vice president of the conservative Heritage Foundation, about the partisan differences highlighted by the scorecard. “Republicans tend to support entrepreneurs a lot more than do Democrats on the whole…Despite all the exceptions we talk about, on the whole, the Internet wants to be left alone and the Republicans want to leave it alone.”

The top-scoring House member was Butch Otter, a Republican from Idaho, with an 88 percent lifetime rating. William Lipinski, a Democrat who represents the south side of Chicago, was the worst-scorer with a mere 11 percent. Lipinski is culturally conservative, which cost him ratings on bills related to free speech and gambling and anti-free trade–he’s opposed NAFTA, GATT and the tech-related trade bills on the scorecard. The overall House average is 60 percent.

Lipinski’s office did not immediately respond to a request for comment.

While the scorecard is intended to capture occasions on which politicians were forced to choose between the technology agenda and competing interests, sometimes that agenda is far from clear.

Take the Digital Millennium Copyright Act and its “anti-circumvention” restrictions, which have drawn fire from hardware makers and Internet providers including Sun Microsystems, Verizon Communications, SBC Communications, Qwest Communications, Gateway and BellSouth. But many trade associations, including the Microsoft-backed Business Software Alliance, would like to keep the current law intact.

Jonathan Zuck, head of the , said that while he generally agrees with the scorecard’s ratings, he’d “disagree” with the scoring that counts support of the DMCA as a negative.