There's a lot to explore in Windows Phone, and the integrated UI across multiple Windows platforms, the familiar tools, and SkyDrive are hard to beat.

My partner and I purchased Windows 8 Phones a few weeks ago from Telstra. We had to wait for the first delivery to our local Telstra store, and we were the first to purchase the phones there, with the assistance of a Telstra consultant who admitted, as an Android user, that he’d only studied them the night before. We had two choices: the Nokia 920 or the HTC Windows Phone 8x. We’d spent some time previously looking at the specifications for both phones, and felt that the Nokia won out on camera quality and Nokia Maps, but that there was little between them on paper. 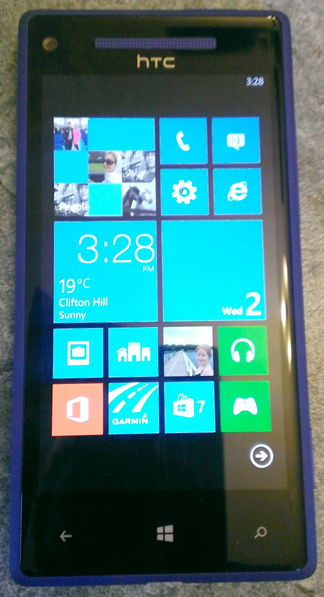 Once we actually handled the phones, there was no contest. We were replacing our HTC Mozart WP7 phones, and we had always liked their slim, light design — and while the HTC 8X is heavier than the Mozart, it is noticeably thinner and lighter than the Nokia, and the sculptured back felt comfortable in our hands.

Once the choice was made, we now had another option not available before: colour. While you may see a variety of colour choices for both the Nokia and HTC phones, Telstra had only two available: black and blue. My partner wanted a bright colour to allow her to “find the thing in my handbag”, and would have preferred yellow or red, but was happy with blue. The first delivery of phones to the shop contained only black, but our helpful consultant had one delivered from another store in 40 minutes, while I was happy to go with the black.

When we first requested a wider range of colours, the consultant suggested that we get a coloured case, and I must admit that I looked at him blankly. We’ve never used cases on our phones, and the plastic bodies have survived the very few times our phones have hit the floor. Cases make the phones bulkier, heavier, and harder to use or slip into a shirt or pants pocket, so I’ve never seen the need. Hopefully, a broader range of colours will be available in the future.

We’d used Zune software to make sure our WP7 phones had our data backed up to SkyDrive and PC, so simply starting our new phones and typing in our Windows ID and password automatically downloaded our current preferences and favourites, contacts, and calendars, and gave us access to SkyDrive. Windows Mail and Gmail were easy to set up, and even to my private Exchange server, which no longer requires a certificate (although I was warned of the dire consequences of using sites without trusted certificates).

One immediate advantage with Windows 8 Phone is that my phone now has a file system and acts as a USB drive — no more Zune connection software to download. Simply connecting the phone gives a pop-up menu. Selecting Move files will start the Windows Phone app to allow you to transfer files back and forth, and weed out any unwanted photos, videos, and music.

Selecting Open files will give you the desktop File Explorer view, and your phone will appear as a mobile device. You only have access to the Documents, Pictures, Music, Video, and Ringtones folders, but you may create new folders and transfer any type of file to the phone. I’m sure a lot of people will also welcome the Ringtones folder. Transferring any MP3 files to this folder will make them available as ringtones on the phone.

The Windows Phone 8 UI is familiar to Windows Phone 7 users, but now allows you to customise the size of the tiles to provide a more personalised start screen. If you’ve used Windows 8 on the desktop or on the Surface, all the familiar tiles, such as People, Pictures, Mail, Calendar, IE, Office, and Store, are there. The News app isn’t available, but Telstra One and HTC News are there, and a number of news aggregator apps are available on the Store. What I do miss are some of the new touch gestures in Windows 8, and I found myself trying to close an app by swiping down from the top of the screen, rather than using the Back button. I expect Windows Phone 8 to move toward similar touch UI gestures in the future.

While I know that Windows Phone 8 is a completely different OS from its predecessor using the NT kernel and sharing code from Windows 8, it feels more like an incremental update to an already polished design. It’s fast and fluid, and the HTC’s 1280×720 display resolution means that everything is clear and bright. While the camera may not be as good as the Nokia 920, the difference is marginal in my experience, and the dedicated camera button on both phones means that you don’t have to turn on the phone and search for an app for a quick photo.

The real advantage to Windows Phone 8 is having the same UI and tools as the desktop/laptop/tablet with SkyDrive integration. I can rough out an article on my desktop, do some polishing with the Surface in another location, and even do some last-minute fixes on my phone. My contacts, calendar, pictures, music, videos, and documents are available at any time on any device. The same applies to any work on the web using IE10.

I’m not really a heavy app user on the phone, but Flashlight provides a useful torch, and Wordament is my current massive multiplayer word game. Most Windows Store apps have a Try mode, so you can spend some time trying out a number of apps before you make a financial commitment. While the Store may be trailing the number of apps available from Apple, you’ll find most of the familiar mobile apps or acceptable substitutes.

I’ve yet to try the Garmin navigation app that’s provided “free” from Telstra, which is really only a trial mode until it can convince you to subscribe. I did try an app called GPS Turn by Turn, which seemed to work well, with a pleasant female voice that reminded me of my Prius.

My Windows RT Surface tablet is Wi-Fi only, so I was eager to try out the Internet Sharing feature of the 4G phone. Internet Sharing is available under Settings, and will support up to eight clients. Turn it on, and it will automatically provide a default name and password. This will only work with your phone’s data connection, and will turn off your Wi-Fi if you are currently using it. On the Windows Surface, it’s as simple as selecting the name from the list and putting in the password.

A quick trip to the Speedtest.net site revealed that I’m getting 25.9Mbps download and 17Mbps upload speeds, which is slightly less than my cable, at 28.6Mbps. I was also careful to switch off internet sharing again, as I only have a 1GB data plan. Plan worries aside, Internet Sharing means that I can take my Surface on the road and still get fast connection speeds, and only have to worry about one mobile data plan.

There’s a lot to explore in Windows Phone, and I’ve only really scratched the surface by using it as a consumer. However, the integrated UI across multiple platforms, familiar tools, and SkyDrive are hard to beat.

Share: Hands on with HTC’s Windows Phone 8X
By tonymcsherry
Tony is the owner and managing director of Microcraft eLearning and is one of the creators of the AUTHOR eLearning Development System.