How do I… Install and configure a DHCP server in Windows Server 2008?

DHCP is an invaluable service when you have a network larger than a handful of computers. Microsoft Windows Server 2008's built-in DHCP server allows Windows machines to obtain their IP addresses and network settings automatically, which can vastly simplify network configuration. Steven Warren describes how to install and configure a DHCP server in Windows Server 2008, and explores some of the advanced features DHCP has to offer.

Dynamic Host Configuration Protocol (DHCP) is an invaluable service when you have a network larger than a handful of computers. It’s also a standard component of enterprise networks and sub networks. Microsoft Windows Server 2008’s built-in DHCP server allows Windows machines (and any other TCP/IP-based machines and devices) to obtain their IP addresses and network settings automatically, which can vastly simplify network configuration. In this document, we’ll discuss how to install and configure a DHCP server in Windows Server 2008, and we’ll explore some of the advanced features DHCP has to offer.

Before you configure your DHCP server, it is a good idea to have all your ducks in a row. Prepare and have all the necessary information up front before sitting down and configuring your server. For example, you may need to know:

It is much easier to configure your DHCP server with this information in hand rather than scrambling for it at implementation time.

Installing a DHCP server in Windows 2008 is a snap. They created a very simple wizard that walks you through the entire process. Follow me on this journey.

To install a DHCP server from the Control Panel, follow these steps: 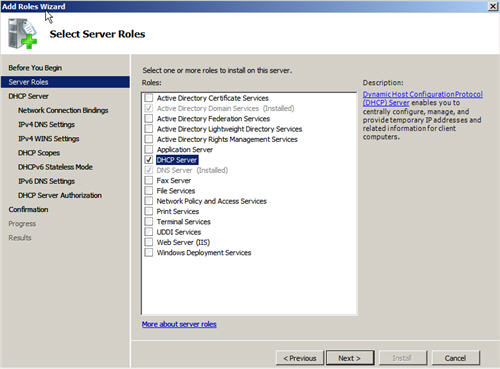 In the previous release of Windows, a wizard did not appear to walk you through creating a DHCP server. Windows Server 2008 has really simplified this process by allowing you to configure a DHCP server in roughly seven steps. Of course, you can still manage your DHCP server from the DHCP Microsoft Management Console (MMC) snap-in or delete and create scopes on the fly.

Let’s continue on through the wizard. Your network cards and static IP addresses are automatically detected and you can choose how DHCP will service clients on different subnets, as shown in Figure C. 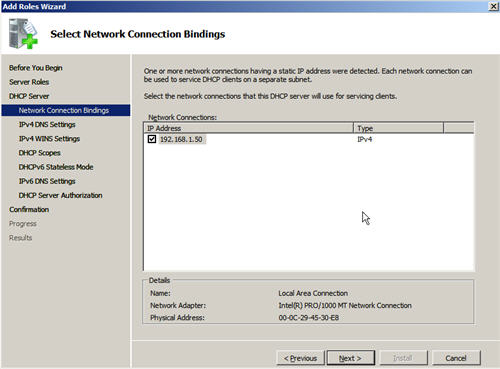 On the next window (Figure D), you can specify the applicable DNS server(s) to be used with DHCP when an address is assigned. Figure E displays where you would enter the applicable WINS servers if you require it on your network. 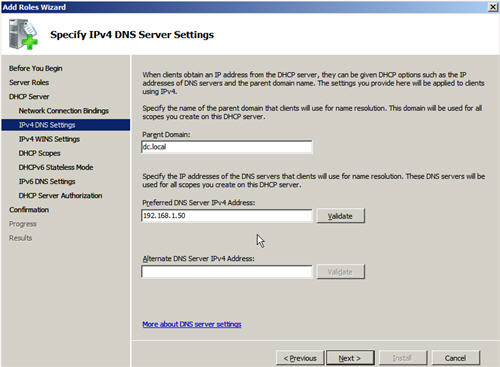 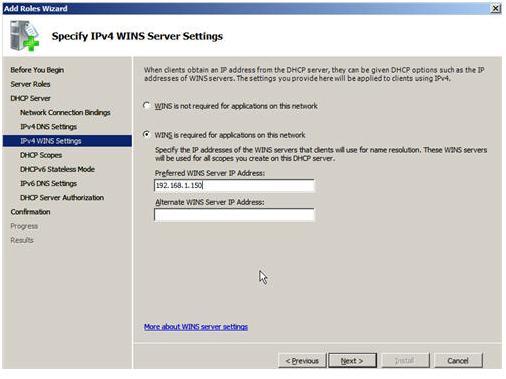 When you create a scope, you must select the range of IP addresses and you must specify the appropriate scope options to include. These options are what we were referring to above when we mentioned that you can assign other network information to your clients at the time they are given an IP address.

There are two types of scope options: Global and Scope. Global options are propagated to all the scopes that you create on that DHCP server, while Scope options are only for the individual scope that you are working with.

On the DHCP scope window, you will create your scope. Depending on the size of your network and the amount of users that will be assigned IP addresses, some thought must be given to the parameters of your scope selections. In my example (Figure F), I created a simple scope. 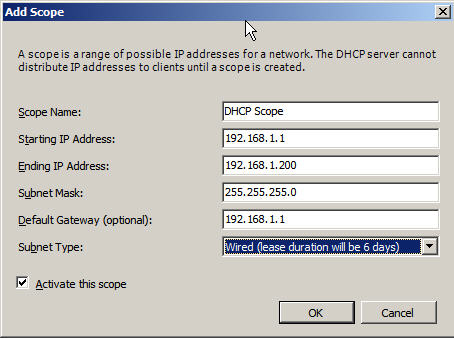 The subnet type dropdown allows you to choose wireless as well (Figure G). It defaults to 24 hours. If you want to activate the scope when the wizard is complete, click the Activate this scope checkbox. If you leave it empty, you must activate the scope in the DHCP Microsoft Management Console (MMC) snap-in. 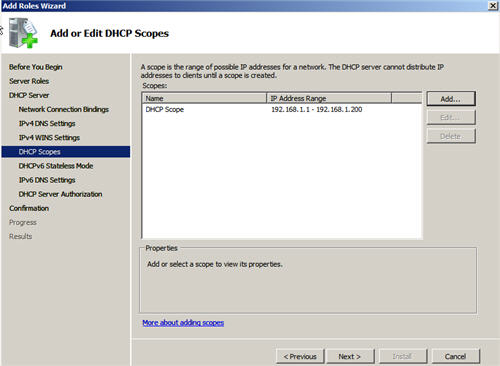 You can add multiple scopes before continuing the wizard

With Windows Server 2008, if you have a router (Figure H) that supports and is configured to take advantage of IPv6, you can enable this functionality on your network. 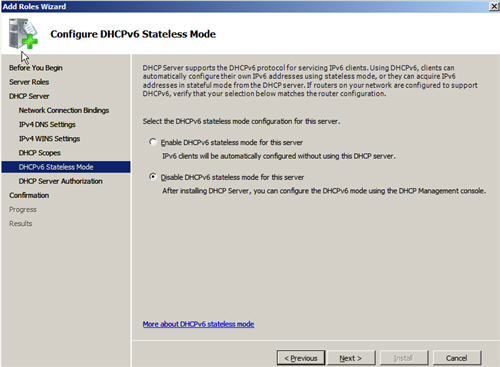 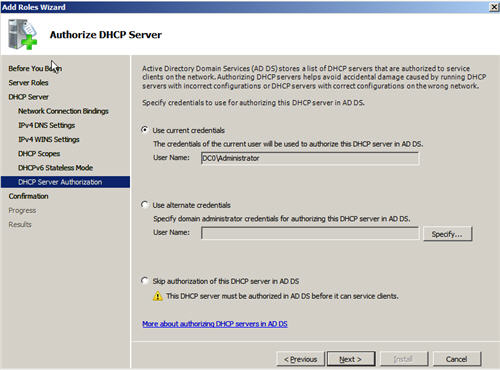 You are now ready to review (Figure J) and confirm your settings before applying your DHCP settings (Figure K). 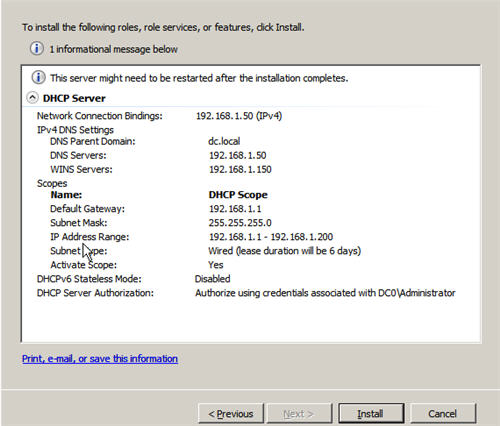 Reviewing your DHCP configuration before applying 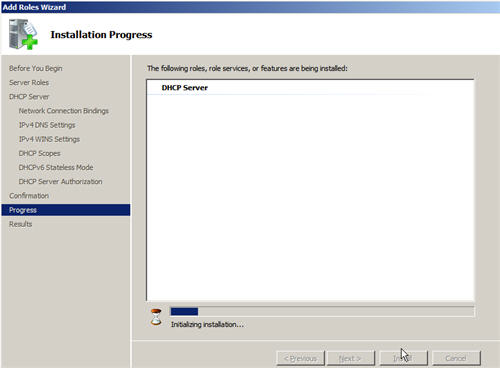 Once you have installed the DCHP server, you can manage it from the DHCP MMC snap-in (Figure O) located in Administrative tools. On this screen you can create additional exclusions and reservations.

In addition to specifying exclusions, you can add reservations to your DHCP server. By adding a reservation, you ensure that a machine always receives the same IP address from the DHCP server. 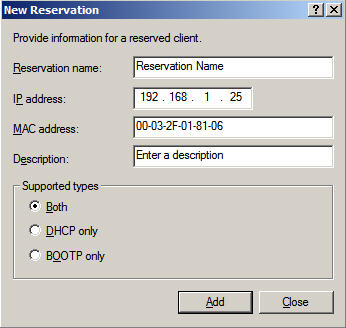 In addition to specifying reservations, you can add exclusions to your DHCP server (Figure M). By adding exclusions, you ensure that machines never receive a DHCP lease for that range of IP addresses. This is very useful to block IP addresses for your servers and routers.

In order to add Exclusions, right-click on Address Pools and choose New Exclusion Range as shown in Figure N and Figure O. 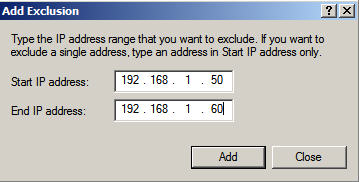 Delivered Weekdays
Sign up today
Share: How do I… Install and configure a DHCP server in Windows Server 2008?
By steven s. warren
Steven S. Warren is a popular author residing in Winter Haven, Florida with his wife and 2 children. As a columnist on such well-known IT web sites as Techrepublic.com, CNET, and ZDNET, Steven has published numerous articles. Additionally, Steven holds the following certifications: MCDBA, MCSE, MCSA, CCA, CIW-SA, CIW-MA, Network+, and I-Net+. You can visit his web site at http:\\\\www.stevenscottwarren.com. \ \ He is also a Microsoft Most Valuable Professional and has book on VMware Workstation 5 forthcoming.