How do I… Use the Windows Common Feed List to manage RSS feeds?

With the release of Windows Internet Explorer 7, Windows Vista, and Outlook 2007, Microsoft has also included a new feature, the Windows Common Feed List (CFL), as a viable option for managing your RSS Feeds. Wally Bahny shows you how it works.

Really Simple Syndication (RSS) has exploded across the World Wide Web. Most Web sites, especially those providing news or blogs, have RSS options to help you manage your content. There are also probably hundreds of software programs out there that help you manage your RSS feeds by aggregating them into one program.

With the release of Windows Internet Explorer 7, Windows Vista, and Outlook 2007, Microsoft has also included a new feature, the Windows Common Feed List (CFL), as a viable option for managing your RSS Feeds. Microsoft has made it easy to have all of your RSS content stored in one place and accessible from all of these different points. Also, Microsoft has created a COM API for the CFL that allows programmers to write applications that use the Common Feed List.

The Common Feed List also uses a Windows Service to check for and download new content. This service can be stopped and started most easily by running msfeedssync enable and msfeedssync disable from a command line.

Being the first application to ship with the Common Feed List, Internet Explorer 7 is the best place to start. Within IE7, and later IE8, Microsoft included the CFL as part of the Favorites sidebar. Clicking on the Favorites button displays a box that has three tabs: Favorites, Feeds, and History. You can also pin the sidebar permanently to IE by clicking on the dock icon in the upper right of the bar. Figure A shows the sidebar pinned to IE8. 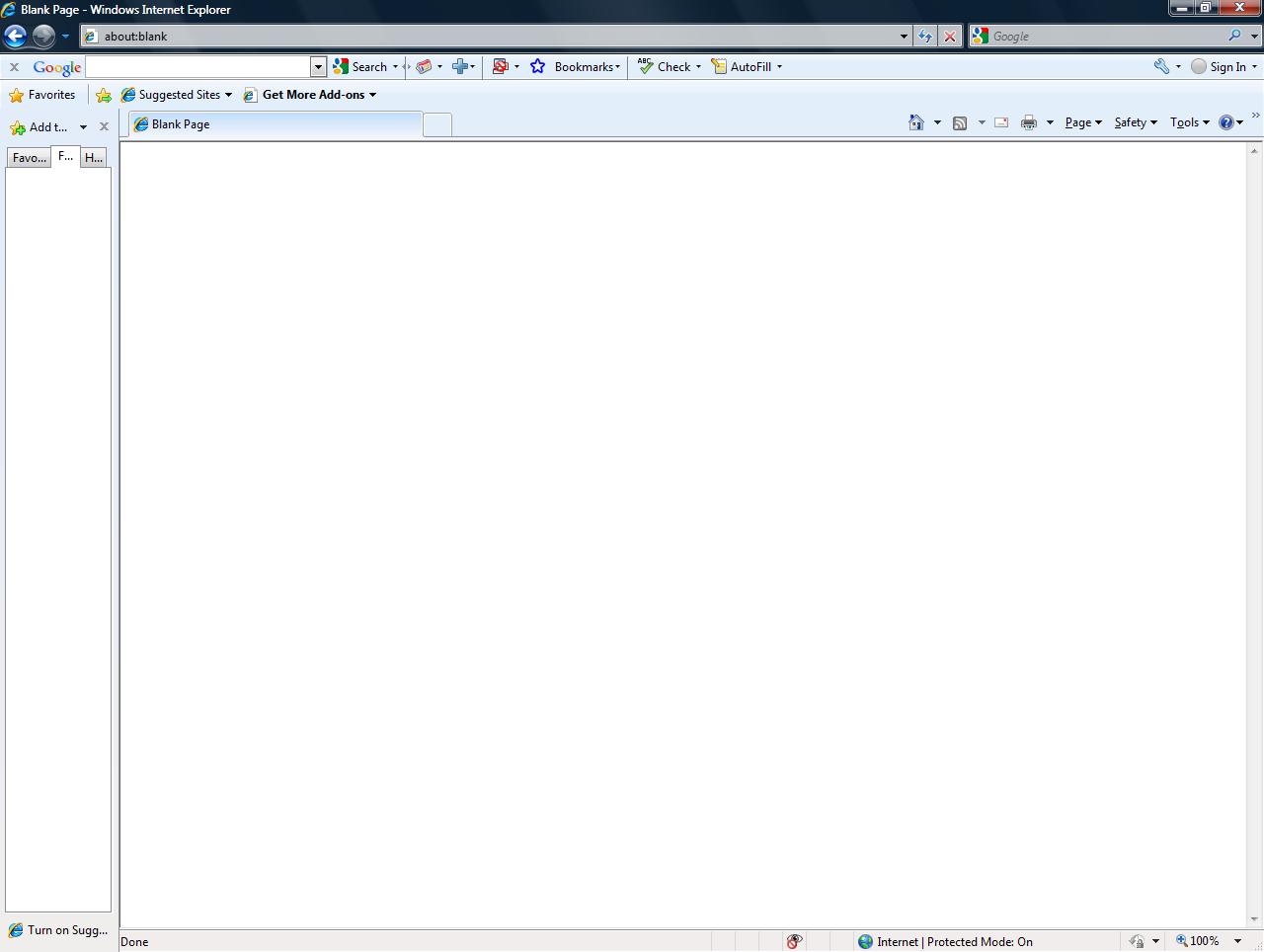 Internet Explorer 7 and 8 arrive with a few feeds from Microsoft included. Microsoft has also added a new button on the toolbars which is context sensitive and is only active when IE detects a feed on a Web page. Click on this icon while on your favorite news or blogs site, such as TechRepublic, to automatically go to a page allowing you to subscribe to the feed. Depending on the Internet Explorer add-ons you have loaded, you may also have options from Google, Yahoo, and others allowing you to subscribe to those services as well. (Figure B) 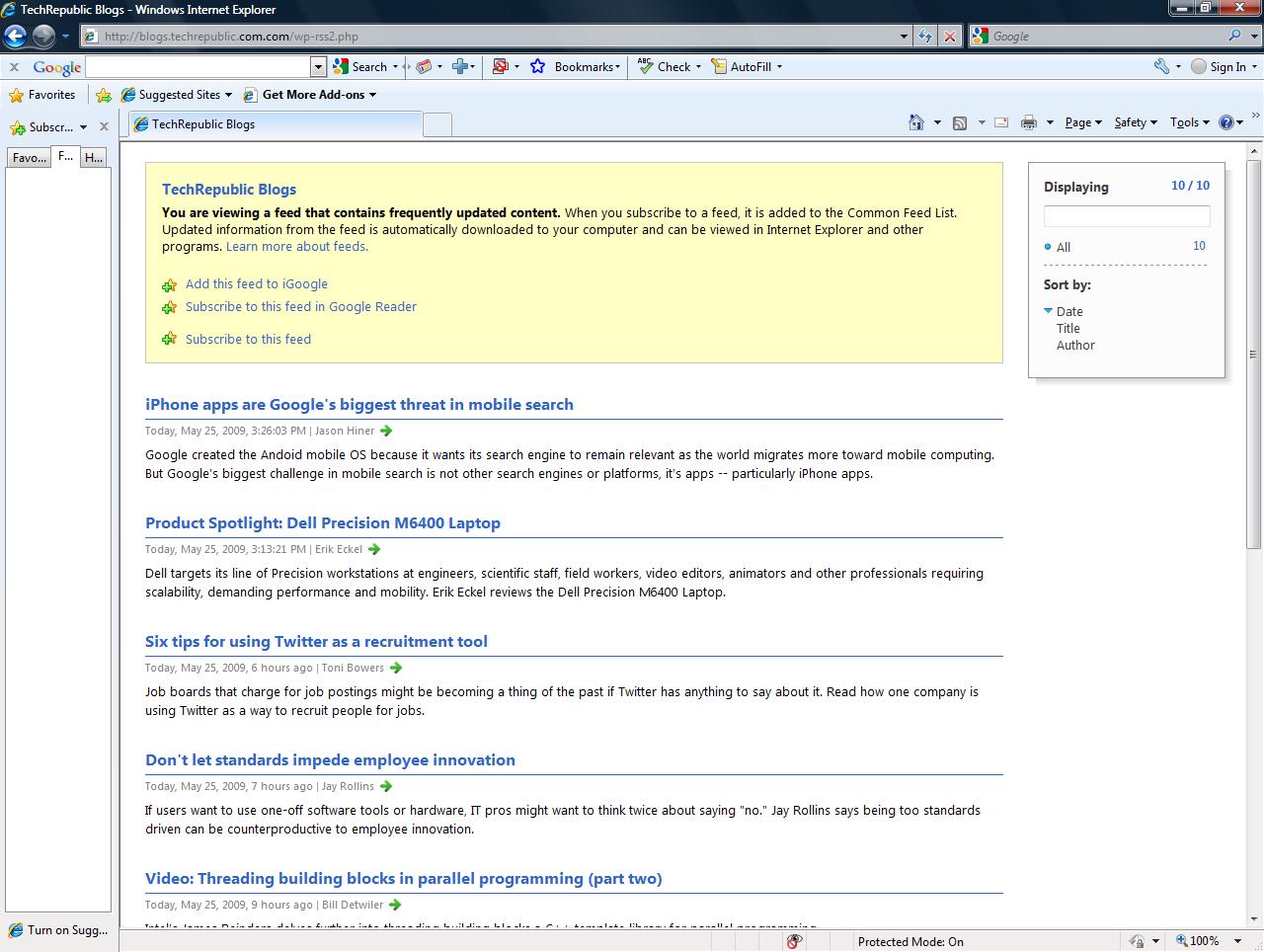 Once you click “Subscribe to this Feed”, Internet Explorer will ask you where you want to save it. The Common Feed List allows for the creation of folders to better group feeds. Give the feed a name and save it to the folder of your choice, or simply save it in the root “Feeds” folder. (Figure C) 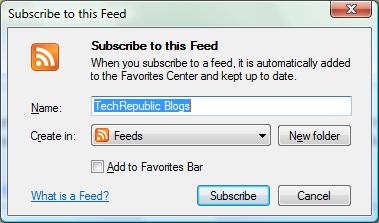 Once you have saved one or more feeds to the CFL, Internet Explorer will display those feeds in the aforementioned sidebar. Feeds with new content will have a title in bold; folders containing feeds with new content will also be bolded. The Common Feed List allows for automatic read marking, so simply opening the feed to read the new content and then closing the browser or tab will mark the new feed items as read. Figure D shows the newly added feed with a bold title. 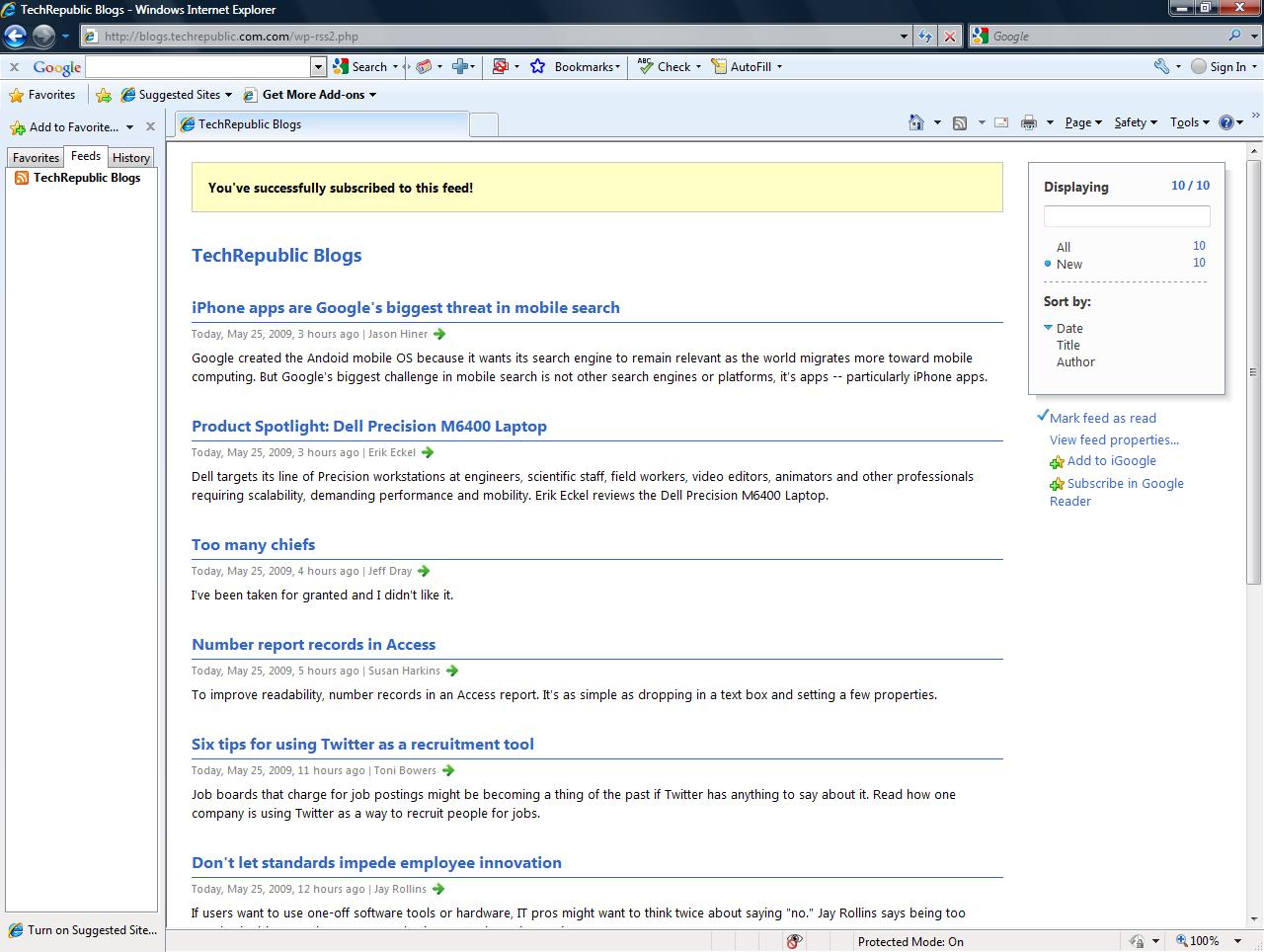 Finally, Internet Explorer offers several options for the management of feeds. All of these options are presented via a right-click menu on the feed itself. Among common options such as Rename and Delete are a Properties dialog and – in Internet Explorer 8 – the ability to add the feed to the Favorites bar. The Properties dialog (Figure E) allows you to rename the feed, modify the schedule the CFL uses to check for updated content, automatically download attached files, and modify the number of feed items kept. 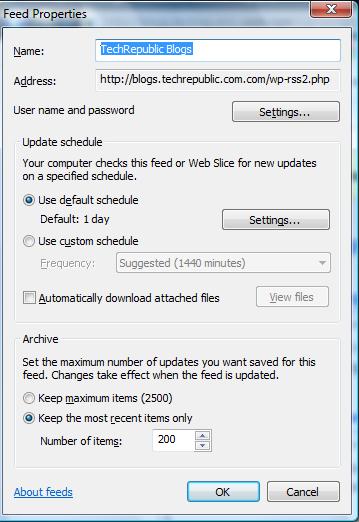 In late 2006, when Office 2007 was launched, Microsoft also announced that Outlook 2007 would be able to connect to the Common Feed List. In Outlook, the CFL is accessed from the Mail Folders pane on the sidebar. Figure F shows Outlook 2007 with the RSS section circled. 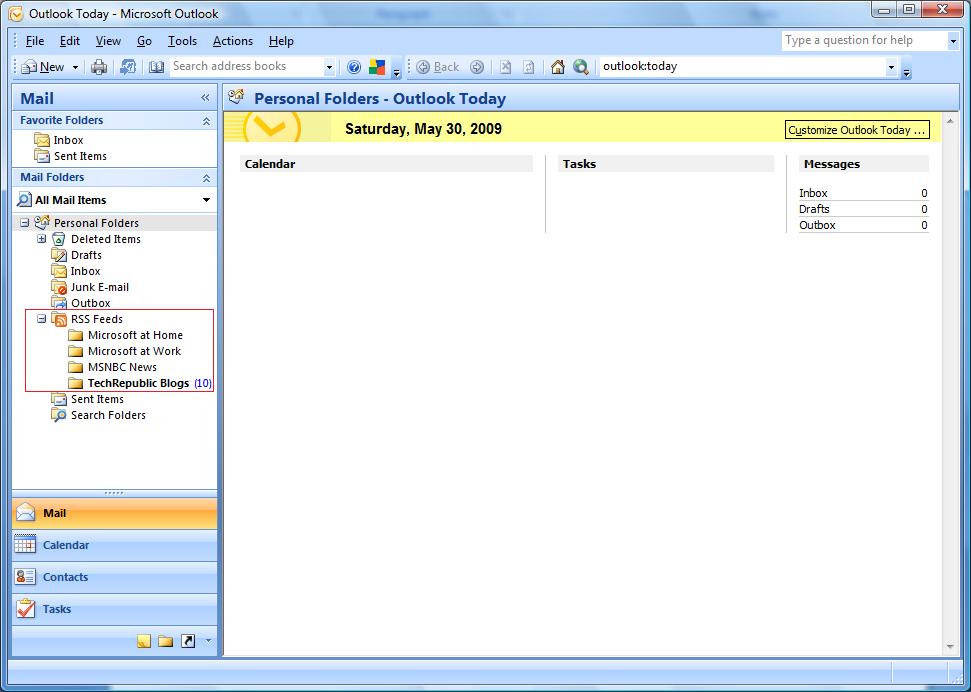 Unlike Internet Explorer, you are only allowed to add or remove feeds from Outlook itself; you cannot manage the feeds at all, including adding or removing them from the CFL. However, Outlook has the ability to import feeds from the CFL, and will do so automatically with new feeds.

Outlook also behaves differently when your primary account is an Exchange account. When connected to Exchange, Outlook stores your RSS feeds on your Exchange server and will not connect to the CFL at all. This can be a major problem if you previously used IE for your feeds management and then want to switch browsers but still use the Common Feed List to manage your feeds or don’t want to lose your content history.

Microsoft also has another way of accessing the Common Feed List. With Windows Vista, and soon Windows 7, there is an included gadget that will connect to the CFL and display, by default, the most recent 100 headlines across all of your feeds. Simply named “Feed Headlines”, this gadget is customizable to be bound to just one of your feeds, perhaps creating one gadget for each feed, as well as limiting it to fewer headlines displayed. Figure G shows the Feed Headlines Gadget in the Windows Vista Sidebar.

Single-clicking on a displayed feed will pop up a small window showing the first paragraph of the feed item (Figure H), and double-clicking will launch your default browser to the feed address, displaying the full item. This is where the functionality ends, however. The Feed Headlines Gadget still relies on Internet Explorer to manage which feeds are in the Common Feed List as well as the per-feed settings. 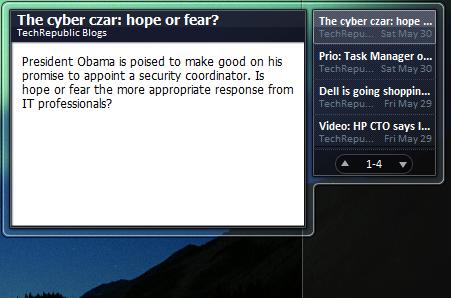 Finally, Microsoft has released a COM Library that allows for the creation of custom Common Feed List-linked applications. Exposing the feed objects, from the root Feed folder all the way down to files attached to the feed items themselves, this API has the ability to make the Common Feed List be whatever you or your company want it to be.

In browsing the Web, I have been unable to find any applications written by third party vendors for the Windows Common Feed List. The only application I was able to find was an IE7 extension, Feeds Plus, written by a pair of Microsoft interns that were involved in the Windows RSS development process. This extension provides aggregation and notification for your Feeds list. Unfortunately, this extension is not compatible with IE8.

Final thoughts and next steps

In all, the Windows Common Feed List provided most of the functionality that I was looking for in an RSS application with just a few shortcomings. Because of that, next time we will look more in depth at the COM API in the context of writing an RSS Reader application.

Share: How do I… Use the Windows Common Feed List to manage RSS feeds?
By Wally Bahny