Sunday's Patriots vs. Falcons contest could result in the largest data usage ever during an event, with fans streaming live video on social apps and watching Super Bowl commercials on the NFL's app. 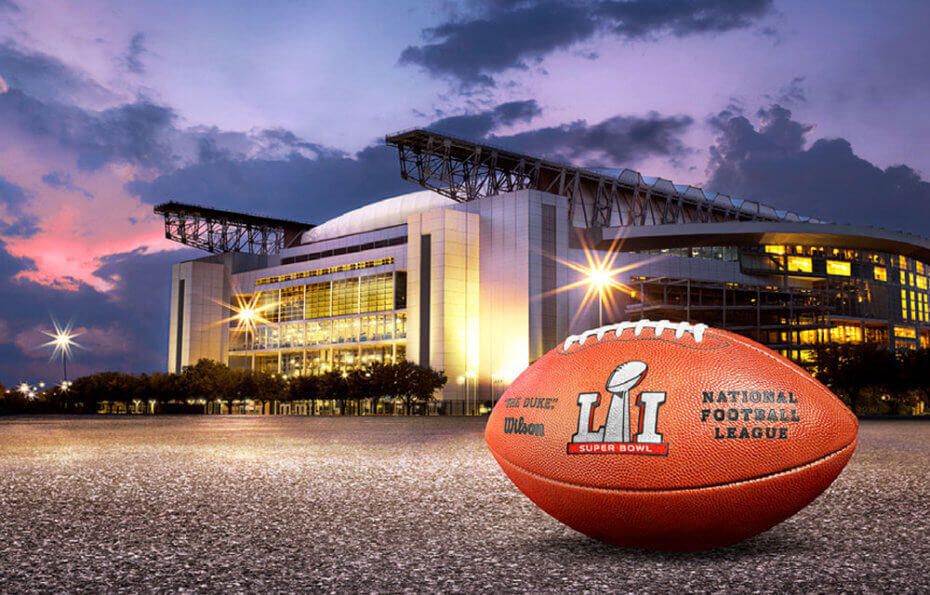 Super Bowl 51 is on track to be a historic event, regardless of what happens on the playing field, with data usage records expected to top all previous levels when the New England Patriots go up against the Atlanta Falcons on Sunday.

Last year, Super Bowl 50 at Levi’s Stadium in Santa Clara, Calif. resulted in 10.1 terabytes of data transferred over the stadium’s Wi-Fi on game day. That was a 63% increase over Super Bowl 49 in Glendale, Ariz. in 2015.

This year’s Super Bowl, at NRG Stadium in Houston, Texas, the regular-season home of the Houston Texans football team, will easily achieve record-shattering data usage numbers and simultaneous users to beat the numbers in 2016, according to Michelle McKenna-Doyle, CIO of the NFL.

“It’s [data usage] doubled every year for the last five Super Bowls. Will it double this time? I don’t know that it will necessarily double. I’m expecting a 25-30% increase, but we might be surprised again as more people create and upload their own video,” McKenna-Doyle said.

NRG Stadium was built in 2000, long before the NFL began requiring that stadiums include Wi-Fi to improve the fan experience. Wi-Fi had to be added as a retrofit for NRG. “NRG is one of the largest stadiums in terms of its square footage footprint, as well as one of the busiest stadiums in the country. That, coupled with the fact that the Super Bowl was coming up, the engineering, the design, the timelines, the density–all of those were of the utmost importance. It was a serious undertaking to say the least,” said Monnie McGaffigan, president of 5 Bars, which designed and installed the Wi-Fi for NRG.

The stadium has a 1.9 million square foot footprint, including the entrances, luxury suites, lounge areas, and press boxes, and the stadium typically holds 71,795, although capacity changes slightly for major events such as the Super Bowl.

Planning for Super Bowl 51 began in the fall of 2015, and the project began in earnest in early 2016. “We had a pretty short runway when you consider a project of this size and magnitude,” McGaffigan said.

“This is arguably the most technologically advanced Wi-Fi installation in the country at this point, but I’m sure there’s someone right behind us,” McGaffigan said.

SEE: How the NFL and its stadiums became leaders in Wi-Fi, monetizing apps, and customer experience (TechRepublic free download)

McKenna-Doyle said it’s complicated to install Wi-Fi for any stadium, but NRG had additional issues because of it being a retrofit. “We were very happy that the Texans made the playoffs because that gave us one more game to test [the network], and we were able to get the numbers [for network speed] where we wanted them to be.” The main concerns were “primarily around speed upload and download speed and getting a really strong signal,” McKenna-Doyle said. “When you think about tuning, you’ve got access points up high that are shooting signals down, and you put some in the lower bowl like under seats and they’re shooting upward and if you don’t have the power tuned right they collide with each other and if you’re a fan sitting in a zone where a collision is happening, you can’t really connect to either one and keep a signal.”

“You want the power tuned just right for each zone, and not bleed into the other zone,” she said.

How Extreme Networks, Verizon, and AT&T prepared for Super Bowl 51

It’s not just Wi-Fi that fans will be using; the Distributed Antenna System (DAS) is what allows fans to access cellular data. Verizon customers attending Super Bowl 51 will be given a priority over customers of other cellular providers because Verizon installed and owns the DAS at NRG.

At last year’s Super Bowl, 15.9TB of data was transferred via DAS, in addition to the 10.1TB that went over the stadium’s Wi-Fi network. Verizon led this with 7TB of data on its cellular network, and AT&T had 5.2TB transferred over its network last year.

This year, Verizon and Extreme Networks partnered to install equipment to improve connectivity at the Super Bowl Live area at Discovery Green where fans gather throughout the weekend, airports, and other transportation hubs, hotels, and popular tourist areas for Super Bowl fans in Houston. Extreme Networks is the official Wi-Fi and data analytics provider for Super Bowl 51.

Verizon’s updates will result in a 450% increase in capacity at the stadium and in the surrounding fan areas, said Karen Schulz, Verizon spokesperson. Extreme Networks also partnered with Verizon to provide the neutral host DAS at NRG. Neutral host means that customers for other cellular providers can access the DAS.

“The neutral host DAS will work for all of the cellular customers. Verizon clients will get a priority over an AT&T client. That’s Verizon’s prerogative since they’re the ones who made the investment. This entire system is new, and it’s a Verizon DAS system paired with our Wi-Fi system,” said Norman Rice, executive vice president of global marketing, supply chain, and corporate development for Extreme Networks.

Leo Perrault, Verizon operations executive director for the south central US, said, “We have some priorities on the Wi-Fi network. When you think about carving up that network system, we have a certain amount reserved for our Verizon Wireless customers.”

“It’s always part of the negotiations as to how much access other carriers want. We built it very dense for our Verizon customers, and other carriers pick and choose to some degree which antennas they want access to,” Perrault said.

To install the DAS, Verizon included antennas underneath the cupholders in the upper bowl of the stadium, to avoid bleed over into the lower seating areas. “We have been aggressively using the Texans home games and the Texans playoff games as our dry runs. We feel like we have a good handle on how the game will operate,” Perrault said. AT&T has spent $40 million to ensure that its customers have cellular service during Super Bowl 51 and fan events around the city of Houston. It’s added 100% more capacity to its DAS, and it’s also bringing in its popular Giant Eyeball Antenna to boost connectivity, said Clark Bird, technical consulting engineer for AT&T.

“We’ve [added DAS antennas] to about 13 hotel locations, team hotels, event hotels. We’ve put DAS networks in those, and another 500-plus cell sites around the Houston area that we’ve beefed up with capacity and new antennas and things like that to make the network better,” Bird said.

Both Verizon and AT&T will have engineers in “war rooms” ready to tackle any problems that erupt during the big game. The NFL said it will also have engineers on hand, ready to solve issues. Mobile apps are valuable for teams, and for the NFL, as they can be easily monetized to sell merchandise, tickets, food, and drinks to fans. Apps also provide data about where a fan is within the stadium, so that targeted offers can be made based on where they’re located.

This year, the NFL created its own app for Super Bowl 51. (Last year, it worked with VenueNext to create the app at Levi’s Stadium.) The Super Bowl 51 app has new features such as allowing fans to watch Super Bowl commercials during the game, which is a first. In the past, commercials weren’t on the app in order to avoid using too much bandwidth in the stadium.

“We built our app internally. I think early on with mobile apps we thought a lot about having replays in it. And while we will still see replays on it, we see that very few people look at replays on their phone, so we’ve really downplayed the use of replays. We’ve upped and integrated the app with more fun facts about teams and integration with NFL mobile so that there is a greater feeling of consistency for the game. You won’t feel like you’re using two separate apps as fans have in the past. You can ask for directions where to go, and what time things start, who will be where, what time the lines open up, and where’s the shortest bathroom line,” McKenna-Doyle said.

SEE: Super Bowl 51: How to tweet your company to the top during the Super Bowl (TechRepublic)

It puts an obvious burden on any venue’s network when there are tens of thousands of people uploading data at the same time. The stadium can handle up to 48,500 simultaneous users during Super Bowl 51, McGaffigan said. Last year, there was a peak of 19,223 concurrent users at Levi’s Stadium during Super Bowl 50.

Live streaming through social media will play a large role in the additional data usage, as well as fantasy sports games. This will be the first Super Bowl where the NFL allows live streaming, Rice said.

Verizon anticipates Facebook Live, Periscope and other live streaming applications accounting for much of the data usage that will go over the DAS, Schulz said.

“The halftime show will be the number one Facebook Live video feed that day in the world. That’s going to all happen at the same time. And that’s really hard if everybody decides to use it at the same time. They do it at halftime and kickoff and at the end when it’s over and the celebration is happening. We definitely have peak moments,” McKenna-Doyle said.

“We’ve done a lot of work with Twitter. We streamed a game live on Twitter, and it was very successful. I think the partnership is really important between us and all the social media outlets,” McKenna-Doyle said.

Share: How the NFL and NRG Stadium are preparing for record-breaking data usage during Super Bowl 51
By Teena Maddox
Teena Maddox is a VP at Brodeur Partners. She is a former Associate Managing Editor at TechRepublic. Teena's lifelong journalism career has included writing on staff for publications including People magazine, W magazine and Women's Wear Daily.