The Nook Color is a $250 e-reader powered by Android. Learn how to hack it into a powerful and fully functional Android tablet.

The Android Honeycomb 3.0 operating system and the first fleet of tablets that are going to run it are all looking mighty impressive. Unfortunately, it’s also looking like most of them will be even more expensive than the Apple iPad, which starts at $500. 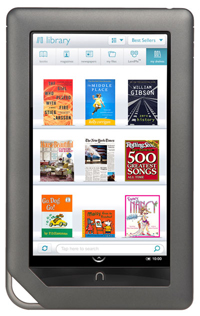 If you’re tempted for an Android tablet but don’t want to spend a small fortune, then you may want to try the Barnes & Noble Nook Color (right). Out of the box, it’s primarily intended to be an e-reader but it’s a 7-inch touchscreen device that is actually running Android under the hood. It even gives you a few apps like Chess, Sudoko, Crossword puzzles, and Pandora.

However, you can also kick things up a notch with the Nook Color by hacking it to run a full version of the Android OS. Then you can install your favorite homescreen UI and your favorite Android apps. You can even install the Amazon Kindle app and other e-reader apps and libraries so that you’re no longer locked into just the Barnes & Noble library on this device.

Of course, hacking or “rooting” the Nook Color will void your warranty and should only be done by those who are very comfortable fiddling with technology. Also, TechRepublic is not responsible for any damage that you do to your Nook Color while attempting any of the steps that we’re about to show. Proceed at your own risk.

Nevertheless, the process is relatively simple and if you run into trouble you can always do a factory reset on the device and start from scratch. Just keep in mind that if you’re not tech-savvy and you do this incorrectly then you could cause your Nook Color to become unbootable.

Okay, now that we’ve got the disclaimers out of the way, let’s go through the steps on how to hack the Nook Color.

These steps are based on the work done by NookDevs.com. I’m going to show you how to “root” a Nook Color using a Windows computer. You can also do it from Mac or Linux, but the steps are a little bit different (consult the NookDevs guide for details).

Now, here are the steps:

Once you get your Nook Color rooted and running your favorite Android apps, you can always kick it up another notch by trying out an early version of the Honeycomb 3.0 tablet OS that has been hacked to run on the Nook Color using a bootable MicroSD card.

Check out our photo gallery of unboxing the Nook Color, comparison photos with Galaxy Tab and iPad, and the images of the Nook Color running the full Android OS. As you’ll see, the Nook Color is a pretty nice piece of hardware.

Share: How to hack the $250 Nook Color into a full Android tablet
By Jason Hiner
Jason Hiner is Editorial Director of CNET and former Editor in Chief of TechRepublic. He's co-author of the book, Follow the Geeks.