How to switch boot partitions through a VPN tunnel

Daryl Lucas explains how he rebooted his office PC into a different OS while tunneled into it through a VPN tunnel.

Thanks to developer inertia, I’ve got a dual-boot office PC, with one partition running Windows Vista and the other Windows 7. It is not uncommon for me to switch from one to the other in the course of a week. I also need to work remotely at least one week out of every three, and sometimes more often. So, I often need to reboot my office PC into a different OS while I’m tunneled into it through a Virtual Private Network (VPN).

It took me a little while to figure out how to do this, but it’s actually not that hard, though I wouldn’t call it very discoverable. I’d like to explain how I do it.

The first problem is that you can’t just reboot as usual, via the Start button, if you’re accessing a remote Windows 7 or Vista PC via RDC. The host PC won’t let you. All it’ll let you do is log off and disconnect (see Figure A).

The trick to rebooting the host while inside the host is to hit Ctrl+Alt+End and choose the option to restart.

But that’s not good enough if you want to boot into a different partition. Once you’re logged out, you will lose your remote connection, and you aren’t going to get it back in time to select a different OS.

To reboot the host into a different boot partition, fire up the System Configuration applet. (Note that you want to perform these steps on the host PC, not the client, while connected to it via RDC.) If you have made the Administrative Tools menu visible, you’ll find it there; if not, no worries, just type System Configuration in the Run box, and you will see it as one of the options (see Figure B). Just select it from there. 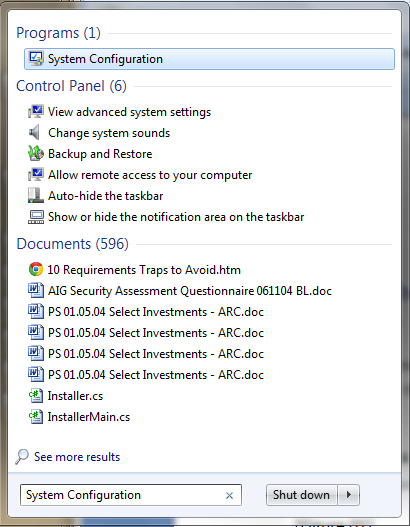 Once you’ve got System Configuration running, you’ll see a dialog box that lets you change the default boot OS. To reboot your host PC in the other OS, change that setting. To do that, display the Boot tab (see Figure C). 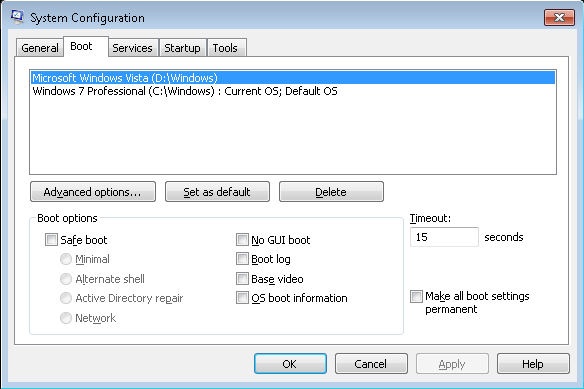 You will see a list of all your boot partitions, with the active one saying, “Current OS,” and if it also happens to be your default boot OS, “Default OS.” Select the OS you want to reboot into (instead of the current one), and click the Set as Default button, and then Apply. If your default and current OSs are now different, you’ll see that reflected in the displayed status (see Figure D).

Click OK, and you will be prompted to restart (see Figure E).

Click Restart, and you’re done. As long as nothing prevents your host PC from booting, you will soon be back up.

Of course, you will lose your RDC connection and will have to wait till the host PC reboots into a login screen before you can reestablish it. You will also be forcing Windows to shut down running programs, so be sure to save your work first. But don’t worry about your VPN client; you should not have to reestablish the tunnel, just your RDC session. To switch back to the original OS, just repeat the process.

If you rely on a dual-boot Windows system, you don’t have to choose between boot partitions before leaving the office. Using Windows’ System Configuration applet, you can switch between them at will.

Delivered Weekdays
Sign up today
Share: How to switch boot partitions through a VPN tunnel
By djlucas