HP to revive the TouchPad as a Windows 8 tablet?

The HP TouchPad's enduring legacy may be how many times it returned from the dead. Here's the latest report of its revival. 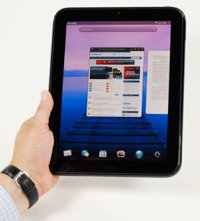 The HP TouchPad may have yet another life. Hewlett-Packard is testing Windows 8 on TouchPad hardware, according Clayton Morris from Fox Business News.

Sources at HP tell me the hardware team has been busy doing proof of concept work testing Windows 8 Preview Edition on the fire sale devices. Internally there’s been discussion about reviving the defunct tablets or building new devices with Windows 8 in mind… Layoff notices are also on hold as HP assesses former CEO Leo Apotheker’s decision to shutdown the PC division. Part of that assessment includes WebOS. Sources on the WebOS team tell me that HP is actively meeting with a number of interested buyers including HTC, LG, Nikon, and Amazon.

Hewlett-Packard’s TouchPad offered a lot to like as a productivity device for business users, as I noted in my review in June, but sluggish sales led HP to quickly pull the plug on it in August. However, a price drop to $99 caused the TouchPad to become a runaway hit, as buyers couldn’t get enough of them in the fire sale.

It shouldn’t come as a surprise that HP would be considering a re-entry into the Windows tablet market, if it stays in the PC hardware business. The company was Microsoft’s top partner during the Tablet PC era before it bought Palm and tried to go it alone in the tablet market.

As interesting as Windows 8 is starting to look as a tablet OS, I can’t say that I’m that excited about the idea of Win8 running on the TouchPad hardware. The hardware itself was nothing special. In fact, it was the biggest thing holding back the TouchPad. The WebOS software with its elegant multitasking was what I was really impressed with. In fact, the WebOS on iPad hardware — with a robust app catalog — would probably be my ideal tablet.

Share: HP to revive the TouchPad as a Windows 8 tablet?
By Jason Hiner
Jason Hiner is Editorial Director of CNET and former Editor in Chief of TechRepublic. He's co-author of the book, Follow the Geeks.