Francisco Marzoa's first Android app, Luckiest Wheel, is a smash hit in the Amazon Appstore. He shares tips on getting your apps noticed in the market.

Writing for TechRepublic gives me the opportunity to meet some interesting people. We live in a digital age where the Internet connects us like never before. For me, making a professional contact and even striking up a friendship with someone halfway around the world really hammers that point home. 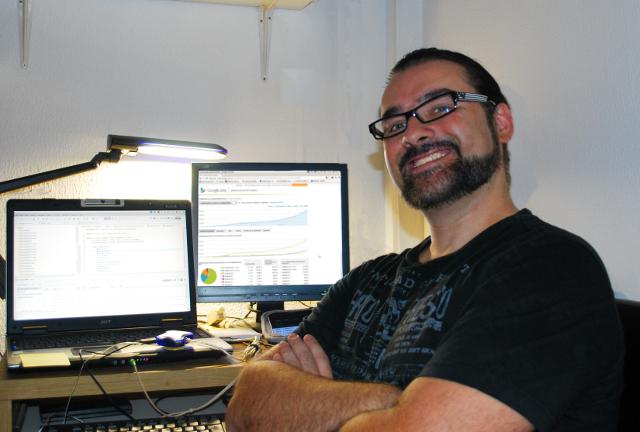 This was the case with Francisco Marzoa (pictured at right), an indie Android developer from the north of Spain who got in touch with me last March after I ran a post discussing techniques for improving your ratings in the Google Play Store. At the time, Francisco had just released his first ever Android app called Luckiest Wheel. Over the course of several emails, we bounced a number of ideas off one another and vowed to keep in touch, sending periodic updates on our respective projects.

I often hear that without a big studio, a team of developers and artists, and a lot of cash laying around, it’s no longer possible to create software that can get noticed in what has become a very crowded and competitive space. Francisco and his fledgling game development house, Iberdroid, not only got his title “out there,” he did it while he was laid off from his full-time IT gig due to the struggling worldwide economy.

I invited Francisco to share his inspiring story along with some of the “secret sauce” that he used to launch Luckiest Wheel into the hands of gamers around the world. He graciously agreed.

My interview with Francisco

TechRepublic: Tell us a little bit about yourself.

Marzoa: My name is Francisco Marzoa and I was born in Asturias, in the North of Spain. I started programming in 1987 on an MSX computer that was a gift from my parents and an uncle as a reward for my good grades in school. Since then, I’ve continued to code, first as a hobby and later in a professional capacity.

TechRepublic: How did you get into Android development specifically?

Marzoa: Most of my education has been autodidactic, and so too it has been with Android and Java. I bought a book on developing Android games and read about half of it before completing my first game.

There were several motivations for me to move into Android development. Perhaps the most important is that I thought (and still think) that there exists great growth potential. I believe we are still in the first stages of Android expansion, and even in these early stages there have been some great success stories.

TechRepublic: I understand that due to the weak economy, you were laid off from your full-time job. What factor did this play in your decision to branch out into Android as an indie developer?

Marzoa: I never used to prioritize the earnings potential of my spare-time projects, but as you know the economy is really bad in the world and especially in some countries like Spain. By October of 2011 my situation became so desperate that I went and talked with a social worker.

With luck, I landed a job maintaining and improving a website for a company that did most of their sales online. The wage was low and the position was only temporary, but I felt fortunate to have been chosen among dozens of candidates. And on the plus side I could do most of my work from home so I had more time to invest into my personal projects.

Over the course of several months, I started to improve a number of websites that I had built over the years, but never saw any real money for my efforts. Then come the end of April 2012 Google released the Angry Penguin, and I thought that I needed to get out of the website business and try something new. And that led to the first lines of Luckiest Wheel being written.

Read the rest of my interview with Francisco.

TechRepublic: Since Luckiest Wheel was your first Android project, how long did it take you after banging out those first couple lines to have a finished product you could submit to Google Play?

Marzoa: It took me about a month to code and release the first version. It was a “learn-by-doing” process. As expected, I committed several mistakes due [to] my lack of Android experience, but I rolled with the punches. In the past three months I have published more than 50 new releases of the game, some correcting bugs but most of those updates were adding new features.

TechRepublic: Not too long ago Luckiest Wheel rose to the number two spot on Amazon’s most popular app list, sandwiched right between two big budget titles. How did you learn your game had topped the charts and what went through your head?

Marzoa: It was a true surprise for me. I was checking my AdMob account and I noticed a significant boost in revenue. At first I could not explain it. Installs on Google Play had not grown enough to explain that difference. Honestly it took me a while before I thought of checking the Amazon Appstore. When I did, I discovered Luckiest Wheel went from about 500 daily installs to more than 18,000 in a single week.

I was really impressed and excited. To be candid I didn’t have a lot of confidence in the Amazon Appstore mainly because at that time most of my app downloads were in Spain, and then Amazon’s Appstore was only available to US users (since then Amazon has expanded the availability of its app store). So it was a big surprise and a good lesson, and now I treat my Amazon developer account with the same interest that I do my Google Play account.

TechRepublic: Many aspiring developers struggle to get their apps noticed in the market. Can you share some of the techniques you’ve used?

Marzoa: Initially I invested about $100 on AdMob advertising after publishing Luckiest Wheel on Google Play, before publishing on Amazon Appstore. Today I realize that such a small advertising budget is not effective, and I think it had no real effect.

Perhaps the most important thing for getting noticed is that you write an app people like! I found the best install boosters are satisfied users that share your application link among their friends and relatives. Also it’s important [to] listen [to] your critics. Critical reviews are a good source of ideas to improve your game and attract more users. That does not mean that you should do what every single user says on a review, but rather consider them as a whole. Most of the new features added to Luckiest Wheel were a result of user feedback.

I greatly appreciate Francisco taking time out to share his tale with TechRepublic readers. If you are not familiar with Luckiest Wheel, I encourage you to take a look at it, as well as his second title (and my personal favorite), Rainword.

I’ll close this post with another quote from Francisco (who couldn’t be happier about being an indie Android developer!):

“Luck is an important part of any great success, and this is not an exception. But it is pretty clear that if you do not buy a lottery ticket, you will never win the big prize. Fortunately Android development does not require investing a lot of money to get started. So if you love coding as I do, in the worst of outcomes you will have a good time writing your app.”

Delivered Weekdays
Sign up today
Share: Indie developer hits number two on Amazon with his first Android app
By William J. Francis
William is a self-described maker. With over 20 years of industry experience he has been a part of building digital solutions for some of the best-known brands on the planet. He is a published author, a patented inventor and developer of a video game that reached #1 on Amazon for a brief stint.