John Joyner explains how to install and use the DPM 2012 Central Console as part of the SCOM 2012 Console. The features you can enable allow you to manage backup operations for your organization.

The latest release of Microsoft’s enterprise backup product, System Center 2012 Data Protection Manager (DPM), took a logical approach to scaling the management of many DPM servers. IT pros know that to manage the backup status of more than a few computers or applications at once, you can save a lot of time with a central backup management solution.

Rather than create a new kind of console or dashboard to roll-up the status of many backup servers, DPM uses the System Center 2012 Operations Manager (SCOM) console to present a high-ground view of all backup operations in your organization. With the DPM management packs loaded, SCOM 2012 becomes the “Central Console” for DPM.

A consolidated alert view of all DPM servers in management in the SCOM console. (Click images for full-size)

After installing the DPM Central Console, you might be searching ‘for the console’. As mentioned, there is no new dashboard style view, rather a deep integration between the existing SCOM console framework and the DPM servers it is managing. In addition to familiar alert views, state views, and agent tasks–like many applications and their respective management packs–the DPM management pack adds some unique features. Microsoft extended the SCOM console with both scoped links to DPM console elements and some hybrid dialogs that only appear in Central Console mode.

After installing the Central Console, a view folder in the SCOM console, System Center 2012 Data Protection Manager is created, as seen in the left side of Figure A above. There are many well-organized alert and state view folders focusing on specific aspects of DPM health. Figure A shows the All Alerts view; the alert details concern a failed DPM replica creation. A goal of the Central Console is to monitor actionable DPM alerts relating to replica creation, synchronization, and recovery point creation. The management pack for DPM filters out alerts that do not require an action, such as a synchronization job in progress.

The way you are supposed to use the component integration is that you administer DPM from SCOM, using the features of the Central Console. You should only need to run the full DPM console for specific administration tasks, such as adding storage.

Here’s an example of how the Central Console removes the need for you to open a DPM console to fix a replica creation error. When you select a DPM alert in an alerts view in SCOM, context-sensitive alert actions appear in the tasks pane. Figure B shows, on the left, the tasks pane for DPM alerts for protected computers or resource groups. The task pane gives you one-click access to launch a consistency check job against the protected computer or resource group. 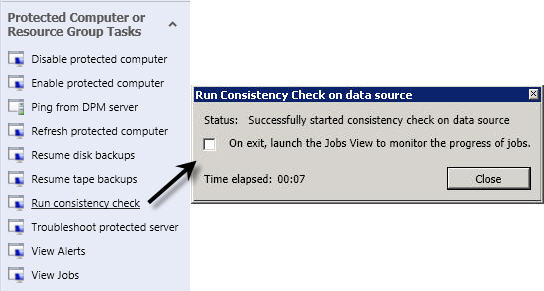 Running a consistency check on a data source from the tasks menu of the SCOM console.

Figure B shows, on the right, a confirmation dialog box from the DPM Central Console integration that the job has been launched. By selecting On Exit, Launch The Jobs View To Monitor The Progress Of Jobs and closing the box, the View Jobs tool will appear as seen in Figure C-another piece of custom integration between SCOM and DPM.

The View Jobs tool that is optionally invoked after launching a DPM job from the SCOM console.

Another scenario enabled using custom integration is the “Take recommended action” alert task. With this feature, a DPM alert may contain a link to a task — this task will invoke a situation-specific recovery action when one exists. For example, the recommended action alert task for a DPM recovery volume threshold exceeded alert is to invoke a custom dialog box that lets you modify the disk allocation for the DPM protection group from the SCOM console.