The XP Mode for Windows Virtual PC included specialized integration components designed to allow applications installed in the Windows XP virtual machine to appear as if they were running directly in Windows 7 – the applications even appeared on the Windows 7 Start menu. When you launch such an application from the Start menu, the virtual Windows XP loads in the background without any UI and it looks and feels as though you are running the application directly in Windows 7. Microsoft calls this feature Seamless Mode.

As I explained in my last blog post, Create a test machine in Windows 8 Client Hyper-V, Microsoft has done away with Windows Virtual PC in favor of focusing on Hyper-V, which is a much more powerful and feature rich virtualization platform and also is the main virtualization platform in Windows Server. However, as a side effect of doing so, the XP Mode capability has also gone by the wayside.

Now, before you get all excited, losing XP Mode was not part of some evil plan by Microsoft to push folks away from Windows XP. In fact, the reason for the disappearance of XP Mode is related to the differences in the hypervisor platforms used by Windows Virtual PC and Windows 8’s Client Hyper-V. Windows Virtual PC uses Type-2 hypervisor while Hyper-V is a Type 0 hypervisor. The differences in Hyper-V’s hypervisor type means that it can’t provide the same access that made XP Mode’s integration feature possible.

As I work through this article, I am going to assume that you have read my previous article, have already installed Windows 8’s Client Hyper-V, and are familiar with the basic steps that I covered on setting up a virtual machine.

To begin, just press the [Windows] key to bring up the Start Screen. Then, type Hyper and press [Enter] when Hyper-V Manager appears, as illustrated in Figure A.

Accessing Windows Feature tool from the Start Screen is easy.

After you launch the Hyper-V Manager, navigate to the Actions pane and select the New | Virtual Machine command. When the first screen of the New Virtual Machine Wizard appears, just click the Finish button, as shown in Figure B, to immediately create a virtual machine with preconfigured default settings. 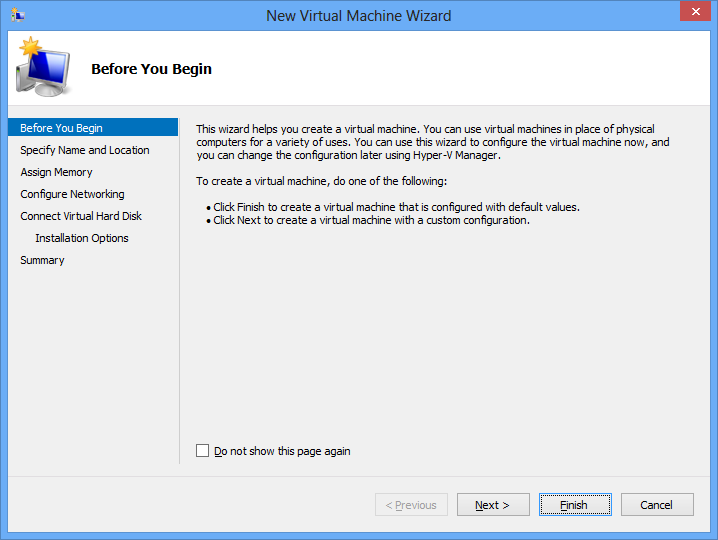 You can quickly create a virtual machine using the preconfigured default settings.

When you see the new virtual machine appear in the Virtual Machines list, right click the name and rename it to something like XP Virtual Machine, then go back to the Actions pane and click the Settings command, as shown in Figure C. 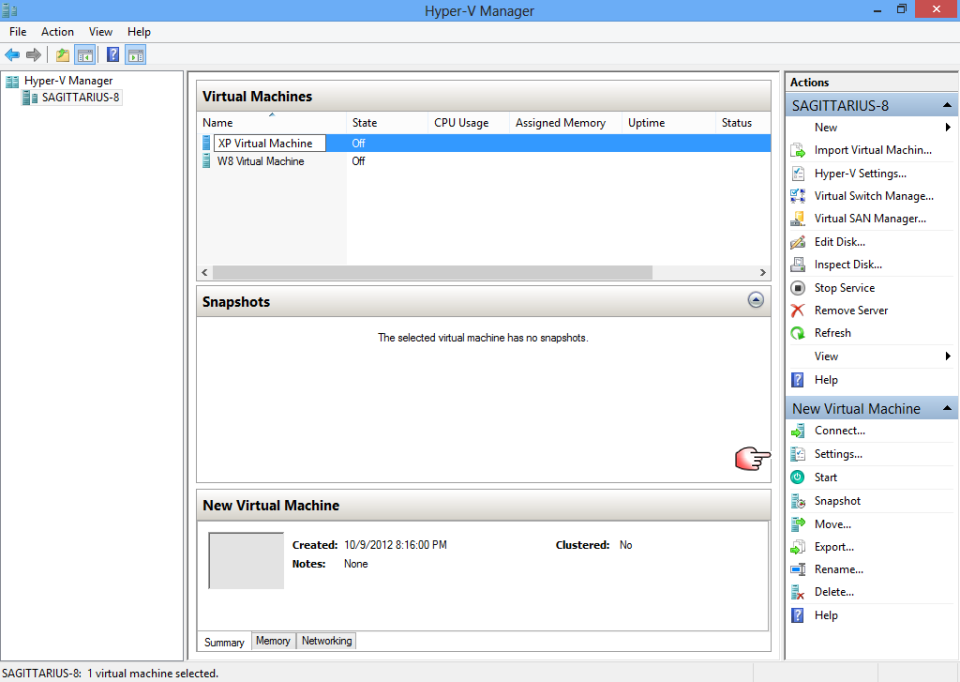 Renaming the virtual machine will help you to keep track of it.

Because Windows XP is an old operating system, it isn’t compatible with Hyper-V’s network adapter. As such, the first thing that you will need to do is add a legacy network adapter. Select the Legacy Network Adapter item, as shown in Figure D, and click the Add button. 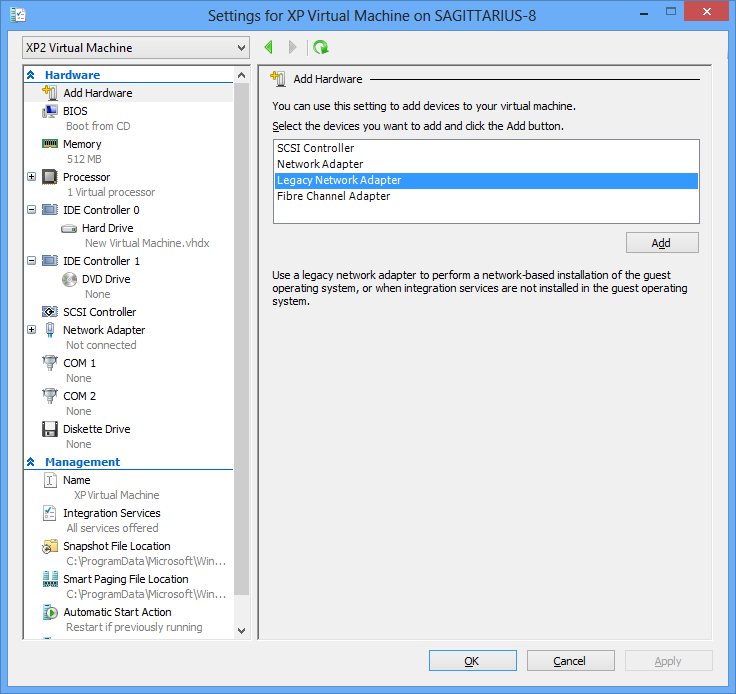 Because Windows XP is an old operating system, the first thing that you need to do is add a legacy network adapter.

If you have already configured a Virtual switch, just select it.

Now, move up the Hardware list and select the Memory section. I’m going to specify 1GB of RAM for my XP Virtual Machine. As you can see in Figure F, I’ve specified 1024 in the Startup RAM text box and left the Enable Dynamic Memory check box unselected. Even though the text box is titled Startup RAM, in the case of the Windows XP operating system, this will be the total amount of available RAM.

In other words, it will essentially be static memory. Being an older operating system, Windows XP is not supported by Hyper-V’s Dynamic Memory feature, so you’ll need to leave that check box unselected. The Memory Weight slider is designed to allow you to prioritize memory usage but it is related to the Dynamic Memory feature and so in the case of Windows XP we’ll just leave it as it is in the middle. 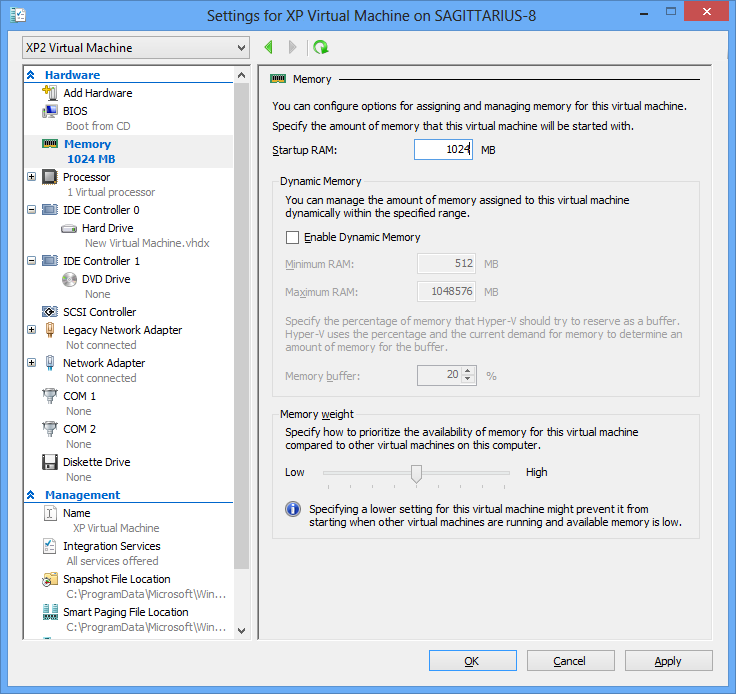 To continue, go ahead and click Apply to save your settings. Then move down to the IDE Controller 0 | Hard Drive section. 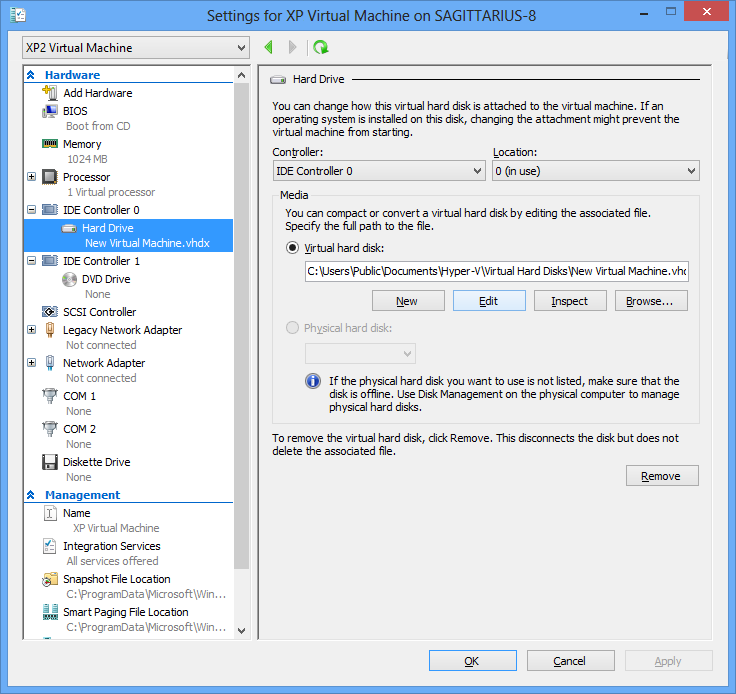 Chances are that you’ll want to expand the size of the virtual hard disk.

When the Edit Virtual Hard Disk Wizard appears, you’ll see that it immediately advances to the Choose Action page. You’ll then select the Expand option, click Next, and then specify the size as 500GB. These two steps are illustrated in Figure H. To complete the operation, click the Finish button. When you return to the Settings window, click Apply to save your changes. 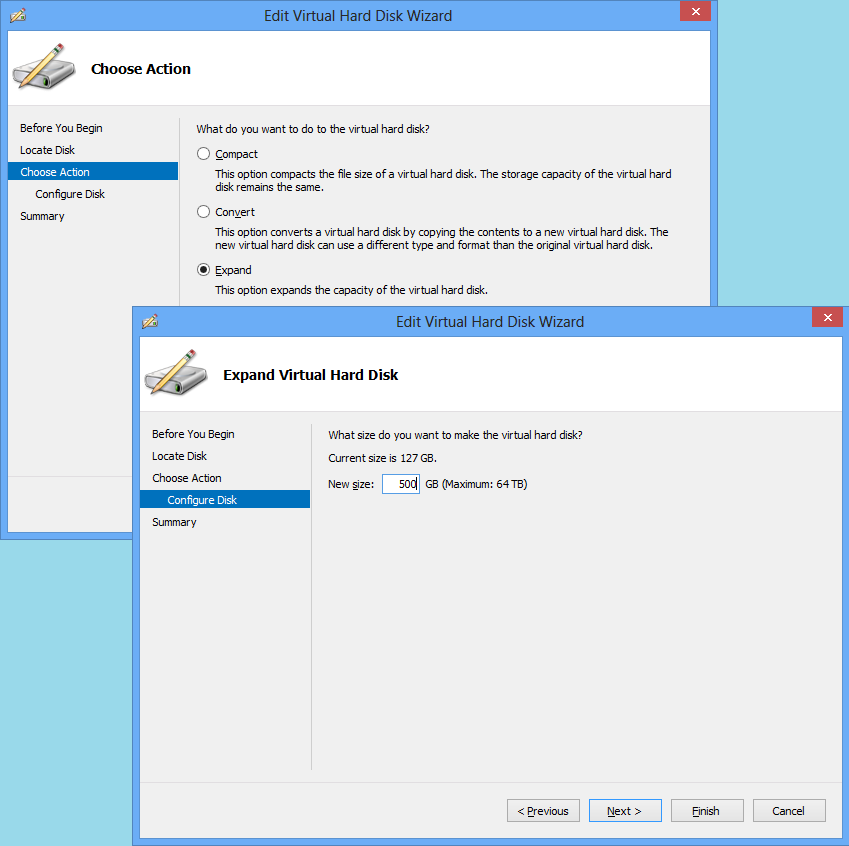 You’ll use the Edit Virtual Hard Disk Wizard to expand the size of the virtual hard disk.

Keep in mind that Hyper-V creates dynamically expanding virtual hard disks. This means that the hard disk only takes up as much room as needed and can only grow to the specified size. For example, clicking the Inspect button (next to the Edit button in the Hard Drive section) displays the Virtual Hard Disk Properties dialog box, shown in Figure I. As you can see, at this point the size of the virtual hard disk file is 4MB. As I install the operating system and applications, the virtual hard disk will grow in size until it reaches the maximum size of 500GB. 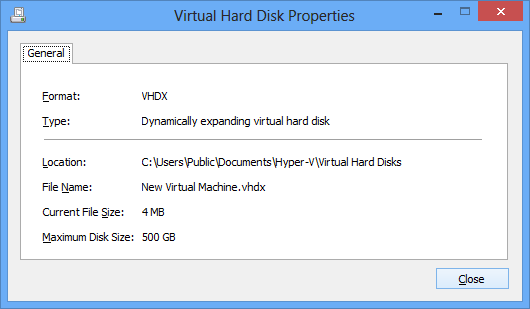 At this point, move down to the IDE Controller 1 | DVD Drive section and choose how you want to install the operating system and applications on your virtual machine. You can use ISO images files or the physical CD/DVD drive. As shown in Figure J, I’ve selected the Physical CD/DVD drive option and indicated the appropriate drive letter. This will make it easy to install Windows XP from the optical disc. Click Apply to save your changes. 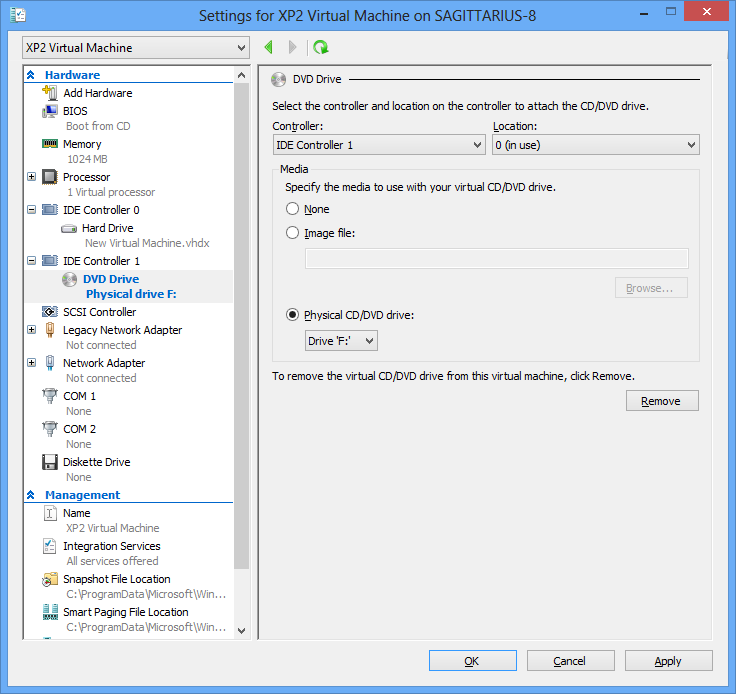 You’ll specify how you want to configure the DVD Drive that you’ll use to install the operating system and applications on your virtual machine.

Installing Windows XP in a Hyper-V virtual machine is easy. To begin, insert the Windows XP CD in the drive, go back to the Actions pane in the Hyper-V Manager, scroll down to the virtual machine section and click the Connect command. When you do, you’ll see a virtual machine window that tells you that the machine is turned off. At this point, just click the Start button on the menu bar, as shown in Figure K. 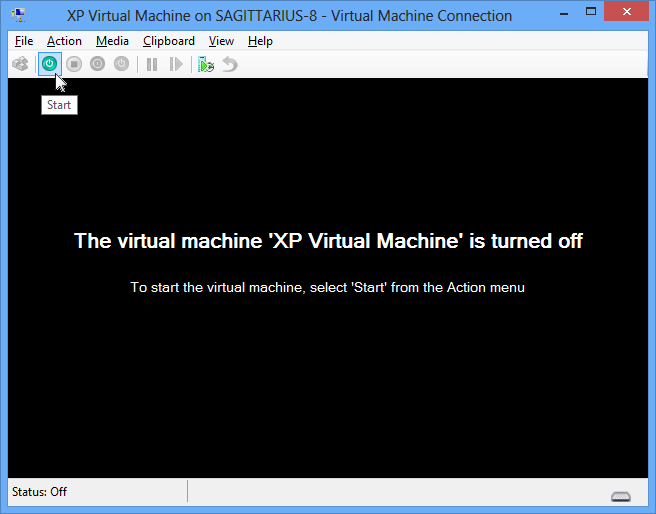 Click the Start button on the virtual machine window’s toolbar. 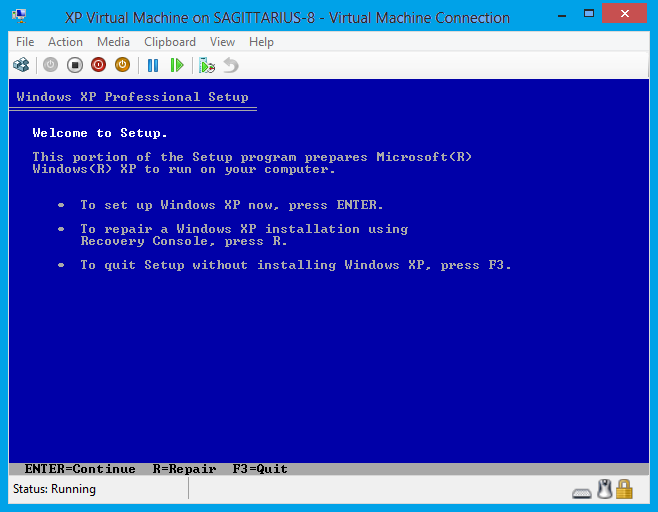 Seeing the basic looking Windows XP Setup screen in Windows 8 is quite a stark picture.

Once the installation is complete, you’ll see the Windows XP desktop in a virtual machine in Windows 8, as shown in Figure M. 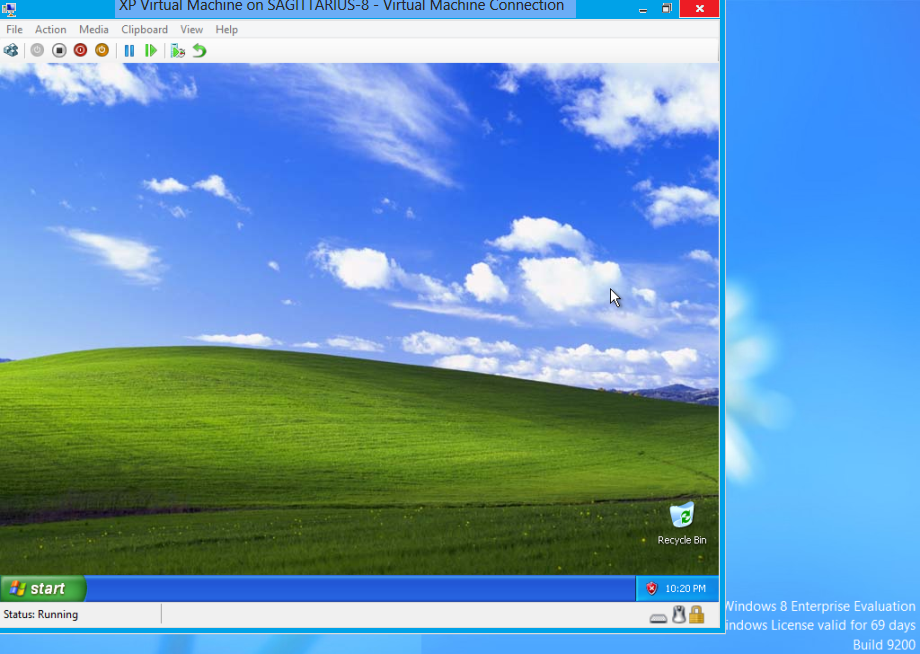 Once the installation is complete, you’ll see the Windows XP desktop in a virtual machine in Windows 8.

Have you had a chance to experiment with Windows 8 Client Hyper-V yet? Will you install Windows XP in a Hyper-V virtual machine in Windows 8? As always, if you have comments or information to share about this topic, please take a moment to drop by the TechRepublic Community Forums and let us hear from you.

Share: Install Windows XP in Windows 8 Client Hyper-V
By greg shultz
My first computer was a Kaypro 16 \"luggable\" running MS-DOS 2.11 which I obtained while studying computer science in 1986. After two years, I discovered that I had a knack for writing documentation and shifted my focus over to technical writing.