Science writer Jennifer Ouellette has covered fractal patterns in Pollock paintings, traffic physics, the physics of the curve ball, and much more. Read our interview with the author of The Calculus Diaries. 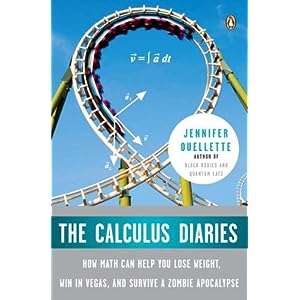 Science writer Jennifer Ouellette found her calling when she accepted a job as a writer for a group of physicists. It turned out that this English major who was once afraid of science and math has a knack for presenting physics concepts in lay terms. Ms. Ouellette writes books, blogs, and articles that investigate the physics behind such accessible subjects as the teacup ride at Disney World and fractal patterns in Jackson Pollock paintings.

She recently published a new book entitled The Calculus Diaries: How Math Can Help You Lose Weight, Win in Vegas, and Survive a Zombie Apocalypse. You can learn about physics from Ms. Ouellette’s avatar, Jen-Luc Piquant, at her blog, Cocktail Party Physics. JenLucPiquant is also her Twitter handle. In this brief interview with TechRepublic, Ms. Ouellette reveals what gets this physics-girl going.

What is your favorite Cocktail Party Physics anecdote?
Ouellette: Perhaps a better question is, what makes for a good cocktail party physics anecdote? And I think it’s something that answers an everyday question, or illustrates an unusual fact, with humor and a colorful personality or back story. EG, a British scientist who recently won the Nobel Prize for his work with graphene is also known for levitating frogs in the lab, listing his pet hamster as a co-author on a paper, and designing a kind of sticky tape modeled after gecko feet. You can’t make that stuff up!
Which Cocktail Party Physics anecdote gets the biggest reactions/ is most surprising?
Ouellette: Again, there’s not just one. I’ve started compiling cool items as links every Friday on the blog, as possible conversation starters for weekend parties. So we can all be prepared!
Your website says you “stumbled into science writing” — how did that happen?
Ouellette: I was living in NYC at the time, and had kind of lost my direction after deciding graduate school in English lit wasn’t for me after all. As I was floundering, trying to figure out how to break into writing, I took a job with a physics organization — you know, just to pay the bills while I figured some stuff out. They needed someone who could write well and wasn’t afraid of physics, or physicists. And I fell in love with science that way; it was the perfect career for me. Sometimes the universe surprises you in a good way.
Which of your books would you most recommend for the science geek with average knowledge (no special science-related schooling)?
Ouellette: They’re all intended for folks without specific scientific schooling. I’d probably recommend my latest book, The Calculus Diaries, to start, and if you’re interested in physics history, my first book, Black Bodies and Quantum Cats, is a collection of short pieces focusing on great moments/personages in physics history, woven in with books, plays, music, and pop culture. I think The Physics of the Buffyverse is my favorite — it was certainly a blast to write — but it’s the most fan-centric of the bunch. 🙂 Folks who haven’t at least seen a few episodes of the show [Buffy the Vampire Slayer] might not be interested.
How did you invent your alter-ego, Jen-Luc Piquant?
Ouellette: It started out as a joke; some friends had taken to calling me “Jen-Luc,” and I thought it would be funny to name the blog avatar Jen-Luc Piquant — an obvious nod to Captain Picard, but also capturing the lighter tone I hoped to bring to a science blog. And she quickly took on a personality all her own.
Your list of topics covered the range from the acoustics of the Mayan Pyramids to fractal patterns in Pollock paintings. Which topic was the most interesting to write about?
Ouellette: The really cool thing about science is that you never run out of fascinating things to write about. I’ve covered things like why woodpeckers don’t get headaches, traffic physics, the physics of singing sands, the science of yodeling, and where opals get their color (hint: photonic crystals). Acoustics is a perennial favorite, along with biophysics, because those tend to be topics that naturally meld with other areas: art, architecture, music, robotics, cancer cures, and so forth. Ultimately I’m looking for interesting stories to tell, that have a physics/science component. EG a recent blog post focused on the physics of the curve ball and how one lone physicist joined forces with professional pitchers in the 1950s to prove the ball really does curve; it’s not just an optical illusion.
The Cocktail Party Physics blog features science-oriented cocktail recipes. Which is your favorite?
Ouellette: I’m partial to the Heavy G, but the Combustible Edison is great fun at parties, and Listening to the Drums of Feynman tastes great over vanilla ice cream. Honestly? The cocktails are chosen more for their science themes than actual taste. 🙂 My all-time favorite cocktails are the classic Sidecar, Pisco Sour, and Caipirinha.

[The cocktails are featured in the far right column on her Cocktail Party Physics blog.]

Where do the cocktail recipes come from?
Ouellette: Most are from The Bartender’s Bible, pretty much required reading for the budding mixologist. But occasionally I come across interesting cocktails through friends’ recommendations, e.g., the soon-to-be-added Buzzed Aldrin.

Check out this video of Ms. Ouellette’s recent appearance on The Late Late Show with Craig Ferguson.

Thanks to Ms. Ouellette for answering our interview questions and to TechRepublic’s Selena Frye for the video link.

Related: For more physics books recommendations, read my Geekend post Books that make physics accessible to the average geek.
(Disclaimer: The Late Late Show with Craig Ferguson is a CBS show, and TechRepublic is a CBS Interactive brand.)

Delivered Weekdays
Sign up today
Share: Interview with Cocktail Party Physics blogger Jennifer Ouellette
By nicolebremernash
Nicole Bremer Nash is Director of Content and Social Media for HuTerra, where she uses SEO and social media to promote charitable organizations in their community-building and fundraising efforts. She enjoys volunteering, arts and crafts, and conducting science experiments at home. Nicole has a Bachelor of Arts degree in English from Transylvania University, and has experience in copywriting for education, print, business, and the web. You can find her on Facebook and Twitter via @HuTerra.