iPhone and Surface: The moment Apple and Microsoft diverged

In June 2007, both Apple and Microsoft were poised to reinvent computing. Only one of them delivered, and it changed the destiny of both companies.

When the news broke recently about Microsoft launching an $8,400 version of its multitouch tabletop, the Microsoft Surface, I couldn’t help but shake my head and remember how much promise the Surface had when it was first unveiled over four years ago at the D5 Conference. 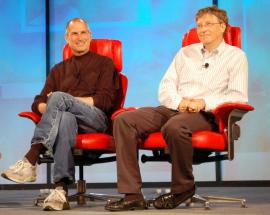 That was the same D5 Conference where Microsoft’s Bill Gates and Apple’s Steve Jobs made their historic joint appearance (right). But, in retrospect, the Jobs-Gates interview wasn’t the only historic thing about D5. If there was a single moment where the destinies of Microsoft and Apple diverged, it was D5.

Nearly all of the buzz of D5 was centered around two products: 1.) The Microsoft Surface, which Steve Ballmer unveiled to the public on the opening day of the event, and 2.) The iPhone, which Apple had announced earlier in the year and which was about to go on sale a month later.

There was a sense that these two products were ushering in a new era in computing where multitouch devices would finally displace the old keyboard and mouse as the easiest and most common way for the masses to interact with computers. That optimism would later get tempered among technophiles — especially when tablets launched a few years later — but, at the time, multitouch had the tech world dreaming big dreams.

Tech enthusiasts were already anticipating that Apple would eventually bring the iPhone’s touchscreen interface to the iPod and to an Apple tablet (there were already rumors). Of course, Apple did both — the iPod Touch and the iPad — and they turned into wildly popular products. Some even suggested that Apple would turn Macs into touchscreen devices. That never happened, but with oversized trackpads, Mac OS X 10.7 “Lion,” and a full array of new touch gestures, Apple has taken some baby steps toward bringing multitouch to the traditional computer.

It may be difficult to believe today, but at the time of D5 it was generally expected that Microsoft would take the Surface and run with it to build a line of multitouch products to revolutionize desktop computing. It looked like the two big computing giants who had done battle at the birth of the PC were about to go head-to-head again to take the PC to whole new level

For Microsoft’s part, while the tech world was jazzed about the Surface, the excitement wasn’t about the Surface itself, but the fact that Microsoft was working to embed computers into natural surfaces so that the future of the PC might soon break out of the model of dedicated machines sitting on top of a traditional desk.

“The view is that every horizontal and vertical surface will have a projector,” said Gates at D5. “Your desk can be a surface that you can sit and manipulate things.” In other words, the desk itself would become the computer instead of the computer sitting on top of it.

Unfortunately, that vision turned out to be too abstract and expensive to implement. The Surface itself barely trickled its way into the market, mostly in a few casinos in Las Vegas (until the recent news about broader availability). Microsoft never translated the Surface’s technology to its core product lines. The company’s one big multitouch project turned out to be the HP TouchSmart line of touchscreen appliances, which no one ever really figured out what to do with.

Microsoft would later bring multitouch devices like the Zune and Windows Phone 7 to market, but these were essentially “me too” products that followed in the footsteps of Apple’s devices. Microsoft completely missed its big opportunity to take the PC market by storm with multitouch.

In the meantime, Apple has sold over 250 million iOS devices — iPhone, iPod Touch, and iPad — and overtaken Microsoft as the world’s most valuable technology company.

Although the divergence between Apple and Microsoft began at D5 in June 2007, when both companies had a promising multitouch future, it took years for the events to play themselves out. It wasn’t until three years later on May 26, 2010 when Apple ($222 billion) passed Microsoft ($219 billion) in market value (a.k.a. market capitalization) that the tech world did a double-take and realized that Apple’s decade-long comeback was no fluke. It had turned the tables on its old nemesis.

To put this in perspective, when Gates and Jobs shared the stage at D5, Microsoft was worth about $300 billion and Apple was worth about $100. As I write this article (November 21, 2011), Microsoft is valued at $210 billion and Apple is worth $343 billion. Take a look at the chart below, which shows the market value of Microsoft and Apple, from June 2007 to September 2011. (I recorded the market cap in three-month increments based on the stock price on the first day of the month.)

What we find is a similar story. In June 2007, Microsoft was making about $14 billion per quarter while Apple was making $5 billion per quarter. In Q3 2010 — the quarter after Apple passed Microsoft in market cap — Apple also passed Microsoft in quarterly revenue with $20 billion for the quarter compared to Microsoft’s $16 billion. The disparity has only increased since then. In the most recent quarter, Q3 2011, Microsoft made $17 billion and Apple made $28 billion. In the chart below I’ve compiled quarterly revenue for the two companies for every quarter since Q2 2007 when Jobs and Gates did their thing at D5.

All that said and even with tablets eating away at the PC business, I don’t think things are totally hopeless for Microsoft in terms of innovating in multitouch. Its vision of touch-based surfaces was simply an idea that was ahead of its time, and there’s evidence that there are still people inside Microsoft thinking about and working on this stuff.

But, the company still desperately needs a product leader. My ZDNet colleague Ed Bott and others seem to think Windows chief Steve Sinofsky is that guy, but I’m not convinced yet that Sinofsky is a breakthrough innovator. I haven’t seen anything in Windows 8 that makes me think it will change the way people use computers for the better. I still think Microsoft’s biggest opportunity is to grab leadership in PC-smartphone convergence, even though I doubt the company will have the courage to do it since it would mean potentially cannibalizing some short-term Windows sales. But, if Microsoft doesn’t make that kind of bold move, it certainly won’t be in the same league as Apple again, at least not any time soon.

Share: iPhone and Surface: The moment Apple and Microsoft diverged
By Jason Hiner
Jason Hiner is Editorial Director of CNET and former Editor in Chief of TechRepublic. He's co-author of the book, Follow the Geeks.